November 09, 2014
This post is here because earlier today someone asked me to think of a reason to build a scholarship. I thought of Jessie.

Jessica Justice was a dishwasher that became a scientist.  This is what I wrote about her, and it was published on April 7, 2010 on Skepchick.  Make sure you read the next post tomorrow.  If this moves you at all, tomorrow will bring tears.

The topic is important today as it was then, and your note is still priceless Jessie.

Science Needs Women
Kevin M. Folta
In three weeks I will put on the cap-and-gown professor outfit I bought on Ebay and witness something that probably never should have happened: the graduation of a self-described dumb blonde. Jessie came to my laboratory looking to make some extra cash as a dishwasher. Little did she know that she would be remolded, repackaged and refocused by a cadre of women that identified a change that needed to happen, then took the initiative to make it so.
In my laboratory the ratio of X to Y chromosomes is traditionally skewed to about twelve to one. The reason is not clear, but the majority of the technicians, postdocs, grad students and undergraduates in my program are female, and it has always been that way. One residue of the phenomenon has been that I get to observe the powerful influence that strong women have in shaping the career, and sometimes personal, choices of young women entering science.
It happens every semester, but Jessie was the most stunning example. She would take on simple tasks like dishwashing and lab maintenance with a certain care and precision not seen in most twenty year olds. But when I asked her if she’d like to take on a laboratory project all she would say is, “I probably can’t do it, I’m not smart enough.”
That sentiment was echoed every time she was assigned a task. She had self esteem that was so low it defied accurate analogy. Yet every time I would show her a technique, computer program or protocol she would execute it flawlessly after a flurry of “I probably can’t do it” and “I’m not smart enough.” I don’t know why she was so eternally self-deprecating, but it was sad to see her downplay, if not completely discount, her inherent talents and abilities.
The women in my lab took special notice of this situation. At the time there was a technician and three graduate students, all balanced, opinionated and strong. Most of all they were complete, with good relationships overlaid with conspicuous hint of glamour. They were maybe four years older than Jess, making their influence especially strong. They dug one layer deeper into Jessie than I would want to; discovering her dysfunctional relationships with males, her horrendous daily decisions and the penetrance of her miserable self perception that negatively impacted many facets of her life.
Leading by example, they showed her that women could drive science and lead a high-powered research team. They cultured her talents, supported her good decisions and taught her flawless execution of advanced scientific tests. Their influence would escape the walls of the lab, as they’d reprimand her when she’d talk about the dopes she’d date and the poor decisions she’d make at home. Soon, the growth was visible and rapid. The self-described ugly duckling was changing.
After a year in my lab with Dawn, Stef, Denise and Thelma, Jessie left to pursue advanced training within her major. She wrote up her work, turning in a graduate-level synopsis of the literature and her results. She had a visible sense of confidence, a new maturity and poise that contrasted so starkly against that of the “dumb blonde” that started in my lab only a year before.
Last week, years after she left my lab, I received a tiny card in my university mailbox buried amongst the junk mail. Inside was an invitation to a graduation. From Jessie. Adjacent to the time, date and event details was a handwritten note. “Thank you for teaching me how to think critically.” 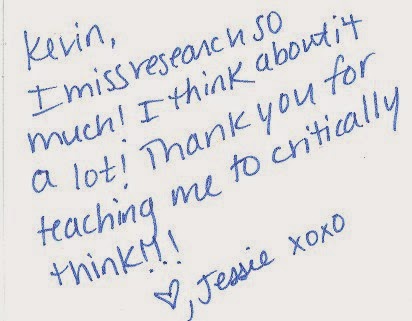 One of the most important messages I ever received.

Sure, maybe I had a hand in it, but the best thing I did was mentor four stellar women scientists that took the initiative to guide her.
The rare success of a grant funded, a scholarly paper accepted, or putting the hood on a new Ph.D. are all wonderful, memorable moments in the life of an academic scientist. However, this victory was especially sweet. I folded that card inside-out, permanently wedged it into the frame of my office bulletin board, and then sent congratulatory emails to the four women that changed Jess’s thinking, influenced her decisions, and maybe even saved her life.
****  This post was first online in April of 2010.  In January 2012 we would suffer a tremendous loss. The next post details that tragedy ***