Hi Everybody!  It's me!  You might think you know me as an academic research scientist that is dedicated to training undergraduate and graduate students, helping science link real solutions to agricultural questions, and thinking of novel frontiers in genomics and other basic science.

You might also recognize me as the scientist that interacts with the public, teaching the science behind transgenic food (GMOs), climate change, evolution, vaccination, and other hot button issues that shouldn't be.  I'm glad to talk to people that disagree with me, and do it politely. Most of the time.

But my cover has been blown. See, according to one anti-transgenic advocate-- I'm a dupe for Pepsico.  Confused?  Me too until she explained.

(this is all public on Natural News comment thread, so I'm just reposting-- no violation of her privacy, and she'd appreciate me getting her message out in more places I'm sure)

While chiming in on the narrow-mindedness of labeling transgenic food (a topic in queue for this blog) I met with Ms. Lilia and used scientific evidence to provide a general debunking of transgenic food topics, where the reputation of this sound technology has been sullied by many.

She provides the same tired old articles in low-impact journals that were never repeated, or parrots the old distortions that she believes, but can be easily analyzed as not true.  So instead of addressing the science, she goes after me.  Worse, she goes after my institution, the University of Florida, and its 3000 faculty.

Oh No!  I've been found out!  First I'm practically Kevin Bacon's cousin and now this!
Our whole university is a dupe for Pepsico, brilliant on their behalf, as somehow Pepsi made the
university decades before there was Pepsi!

This is pretty lame stuff. Calling my work bogus because of some contract?  I guess I'm particularly saddened because I feel great pride in being part of this faculty.  As a land-grant institution we take our mission of public education and service very seriously. It has been such a pleasure to work with farmers, students and other stakeholders in our State.  But alas, we are all shills for Pepsico.  We must be, heck, they licensed a product created by a UF scientist.  In fact, Pepsi probably hired him and forced him to create that product so that they could license it from us and pay royalties for decades to come.

Quite an indictment! Our University is run by Pepsico!
We do have Pepsi vending machines...

Here her evidence of Pepsi's deep influence on university science and technology is presented, noting that UF is "basically run by Pespsico" and that she does not believe that I have "no personal stake in (the GMO) argument."

I do take it personally.  She is impugning my integrity as a scientist, something I've trained for since the mid 1980's.  Plus it goes farther than that, personally.  I know that we have some nice transgenic tools in the lab that would be of great benefit to farmers and consumers, but they are DOA other than as research tools.  We could never afford to navigate the regulatory maze that would be required for commercializing a transgenic plant.  That is a tremendous personal disappointment.

And you should check out the thread on Natural News where I describe to her  in scientific detail why it would be inappropriate to label transgenics without labeling any plant material generated through human intervention.  Please read- I make the sound scientific argument.

So here a civil, polite and scientifically evidence driven discussion on my part, ends with the assertion that I'm a paid stooge for Pepsico, along with every other faculty member at UF.  She really thinks this.  What is scary is that she thinks this, but if you read the Natural News thread she clearly is intelligent, articulate and passionate.  She's one of the good ones!

The last thing I'll post is my reply to her direct allegation.  I hate to even pay credence to such things, but it is on a thread populated by anti-science goofballs, so perhaps a little gentle defense was in order... 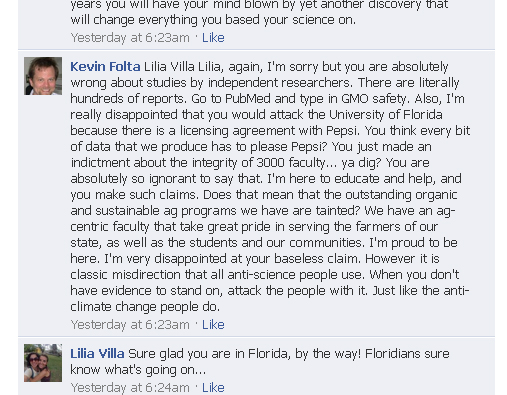 And I have absolutely no idea what that last comment means. Ya dig?

To conclude, I thought I might list just a few examples of published research coming out of University of Pepsi.  It is a shame these are all frauds and based on Pepsi's approval, as they are performed by wonderful, caring people that have a mission as teachers, scholars, and stewards of society and our planet. We are people that have turned away from lucrative corporate opportunity, fight for every dollar, and work sixty hour weeks throughout our careers to remain competitive.

-- Here is the UF Biofuels Plant.  Allegedly remediating plant waste to make renewable energy.  According to recent commentary, it likely really is just a way to make Diet Pepsi.

-- My department's Organic and Sustainable Agriculture emphasis is one of the best in the nation. Strike that, the best.  Wonderful faculty, and rapidly growing with new students that care about sustainable ag and want it to be their career.  Too bad they are working for Pepsi, right?

-- and efforts to assist small farms and promote local produce are just a facade, as Pepsi is pulling the strings...

I could go on and on, but I won't.  It is Saturday, going on noon, and I have the pleasure and privilege to be able to go to work today at a kick ass job that helps people.  I get to think about big ideas, new science, and how to be a better teacher.

I was just blown away by such brainless allegations.  They illuminate the point that if you can't raise your argument, raise your voice or cast aspersions to misdirect the discussion.