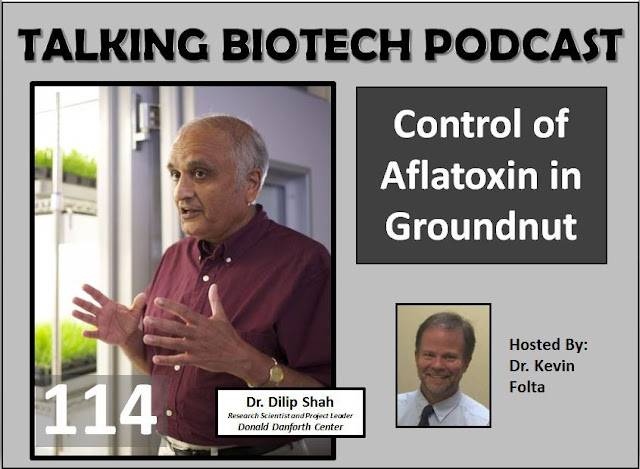 Aflatoxin is a potent carcinogen.  It is produced by a fungus that grows readily on corn and peanuts, known in the Developing World as 'groundnuts' (which makes more sense IMHO).  Billions of people suffer from chronic exposure. Dr. Dilip Shah was part of a team at the Danforth Center that created solutions to solve this problem.  On this week's podcast we talk about those solutions, and how they may lead to better health around the world.

"Expert" Commentary on a Paper They Didn't Read

The story of canola oil causing dementia and memory issues seems like old news.  But I received an email that it has popped up again in the wacky press, another alleged expert weighing in on this obvious relationship that actually is not even remotely supported by the data in the paper.  These cases are especially egregious because these health-oriented websites get huge traffic, and lousy information is consumed rapidly and shared widely. 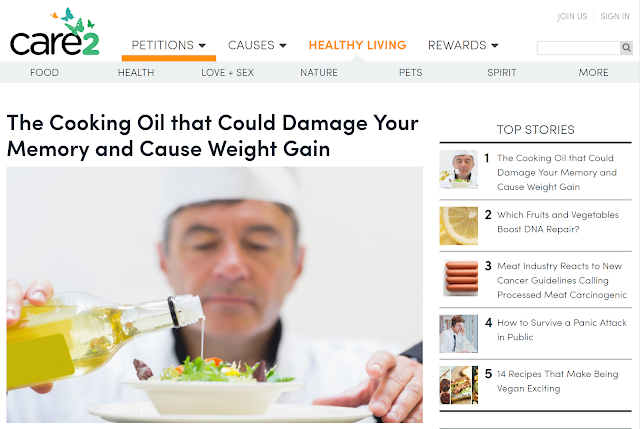 The claim emerges again, but this time with a new twist!

The author, Michelle Schoffro Cook didn't even read the paper, but is happy to lend her opinions that further advance this misinformation, along with a dandy of a tangential spin.  How do I know she didn't read it?  She notes in her analysis that it was published in the journal Nature.  It was not.  Nature wouldn't touch this paper with a 10 impact factor pole.

It is not a bad paper.  It is not a good paper.   I would not have done the experiments that way, but the authors reported how they did it and only slightly overstepped the data in their Discussion.

The problem is the university communications office that turned a few data points into a national culinary catastrophe.

This is an article that appeared in Real Clear Science, and details the emotional hardship of seeing a problem and a solution separated by a barbed-wire fence. 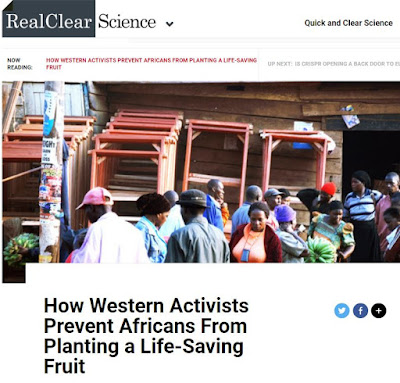 To the Easily Offended,. Lighten Up.

In the news, the CDC was apparently told to not use seven words/terms in its internal documents. I've seen other examples like this, as in my state where the Governor does not allow the terms "global warming," "climate change," or "sea-level rise" in official documents.

So on a Saturday morning the creative juices are flowing and I made a funny list of alternatives. Yes, it is funny.  "Humor arrr arrr," as Mork would say. 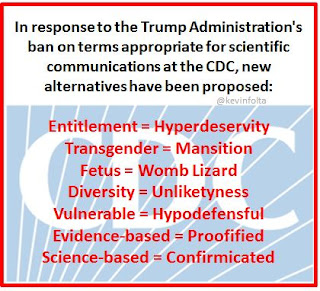 But it is 2017 (still, please make it stop) and with every harmless, funny intention comes the outrage.

Turns out that some small gaggle of folks find the term "Mansition" a slam to the transgender community.

First, I have a lot of empathy for transgender people.  Not only do I recognize the challenges of having an identity that is traditionally forced into one box or the other, I also understand its personal and damaging implications of surviving in an intolerant world.  I stand up for this community as I understand the potential biological origins. To me, not fitting conveniently into one gender box or the other is is completely perfect, normal, and explainable outcome of human development.

I've known trans people and have great respect for their struggles and frustrations.

Once again, go back to intent.  Was the intent of this infographic to install a new vernacular?

No. It was to give folks a smile on a Saturday morning.

But if you think it was serious, do you think that my intent was to "reduce the spectrum of identities" of trans people?  Brand the unborn as reptiles?

Give me a break.

Plus, if you are a trasgenderperson, you are by definition identifying at the start or destination as more traditionally male characteristics, or are somewhere in between.  "Mansition" kind of works.

So before you start the hate mail to me or my employer, please step back, take a breath, and ask about my intentions.

Anyone who knows me is aware that I would be the first person to step in an defend anyone in the LGBT community if they were being harassed.

That's why this funny list of new terms almost didn't happen.  I could not think of something for "transgender" that some (ugh) of the hyper-offendible would bend the meaning outside of its intent and suggest as a hateful epithet.  "Mansition" seemed to elude potential for wrongful interpretation.

But leave it to the internets of meaning benders to make a neutral, humorous term into hate speech.

I'm sorry if this offended anyone, that was not the intent.

However, I'm standing by this one and will not take it down.  And keep in mind that if I experience repercussions because of the willful misinterpretation of meaning and intent, you will remove a strong empathetic supporter and defender from the cause.

Put your outrage somewhere else. This is not a good investment. 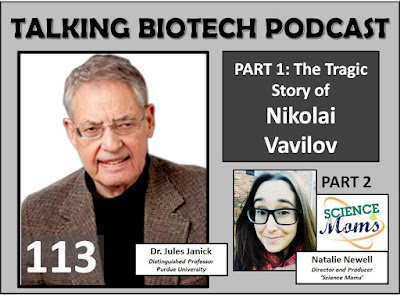 Can politics shape science into disrepair?  Can government decisions harm people and long-term progress?  These questions were answered in the tragic story of Nikolai Vavilov.  The story is told by Dr. Jules Janick, Emeritus Professor from Purdue University.  In the second half the film "Science Moms" is discussed with Natalie Newell.  The complete episode can be found here, or anywhere you consume podcast media!
at December 16, 2017 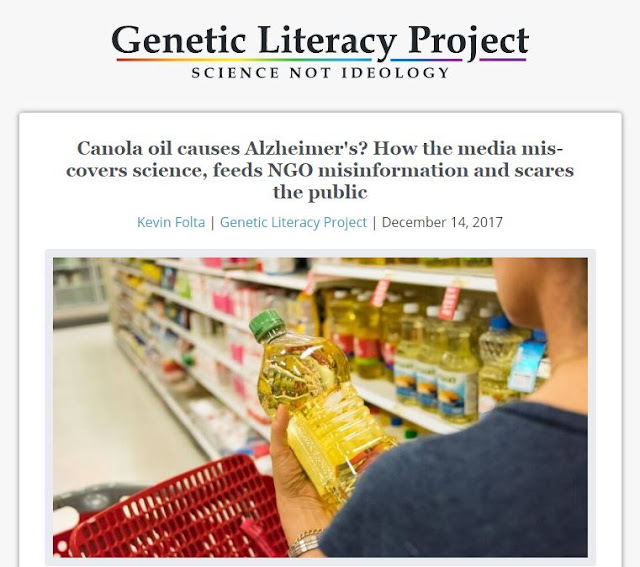 The manufactured hyperbolic connection between canola oil and Alzheimer's Disease is a perfect example of how a grain of research is extrapolated to wild new proportions. 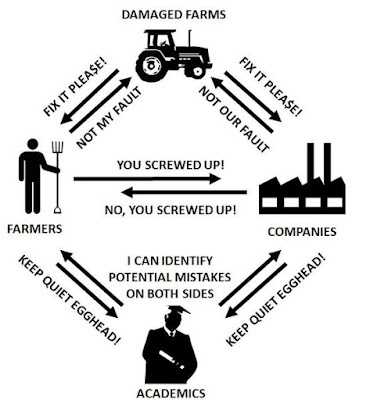 The herbicide dicamba has been implicated in substantial off-target movement and crop losses.  But what is the whole story?   I wrote this article for Real Clear Science with Cameron English.
at December 12, 2017

No Evidence that Canola Oil Causes Dimentia and Alzheimer's Disease 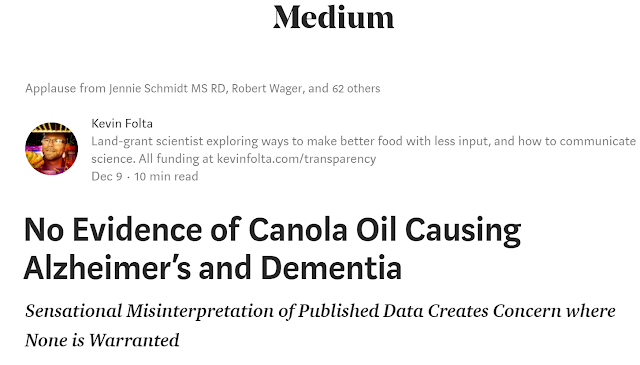 I posted this article over on Medium.  It shows how a set of experiments in mice prone to Alzheimer's like brain pathology were wildly misinterpreted to create a sensational headline that the media promoted everywhere.
at December 10, 2017

Canola Oil is Not Causing Alzheimer’s and Dementia


Misinterpretation of Science Extrapolates a Bogus Claim
The headlines are remarkably clear — if you eat canola oil, you’ll soon not remember that you ate canola oil. The media exploded with their interpretation of a peer-reviewed scientific report in the cleverly named journal Scientific Reports. The spate of internet articles from any Google search indicates the link between canola oil and leaky mental gaskets is as clear as canola oil.

Why Would the Media Get This So Wrong? My feeling is that it is our continued cultural war on food. Canola is a new crop, made from selective breeding in Canada to produce a new high-oil seed. It also is genetically engineered, and the web is alive and well with claims that it is the magical “GMO” entity that is causing dementia. Just go take a peek for that.
A relatively new crop, using genetic engineering, to make an oil used on a massive scale? It is the perfect punching bag for food activists that don’t understand the chemistry, but certainly know how to over-interpret the results of a reasonable, but statistically underpowered report.
In researching this topic I was surprised to see the plethora of anti-canola rhetoric on the web. Misinterpreting the data from this paper fits well into that agenda.

In Conclusion. The test that directly compares multiple kinds of oils with controls will be most welcome. Others have done such studies using olive and palm oils, and shown some nice, direct comparisons. For now, I’ll keep eating canola oil. No problem here, as these results do not indicate any ill effect on human health, and show slight effects on messed up mice.
Again, just overstatement of a sensation hungry media blowing up more nonsense about the safest food supply in human history.

Kevin M. Folta is a Professor and Chairman of the Horticultural Sciences Department at the University of Florida. He teaches science communication workshops for scientists and ag professionals, and hosts the weekly podcast Talking Biotech. His research funding and cost reimbursements may be seen at www.kevinfolta.com/transparency.

What's Up With Dicamba? 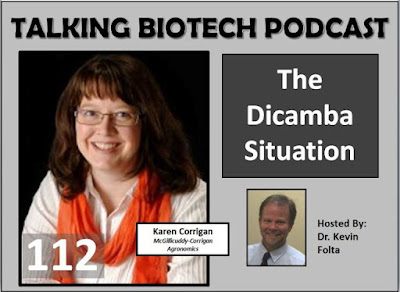 Problems caused by off-target migration of dicamba herbicide have created great divides across agriculture. Between companies denying culpability to farmers damaged and academics in between, the situation has horrible optics for agriculture.  Those looking in see unintended consequences, uncertainty, and all of their worst nightmares coming true.  The effect will be slower registration of future (desperately needed) herbicides and other farm inputs, and perhaps increased skepticism of claims about the safety of modern agriculture.

To add clarity to the situation we discussed what is happening with agronomist Karen Corigan.  This week's podcast. \