Wolves in sheep's clothing?  It is an interesting question because I've never seen a sheep wearing clothes.  I guess what it really means is that if  a wolf could skin a sheep and wear the wool to basically be a trojan horse. Something like Silence of the Lambs.

I've always suspected that a number of apparent "good guys" of consumer advocacy are really just anti-biotechnology interests. Their recent activities have confirmed my suspicions.

Over the years I have watch the Organic Consumers Association and the Center for Food Safety rail against biotechnology as it applied to crops. They falsify evidence, bend the truth, and vilify scientists. You can go to their pages and read that I'm a booze-swillin', wife-beatin', child harassin', drunk-drivin' a-hole that is paid by Monsanto to lie about science.

Because I teach science.

Now that their nemesis Monsanto is no longer a thing, these groups must be falling on hard times.  Their most recent targets?  Biotech mosquitoes.

The genetically engineered mosquitoes by Oxitec are a modern version of sterile insect technique, a method to rapidly suppress mosquito numbers that has been used for over half a century.  Its modern form is much more precise. Briefly, male mosquitoes contain a larvae-lethal gene. The gene is turned off in the lab, but then it is activated upon release. The males mate with local female pests, and the next generation of larvae are inviable. Mosquito populations crash. The target is a non-native invasive mosquito so it poses no threat to natural ecosystems.

These disease-transmitting mosquitoes are clearly the most lethal animal on the planet. With Zika, Dengue, chikungunya, malaria and other mosquito-borne diseases on the rise, these tools could have great human health implications.  They are to be released in the Florida Keys shortly.

Now technically birds eat mosquitoes, so the Center for (Bird) Food Safety might have a point.  But the Organic Consumers Association?  I haven't been to Whole Foods in a long time, but maybe they are selling mosquito larvae for $40 a pound.

Cool if you are an organic consumer, but does OCA really represent your interests when it promotes fighting a proven technology that can aid public health?
Not to be outdone, the Center for Food Safety also is in the anti-biotech mosquito game. Recently they were bragging about their new billboard on Twitter. Yes, the Center for Food Safety spends their budget on expensive billboards that oppose human health initiatives. 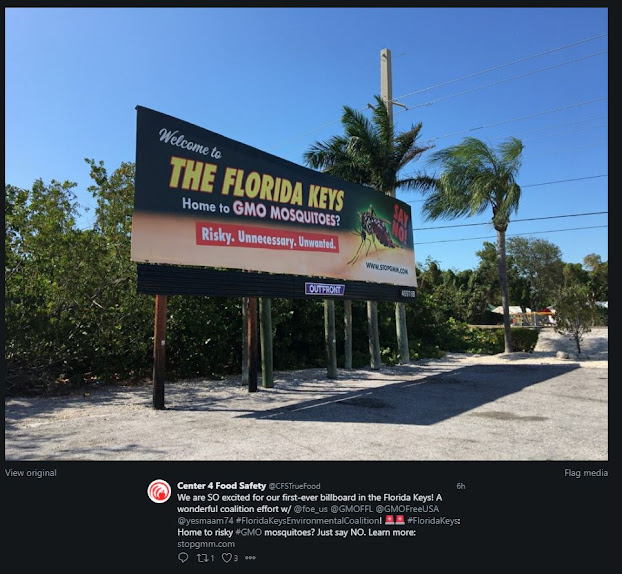 The Center for Food Safety is "SO excited" about their first-ever billboard in the Florida Keys, an effort to manufacture risk against all evidence, impact tourism, and essentially harm a local economy to push their agenda.

In social media, OCA has bots that spam the interwebs, blasting a common, repeated message over and over again.  The goal?  To make it look like there is widespread concern about a safe and effective strategy to limit numbers of disease-causing mosquitoes. 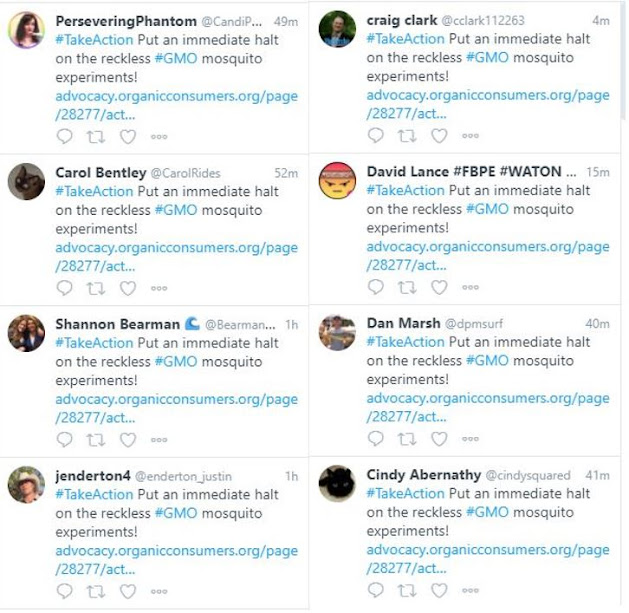 The wolves in sheep clothing use façade accounts and bots to swamp Twitter with identical messages to make it look like mass rejection of a good technology.
Here we have organizations that present as food advocacy groups that really are anti-biotechnology groups.  I can't wait for the day that these insect-limiting strategies are widely lauded for their success in curbing transmissible disease.  Maybe they will finally be held accountable.
Probably not. They have been lying about technology for three decades and the dollars keep rolling in.
Maybe if we all share these kids of stories we can clue people in to their deception.
You can learn more about the Oxitec mosquito strategy here on the Talking Biotech Podcast.