I would not believe it if it did not happen to me.


I get an email, out of the blue, that makes zero sense.

Even though I have no idea about what this is, I don't hesitate to invite myself for lunch and talk about trees...

So Sue writes me back, looks like lunch time!!

She then calls me and it turns out that she's at a conference down the street and there's an opportunity to network with a palm breeder.  He's bred new types of palms high in healthful oils, but they can't grow them in Florida because it is too cold.  These are equatorial trees with no cold tolerance. Still, maybe there's some cool tricks we could do to make it work here.

Unfortunately I had to decline because lunch was scheduled for 12:30, but was delayed because the conference was running late. I had an errand to run and then be at a graduate student orientation meeting at 1 pm.

I was driving on my way to the errand when my phone rings.  It was Sue, and it turns out that they moved the lunch up an hour to 12 noon.  I was literally in front of the conference center where the lunch was being held, the timing now worked, so I turned into the driveway and went in for lunch.

We all gathered a plate from the buffet and I sat next to the palm breeder.  We had a good conversation about hybrid palms and potential use for oil plants in Florida.

Suddenly he starts making a grunting noise.  He does it again and it is clear that he's choking.  Just as I learned, I stood behind him, gave him two blows between the shoulders with my the palm (go figure) of my hand, then reached around and delivered the Heimlich maneuver.

The blockage cleared.  He sat, took a deep breath, and I sat down and shaky from the adrenaline rush.

When I look back at the strange turn of events that placed me in to the right time and place, it is pretty amazing.  But do you want to know the weirdest part?

The lunch was in the exact same room of the conference center where I took the CPR / Heimlich class.

Beware.  The underhanded elements of the anti-GM world are now impersonating scientists and companies in the electronic media.

A few weeks ago I received a frantic email from a plant scientist I know needing advice.  I'll give details soon.

In general, he was the organizer for a plant biology conference where transgenic (GMO) plants were part of the discussion.  Activists bought a URL similar to the conference URL, then sent emails using a corresponding email account, using his name in an attempt to defame him.

They wrote fraudulent emails with harmful content.  The idea was to cause harm to his reputation and the conference. Several emails were sent that may impact his career, and certainly they have caused him substantial grief.  Poor guy.  He's a good guy with a great family and wonderful students.  Yet there are those out there that want to hurt him and damage his career.

Today a website showed up on the internet at www.monsantoglobal.com .  This site is a direct mock-up of the Monsanto's template but the content has been changed to reflect incorrect and even malicious information. 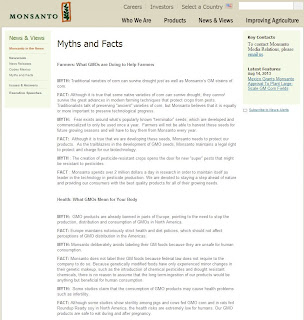 Fake websites that look authentic.  Impersonation is the most sincere form of flattery. My guess is that there will be a little lawsuit coming down on this one. The big MON usually ignores the harassment, but this may have crossed the line.


This is copied right from the page:


MYTH:   Fear exists around what’s popularly known “terminator” seeds, which are developed and commercialized to only be used once a year.  Farmers will not be able to harvest these seeds for future growing seasons and will have to buy them from Monsanto every year.
FACT:  Although it is true that we are developing these seeds, Monsanto needs to protect our products.  As the trailblazers in the development of GMO seeds, Monsanto maintains a legal right to protect and charge for our biotechnology.
MYTH : The creation of pesticide-resistant crops opens the door for new “super” pests that might be resistant to pesticides.
FACT : Monsanto spends over 2 million dollars a day in research in order to maintain itself as leader in the technology in pesticide production. We are devoted to staying a step ahead of nature and providing our consumers with the best quality products for all of their growing needs.

The bottom line is that these are boldfaced lies.  There is no "terminator" seed and Monsanto is not even a "leader in the technology of pesticide production".    Absolute crap.

What this tells me is that when you can't convince people with fake science, they need to impersonate scientists and biotech companies in an attempt to deceive.

So when you get the insane email from Kelvin Folate please consider it with the greatest of skepticism.
at August 14, 2013