The response from plant biologists was a unified "YIKES!"

Colchicine?  Really?  That's the stuff we use to wreck biology, or at least give its decedents too many chromosomes.

A recent press release exclaimed the therapeutic effects of this regent in the treatment of COVID19.  A clinical trial of 6000 planned individuals was performed in a double-blind, randomized, placebo-controlled, multi institutional study. The study was piloted by the Montreal Heart Institute. Other international institutions are also examining its effect in separate clinical trials.

Colchine is derived from the crocus flower, and is best known for its ability to arrest cell division by disrupting the molecular cables that attach to chromosomes. These tiny fibers pull normally pull half of the chromosomes into each new daughter cell. Colchicine disrupts their formation, meaning one cell gets a heavy load of genetic material.

In plant biology that can be a good thing.  Plants with extra sets of chromosomes oftentimes have bigger fruits and flowers, and other production traits. Modern strawberry has four sets, banana three, sugar cane six. No big deal.

But in animal biology there are other applications.  Some of the first where in cancer chemotherapy. Clearly colchicine stops cell division in vitro, so perhaps it would hinder growth of rapidly dividing tumor cells. There is some in vivo evidence of this, mostly from animal models.

There is a lot of literature on colchicine, with mixed results from clinical application. One study showed a significant decrease in "all cancers" in male, Taiwanese patients using colchicine to treat gout (Kuo et al., 2015).

Why gout?  Gout, arthritis, pericarditis and other inflammatory disorders rely on polymerization of the same microtubules, the tiny intracellular cables that help cells divide. Rearrangements of this cytoskeleton are hallmarks of inflammation.

Inflammation is also an aspect of COVID19's effects, so testing a therapeutic application was a reasonable hypothesis.

The results were quite positive, suggesting fewer hospitalizations, decreased need for a ventilator, and less chance of dying from the infection.

The information did not come from a peer-reviewed paper or even a preprint.  It was a press release, and now many in the public are poking their health care providers for a dose of the miracle stuff (some hoping to pick some up on the way to the anti-vaccine rally).

It puts physicians in a bad place.

"This major scientific discovery makes colchicine the world’s first oral drug that could be used to treat non-hospitalized patients with COVID19."

The problem comes from the fact that we do not know why the experiments were terminated early, mostly likely because they met a statistical endpoint.   They didn't discuss adverse effects (which are an issue with colchicine, as the digestive epithelium is affected leading to diarrhea, etc.), confidence intervals, and the results from PCR positives versus others.

In other words, while results may be encouraging, there is not enough here to make an informed clinical recommendation.

Most physicians understand the side effects and should be hesitant to prescribe based on a press release.

On the other hand, this is all patients need to know it works.

And we have now created the conspiracy vortex.  Physicians make a good decision, patients make a bad one, and the inability to get the drug/poison is viewed as the dirty work of Big Pharma and Bill Gates.

Like hydroxyquinoline and ivermectin before it, there are legitimate applications for the drug, albeit with scant compelling application in treatment of COVID19.

Unlike those other drugs, colchicine can be a deadly poison at relatively low doses.

Just like before, a press release that jumps the gun causes more problems for physicians, more confusion for the public, and a fertile ground for conspiratorial claims-- especially if the results fail to reproduce in other trials or deleterious side effects are noted.

In a recent online event, a graphic was posted to introduce the speakers of a COVID19 vaccine panel.

In the first 30 seconds a remotely-controlled cursor festooned the graphic with swastikas and grade-school-quality penis line art. The audio belched forth misogynist filth and racial epithets. The screen was commandeered with a pornographic video. A thought bubble over one the seminar’s presenters was stating, “I hate n — — rs.” 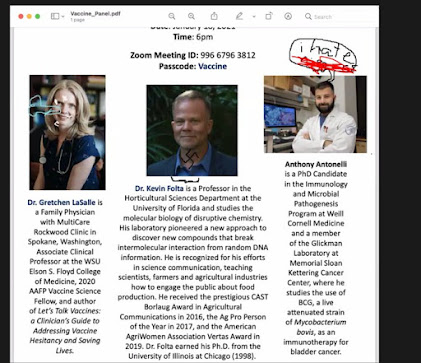 Red ink is mine. Leaving the words is just so much more visceral, but I can’t do it

Be disgusted. Understand the climate of thoughtful pandemic science communication in the Zoom Era.

The presentation was arranged by Dr. Miriam Fein from the Science Advocacy of Long Island (SALI). I was one of the speakers. All of us volunteered our time in the interest in promoting better public health, and pushing back against copious disinformation around SARS-CoV2 and its impending vaccinations.

The audience was good, over 50 at the start. Dr. Fein moved quickly and attempted to somehow mute the invading channel, but we had a strange glitch where nobody was the host, suggesting that the disruptive idiot somehow had control of the meeting.

Eventually she announced to check the SALI website for more information of where we would reconvene there. Five minutes later we were back online with a secure channel.

But with only 20-some participants.

The audience for free webinar about the current health crisis shrunk by more than half because of an invasion so vile that those interested in the science did not want to risk returning. Some attendees were clearly younger, perhaps in high school. I could understand a parent’s trepidation with the threat of gutter opposition to science communication.

The event was originally advertised far and wide through social media and we fully anticipated that there would likely be disruption. Questions for the panel submitted ahead of time also suggested a conspiratorial, non-scientific sentiment would be present.

That’s fine. I’ll take them on any day. Science ju-jitsu uses the opponent’s momentum against them, and I’m wearing a science black belt. We change hearts and minds best when dissenting opinions are engaged with grace.

That is why the disruption was so offensive. It was not about providing thoughtful opposition. It was about ensuring the event did not happen, that conscientious viewers would not enjoy access to the best scientific information.

It was about separating ideas from those that wanted them. Silencing science.

It was not about thoughtful debate, it was about deliberate disruption to interrupt information flow. Welcome to another reminder of our lives in the current hot climate.

How to fix it? We can lose a battle and win the war. Take this opportunity to forge your disgust into a new commitment to translate the science of the pandemic. Engage. Share information. Help others talk to family, friends, and other dissenters.

I apologize to all of those that had to endure that painful minute.