The Power of a Conversation

I grew up in Chicago in the 1970's, and even in a massive city we had our choice of just a few major media stations.   WGN was a staple on television and radio.

I used to get up long before the sun and there was nothing on television except for the Farm Report.  Orion Samuelson and Max Armstrong were familiar figures on radio and TV.  I'd listen to or watch them daily, even though I had no connection to farming.  I was a kid, and it was something live and local.

Years later I run into Max at national conferences and I always appreciate his stories.  Today at the Independent Professional Seed Association in Indian Wells, CA, he told a great story I have to share. 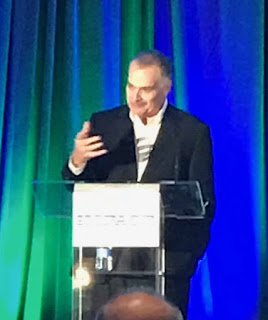 Max Armstrong shares an amazing story about the power of personal connections in telling the story of agriculture.


He was uber-ing from the airport to the hotel.  He and the driver carried on a conversation, and the driver mentioned that he had already driven someone to the same hotel earlier in the day.  He told Max that there was a farming conference happening at the hotel.

"You don't say," Max said, pretending not to know anything about it.

The driver then went on to talk about farming technology, the importance of farming to the economy, and the challenges faced by farmers to continue providing the safest food supply in human history.

The punchline?  Someone else at the conference took the time to share the story of agriculture's relevance with an Uber driver.  That story made an impression and then was shared further.

Max's story shows the power of sharing the stories of agriculture, and informing others about the benefits and challenges.  While ag producers and industry professionals perhaps don't think that their stories are compelling because they see it every day, the public-- from the foodie to the Uber driver-- want to know more, and are willing to propagate our stories.

Share your stories.  Share the excitement of new technology, and how genetics, computers and hard work ensure sustainable access to safe and affordable food, thanks to farmers.
at January 09, 2019

Welcome to 2019, and one thing that remains constant is that scientists engaging the public will continue to be targeted for harassment and attempted reputation harm.

This is published by the Center for Media and Democracy.  Sadly, such pages actually threaten democracy by providing a forum for false information that makes evidence-based decisions in policy issues more challenging.  It also is a gross distortion of freedom of speech, using words maliciously with intent to harm.

Click on the panels below to enlarge them and read my comments. 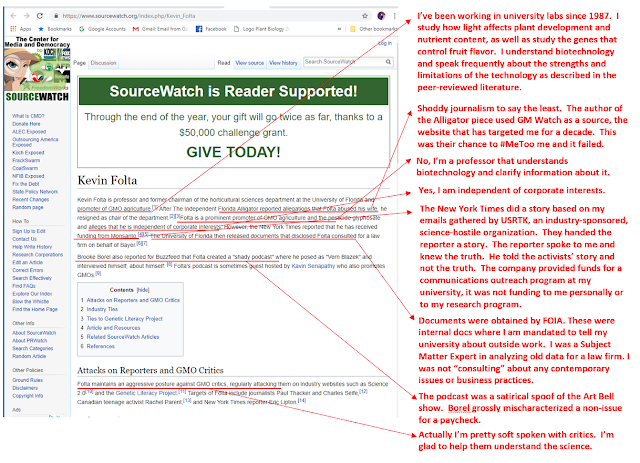 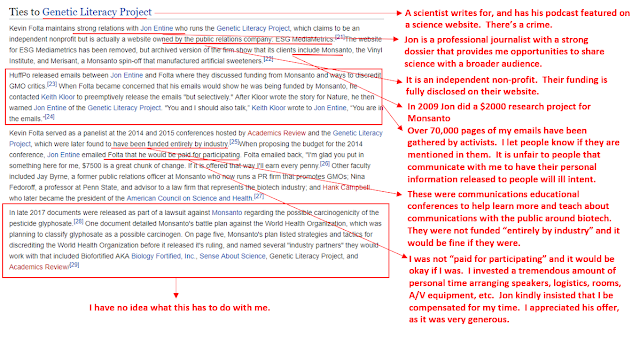 At first blush I find it bothersome to have this kind of stuff on the web where anyone can find it and develop opinions about me and my work.  But the good news is that I'm just going to have to dial it up, do more good work, and bury this kind of trash under a pile of good science and public outreach.
at January 03, 2019