I was talking to a friend this morning.  She speaks to the vastness of space and our insignificant position relative to the universe and everything.  I thought of the Sagan's "pale blue dot". 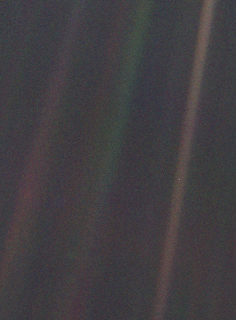 The tiny blue dot in the center of the bright band on the right is Earth. You ain't so cool.
The picture was taken from the Voyager spacecraft as it left our solar system in 1990.  Scientists turned the camera back toward the sun and captured an image.  The image shows our planet, our home, the place where everyone that every human that has ever lived, modestly presented as a dim tiny fleck- a pale blue dot.  This single pixel shows our position we were all there in that photo, all of us captured on that single spot of light.

It is humbling and maybe tragic, as it shows how minor we are in the true grand scale.