Critics of SARS-CoV2 research decry the use of the gain-of-function experiments used to study viruses. Such experiments are designed to test how changes in DNA sequence relate to enhanced activity of a gene product on biology, or in this case, the function of a virus. Mutation of viral DNA may lead to enhanced transmissibility, infectivity, pathogenesis, or lethality, among other effects.

That is exactly why researchers perform gain-of-function experiments in the safety of a laboratory setting.  By understanding the biology in controlled circumstances scientists can better prepare to address the virus if it naturally becomes problematic in a population.

Yet critics of gain-of-function research say it is dangerous and unnecessary.

And the same critics are also the least likely to be vaccinated.

The unvaccinated say they don’t want to be part of an experiment.

By failing to be vaccinated, they have become an experiment.

This is the profound irony. Those that refuse vaccination are the most likely to sequester in small towns, churches and political rallies. They participate in work and social functions as though the virus is not a threat. Few masks, little distance, limited isolation, life as usual. They are a gain-of- function experiment, a spawning ground to test effects of new mutations.

When ignorance goes viral, the virus goes to the ignorant.

In the lab, prescribed changes may be made in DNA precisely, and the effects can be followed in laboratory animals.

Outside the lab, the virus replicates furiously in the body.  The body produces hundreds of billions of viral particles. Each round of replication is slightly imprecise, potentially introducing random errors into the newly-produced virus. Most mutations have no effect. Others negatively affect the virus, its transmissibility, infectivity, or pathogenesis.  We don't ever see these viruses in populations because they are a biological dead end.

But occasionally a mutation arises that bestows gain-of-function. When that newly-enabled virus escapes containment in that first breath, it may gain a foothold in a population, and become a new "variant of concern".

We are learning about enhanced viral function by studying the new variants now circulating in populations.

There is no question that vaccine denial follows political and regional trends. These areas are the breeding grounds for new variants. It is the most extensive viral gain-of-function experiment ever performed.

And remarkably people are willing to participate.

Dr. Stephanie Seneff has polluted the scientific conversation about the health effects of the herbicide glyphosate for over a decade.  This latest volley is the waving tip of a white flag, as time is not supporting her alarmist claims.

She does not run a research program on glyphosate or its effects on humans.  What she does do is use the title of "Senior Research Scientist at MIT" as cred to be able to push underpowered hypotheses that are framed as legitimate empirical research.

The outcome is a slate of less-than-scholarly review articles, almost invariably in low-impact journals, that decry the dangers of herbicides and vaccines. They are give some credibility because of her title, and at least one journal has published a warning label that the work is suspect.

How are the papers constructed?  In short, they are sculpted narratives of cherry picked data and pushing correlations as causation.  These are crafted into what are best hypotheses not supported by the preponderance of he evidence.

Like this one in the journal Entropy. The unknowing actually think it is scholarly research. The journal even notes the authors' bias in not presenting the breadth of the research (a.k.a. 'Cherry Picking').

One famous one was the claim that due to glyphosate use, half of all children would be autistic by 2025.  This is conclusion is an extrapolation of trends of glyphosate use and autism prevalence, as she described in this logical-fallacy strewn wreck of a paper. 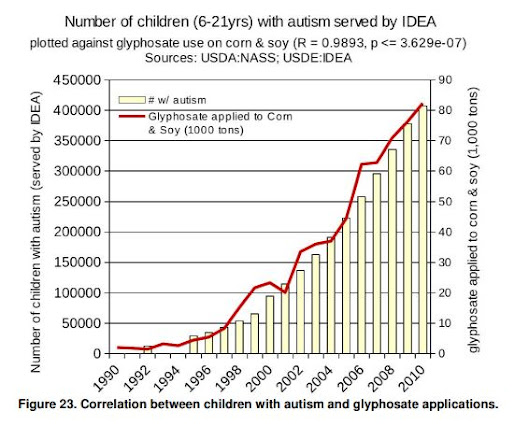 To some great thinkers correlation and causality are one in the same.

Apparently now that landmark 50% rate appears to have shifted, apparently to 2032.  We're not using less glyphosate, so I wonder why autism rates now won't hit half of kids until seven years later? 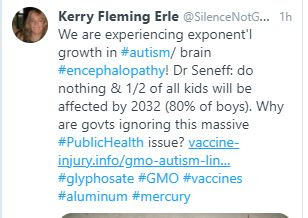 Twitter links to the claims that glyphosate-induced autism is on the rise, just not as fast as predicted. The link takes you to an anti-vaccine site for the documentary Vaxxed II.
The real reason the claim was pushed back was much more practical. 2025 is the year after the year after the year after next year.  If you're going to revise your bogus claim you have to do it early.
The more realistic answer is that physicians have changed the criteria for autism and surveillance has greatly improved.  Even minor anti-social behaviors can place a child on the autism spectrum, which is excellent because early therapy and intervention can have great effects.
My point here is to remind you of the predictions that were made and never seem to come true, and remember the people that make them. They are held up as heroes in some conspiracy communities, and their errant opinions affect how some perceive science and technology.
at July 11, 2021