Film Review: The Need to Grow

The recurring ads on Facebook pulled at me to watch The Need to Grow, a documentary film about food and farming.  As someone connected with these areas professionally and personally, I thought it would be worth a watch.  Here is a review.

First the good things.  The film is nicely shot and well written.  The majority of the work builds on themes such as nutritious diets healthy soils, and efficient energy. Those are the central underlying values of the film, and ones that I wholly endorse.

However, where the film falls apart is in its approaches to achieve those end points.  Two of the "experts" recruited for the film are none other than Jeffrey Smith and Vandana Shiva, two people with little training in science or farming (and no, Vandana Shiva is not a physicist as the film claims).

The narrator is actress Rosario Dawson, who early in the film makes the proclamation, "Agriculture is the most destructive human activity on the planet."

It is clear where this is going. While agriculture can always do better, I'm not sure it rises to the level of "most destructive" human activities, especially when it quells famine, war, and malnutrition, which are real tragedies of the human existence.

There also are statements about how "food has no nutrition".

The film follows three interwoven stories.  All are tales of the well-meaning good guys being struck down by the stark fist of The Man, Big Ag, Big Energy, and Big Cookie.  It is the unappealing story of victims of the machine, yet all folks that took a stand on flimsy foundations.

The first is that of Alicia Serratos and her mother.  Back in 2014 Alicia took on the mantle of collecting signatures to petition that the Girl Scouts of America make "GMO free cookies".  The film shows that she collects a lot of signatures, then she goes to New York City and GSA headquarters only to be snubbed by leadership and sent on her way.

During the cries to remove "GMOs" from the cookies the GSA was very clear that they were going to follow the science and not the demands of a child. That was the correct position to take.

Similarly, at the time I wrote a number of blogs on her campaign.  I was especially concerned that young women were being taught that (their parents') beliefs and bad science was superior to STEM-based conclusions.  My point was that young women like Alicia needed to carefully contrast their passions against the evidence science gives us.

I got an angry letter from her mother for that.

The second part is about Michael Smith, a software engineer and inventor that used a Montana Department of Environmental Quality grant to build a system to turn wood waste into energy, and then recapture the carbon dioxide with algae. All could then be could be used to generate electricity from methane.  His company was Algae Aqua Culture Technology (AACT), and it was essentially a demonstration site to show that wood waste could be converted to useful products for energy and farming.

The crisis moment came when the steel and glass structure full of water burnt to the ground.  There was a curious lack of explanation for why or how a glass and metal structure would melt so completely, but plenty of those interviewed implied it was retribution for AACT creating a solution to end the stranglehold of Big Energy.

Strange, while you can find documentation of the fire at AACT, there is no mention of how the fire was caused, even to this day.  There was no mention of arson or any investigation to the cause. 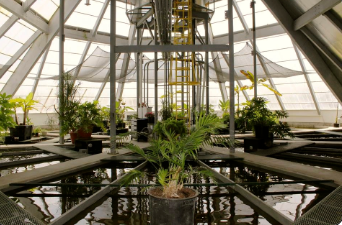 A photo of the water, metal and concrete that burned to the ground in the documentary The Need to Grow.

The final story was about Alegria Farms, a 1.4 acre plot that implemented hydroponic and other production methods to grow local produce.  The story goes that the area was surrounded by development and was shut down by the county to turn it into something gross like a subdivision or something.

What they didn't tell you was that this was a demonstration farm funded by local interests to show how urban farming could be taken to another level-- super cool.  I love this kind of thing and fully endorse making more of it.  Research in these areas and demonstration farms are needed to kindle the interest in food production with city folk.

But the story line made this look like one man's life's work being crushed by Big Government, when it was really just a government finding (what they deem) better use for the property. It is Orange County, CA after all, and demonstration farms are probably pretty low on the priority list for land allocation.

In conclusion, the movie has a very positive underlying message-- how do we innovate and channel our passions into feeding more people more healthy food.  That's great.

The problem is that instead of showing the innovations and how they create durable changes in community food supply, the heroes turn into victims of the villains, their missions thwarted because of of Big Evil _____.  That kind of conspiratorial thinking is not only boring, it is the kind of thing that only erodes the trust in science and in modern farming.  That's a dangerous place to go, and only increases disdain against conventional farming.

We know that conventional farming can do better and it has.  No-till and conservation tilling practices are common, there is a new emphasis on  crop rotations, and new genetics (including genetic engineering). These strategies are making large-acre strategies more sustainable. Variable rate fertilizer applications have cut application and runoff (and costs) based on aerial image data. Fungicides and antimicrobials have been cut due to integration with weather prediction data.  New chemistries, sensors, robots, and other technologies can help farmers do more with less.

The way to satisfy the need to grow is not to trash what is here.  It is to use that as a starting point and continue to innovate. That's what we do in medicine. We don't go back to leeches and blood letting because we didn't have a vaccine ready for a global epidemic. Well, some people do, and that may include Dawson and the folks in the film.  The rest of us rely on the the best technology science can bring to address the questions as they arise. That may come from research in organic production, conventional methods, or even indoor plant factories.

This is the positive message of agricultural innovation.  We need documentaries that make the call to all hands on deck, feed more people better food, and show the amazing new innovations in genetics and technology that can help us achieve our sustainability milestones.