After sending a complaint to Bertolli after putting their Non-GMO Olive Oil (all olive oil is non-GMO) back on the shelf, my friends at Bertolli kindly returned a message. 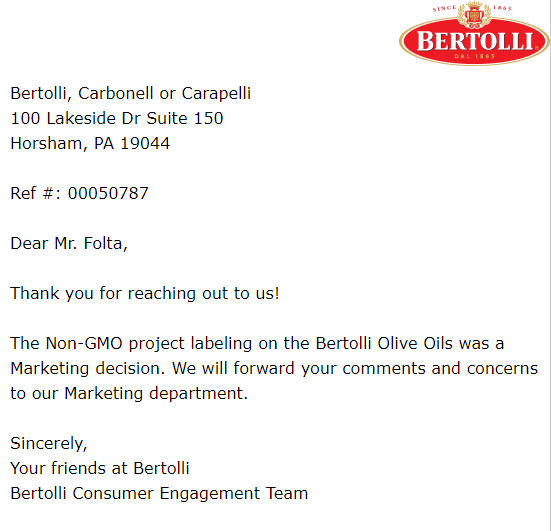 It is all a marketing decision.  It is pandering to the lowest common intellectual denominator and driving sales with fear-based advertising.

I won't be playing along.  Selling out honesty and ethics to take advantage of the chronically misinformed is not something I support, and not a company I will support with my dollars.
at October 11, 2018

Bertolli and the Non-GMO Project

I ran out of olive oil.  I buy the stuff by the gallon usually, but my local grocery store had some 500 ml bottles on sale for $9.89, but buy-one-get-one-free, so 1 liter of olive oil for about ten bucks. Not too bad.

It was Bertolli brand.  I put it in my cart and then I saw it-- the Non-GMO Project label, the label that certified that no GMO olives were used in the preparation of the oil.  They are telling the truth because there are no genetically engineered olives, so all olive oil is "non-GMO".

So I put back the Bertolli product and instead got a liter of Colavita olive oil for about forty cents more. Neither features the butterfly of credulity. 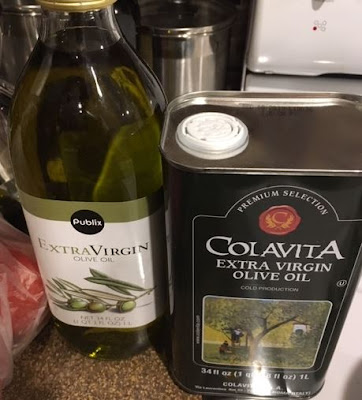 Instead of a product that sports fear-based marketing to science-hostile interests, I bought a liter of general purpose olive oil for cooking and a liter of a higher quality oil for special applications.

It gets much worse.  The Bertolli website features six products under "olive oils". 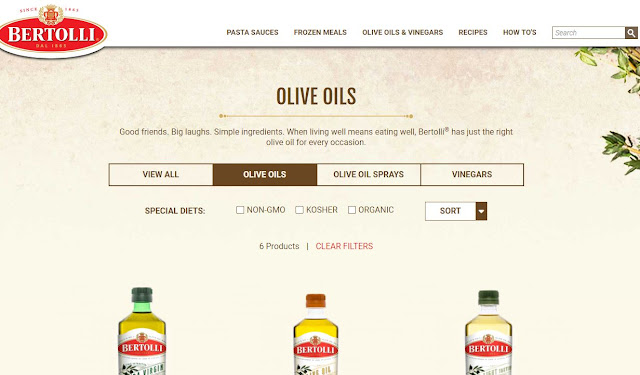 But wait!  Some of these must contain oil from genetically engineered olives.  I never knew such things existed (because they don't) but you can filter products by "Non-GMO" options. 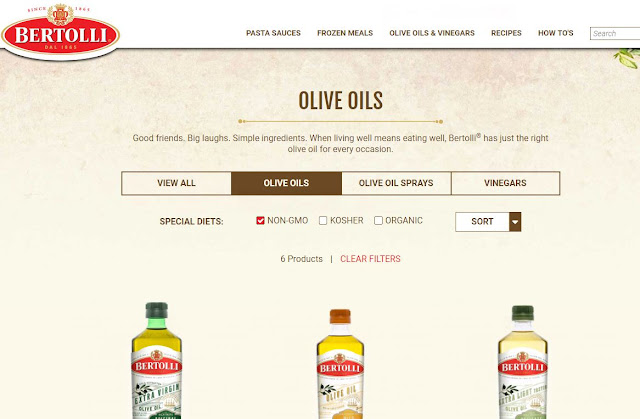 And how many dropped out of the search?   ZERO!  All olive oil is comes from non-genetically-engineered olives, every last drop.  So the filter removes nothing.

It is a useless bauble, a deliberate means to misinform the consumer that simply has concerns about their food. Bertolli plays right into the deception of food misinformation.

Now I can add Bertolli to my list of companies to not support.  I will not let my dollars be used to fund an organization that misinforms the public, fights against farmer choice, and harms technology from reaching those in food insecure regions of the world where it is desperately needed.

Avoid the label.  Don't buy the products.  Remember who exploited fear-based marketing long after this dangerous trend has passed.
at October 10, 2018

In a campaign that The Food Babe would be proud of, a group of attorneys have filed a class action lawsuit against LaCroix.  The claim is that the ingredients are not natural and that they are components of roach killer.

It is the 2018 equivalent to Vani Hari's misrepresentation that Subway's bread was made up of yoga mat chemicals. Remember that one?  Ah, simpler times.

The ever-credulous media was quick to amplify the story. 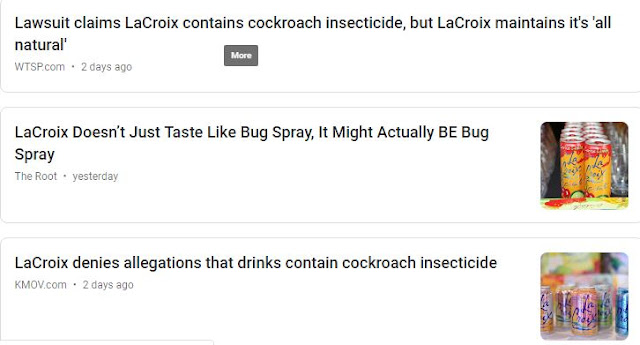 Without any critical analysis, the internet amplifies the sensational report.

The attorneys claim that LaCroix contains linalool and limonene, two components of "cockroach insecticide".   It does, and it is.

But was is linalool?   It sounds like a medical tool on the Three Stooges, but it really is the characteristic flavor of Froot Loops cereal.  It is a naturally-occurring volatile compound in fruits that imparts a fruity, floral note in fruit aroma.

What is Limonene?   It is abundant in citrus peel and is a component of citrus aroma.

As for insecticidal properties?   Certain aromatics are known to be insect repellents.  Others bother birds.  My lab has shown that linalool and other compounds suppress microbial growth. That does not mean that they are dangerous to consume.

But in interest of a splashy headline and a lawsuit, there are those out there that will spin the truth to serve their own ignorance and greed. Linalool and limonene are not a health risk at the levels used, they are consumed when you eat many fruits and vegetables.  It is classic chemophobia, now weaponized to make a buck from a frivolous lawsuit.
at October 07, 2018