Science sure is cool.  However, when I talk about science in public places, and that science doesn't mesh with someone's beliefs, they tend to get prickly.  I'd like to think that scholarly, evidence-based discussion can bring those in disagreement to a common ground based on data and its interpretations. However, when all they have is photoshop and time on their hands- they don't talk science- they give me a funny hat.

Better yet, they juxtapose me next to woo-woo former scientist David Suzuki.  This gem was floating around the internet, thanks to the folks over at GMO Free USA. 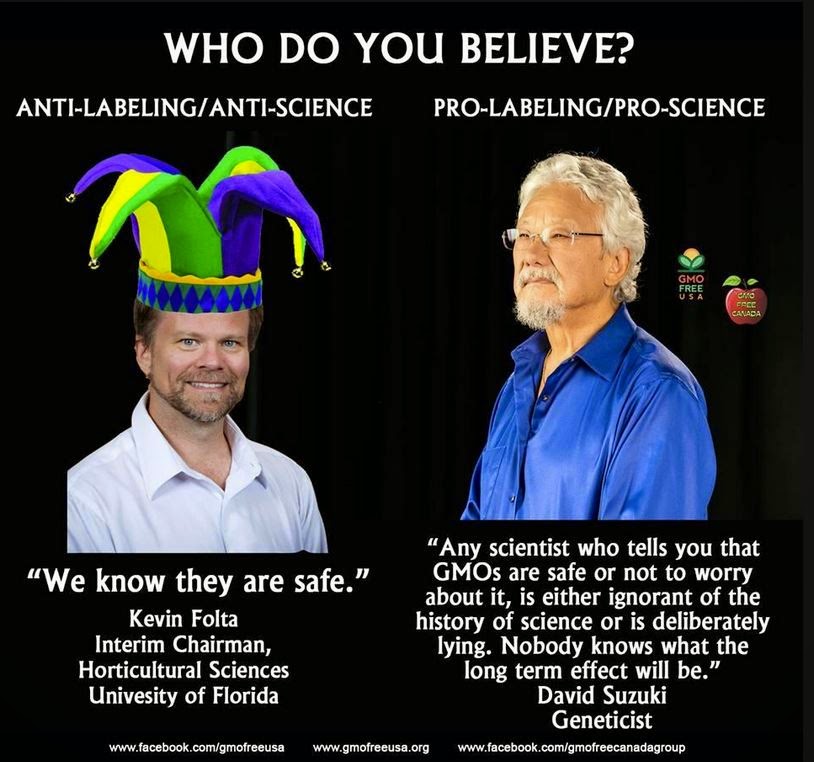 To opponents of transgenic technology, the words they agree with define their allegiance, not critical consideration of data, interpretations or scientific consensus.  And to call a publishing scientist "Anti-science" while calling Suzuki "Pro science" when he's the guy on record of being "ashamed by geneticists"...

Plus they gave me a demotion to "Interim Chairman".  Geez.  Plus they fail to realize that a guy that even is an interim chairman among high-caliber scientists in crop science might know a little more about crop biotech than a guy that published fruit fly genetics papers on  in the 1970s. No hard disrespect to Suzuki-- he wrote my favorite Genetics textbook in the 80's and clearly had a distinguished career. But his contemporary understanding of biotech crops is all ideology and not science-based. Sometimes scientists just go batty when they get old and irrelevant.

And what do the comments say?  Well there are over 700 Facebook 'shares' of this image, so lots of my stupid mug getting around.  Here are just a few comments:

And the bummer is that I'm blocked from GMO-USA, so I can't even respond.  Of course, nobody realizes that my lab's research is not funded by Monsanto, never was. In fact over the last five years our University received $21,000 total grant support to one faculty member.  That is distributed over three research projects!  Clueless.

It reminds us that they speak without evidence and are willing to fabricate information to appease each other and their common beliefs.

I don't remember when the government told us that Agent Orange was safe.  Maybe right after they told us not to drink coke and eat pop rocks at the same time.


And what's up with Suzuki?  They best video is here. Shows his surfacy treatment of the subject.

Watch at 4 minutes and listen to him make up insane junk about strawberries, Puzstai and Mick Jagger, rambling in an argument from ignorance-- and then he gets owned.  It is fun to watch him squirm, because he's their hero. To his credit, he says he's open to be convinced-- he might just see how taking such stances harm his reputation.

The bottom line is I must be doing something right.  When the GMO USA folks take the time to smear a public scientist for talking about science, you know they are on the ropes, and fight their battle using photoshop over facts.

Evil and Ignorant Comments to a Scientist Trying to Teach

On Thursday I was asked to be a guest on Russia Today's Breaking the Set with Abby Martin.  It was the usual scientist and anti-Monsanto activist, one talking from reality and evidence and the other frothing forward silly and discredited talking points. False equivalence 101.

It started to feel a bit like an ambush when the feed died.  They knew I was on until 6:25 (there was limited satellite time purchased by them) and when I dropped at 6:25 the anti-GMO activist had free run to talk about "Bt in the blood", etc.  They later apologized, said it was a mistake and read my closing statement live.

However, right after the disconnection I felt like I had been swindled. I did check in on the message boards on the corresponding YouTube site, as I could at least get the word out there.

It was a wretched hive of tweaked-out nonsense. Still is.  I tried to add to the conversation.  Here are a few choice tid-bits of comments on the corresponding You-Tube site. 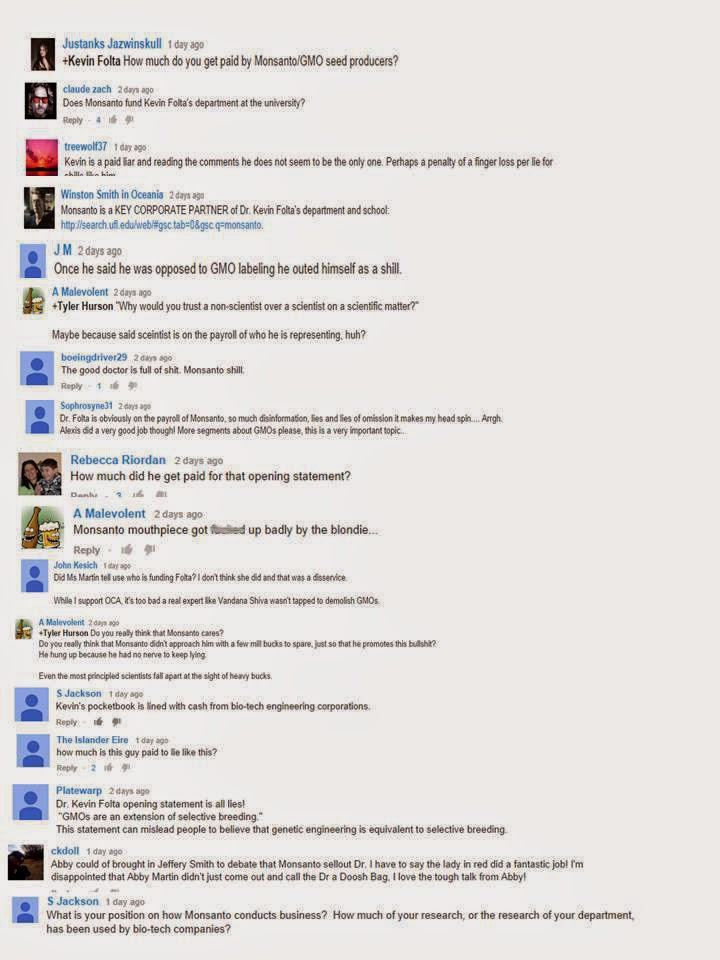 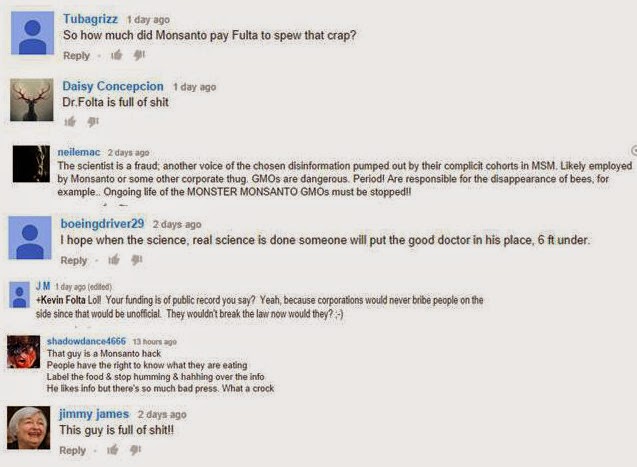 I'm not sure if I've ever seen the "shill" accusation by so many people at one time!  It is a great display of how beliefs are stated as facts with a complete absence of evidence!  It frames the entire movement in a nutshell.   And ckdoll spelled "douche" wrong, while boeingdriver29 wants me "6 feet under".

I received two nice emails about the RT appearance. Another guy put up a huge post about my dog and a video I have posted online.  I did get a rather evil email from a certainly deranged nutcase, and maybe I'll share that another time.  It was from someone making a latent threat about someone in my family, obviously figured out from checking out Facebook or something else.  Pretty gross.

Once again, it is why scientists don't engage a sector of the public that wants a right to know, but refuses to learn.  When we do, we are not met with the deserved gratitude.  We are met with false accusations, heinous insinuations, bogus corporate associations, and even hints of violence.

I guess I'm grateful to participate and install this level of dialog permanently in the public domain. My hope is that those seeking information will be motivated by what they read on these sites, as a public scientist reaching out to educate is attacked and criticized by internet sock puppets hiding behind usernames, pumping out baseless accusations.

I hope someone finds that compelling enough to reach out to us, as we try to correct a deficit in science understanding.

Guest on RT; Ambush or Error?

When the phone call came in my Administrative Assistant accepted-- my time was open at 6 pm EST to talk to Russia Today (RT).   I know Abby Martin, I've seen her shows and understand her politics, so I didn't cancel.  I did speak to the producer.  It was sold to me that I'd be a guest on the show about GMO technology. There would be another guest, but it would be a conversation.

I was scheduled for 6 pm, and RT bought 25 minutes of 'fiber time'.  This is the time on the satellite feed that they purchase to ensure a decent connection with where I was in Gainesville, FL.  I raced back from my talk at Valencia College to make it on time.  I cleaned up, fixed my tie by 5:45, and sat ready to begin at 6 pm. 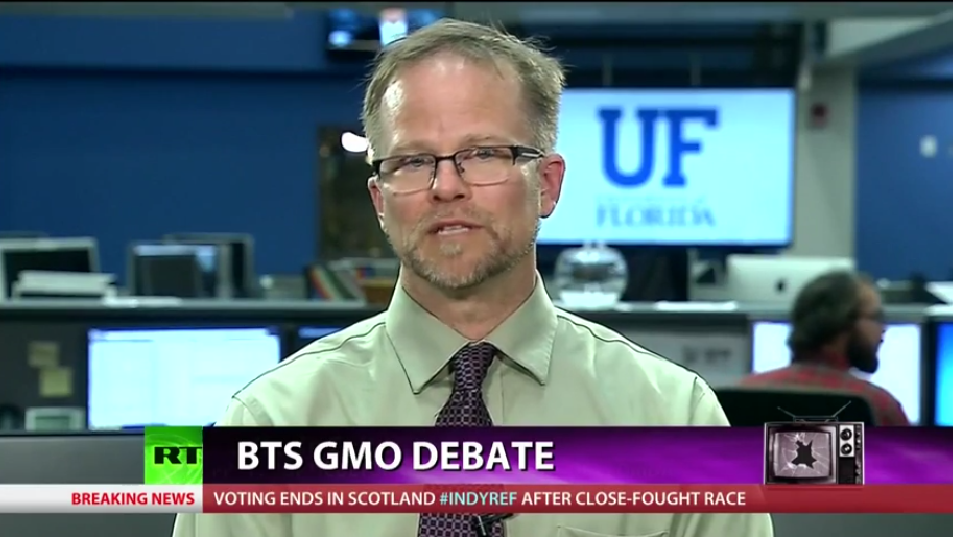 No idea this was a "debate". I guess if I knew this was they GMO Bill Nye vs Ken Hamm I would not have agreed.


At 6 pm I was ready to go.  However, there was a 10 min story on Scottish independence.  At 6:10 there was a discussion of libertarian candidate presence in the debates.

Which led to the last 10 minutes for me to discuss transgenic technology, which turns out to be a "debate" with someone from Organic Consumer's Association.

Fine with me, I have facts and evidence, I'm down for a discussion, but there's no debate.  What is there to debate?

I provide a scientific synthesis of transgenic technologies, and the woman from OCA comes out blazing with the usual nonsense.  She claims there is no FDA oversight, that Monsanto controls all seeds and tells farmers what to do, blah, blah, blah.  The discussion turns to labeling.

Right when I get my chance to refute the nonsense-- the feed dies, precisely at 6:25, right when we knew it would die.  This left five minutes for the guest to go on and on about "insecticides in blood" (the tired junk study by Aris and Leblanc refuted here), no regulation, health concerns, and every other bogus claim.

It was really disappointing.

I'm going to reach out to her and see if she's being deceptive or just does not know better.  I'll report back...

I'm not a big conspiracy guy.  However, they KNEW that they had 25 minutes, we told them that time was short, yet they moved this discussion to the back end of the report.

I"ll never go on Abby Martin again unless they do some major damage control.  It sort of seems like an ideological ambush, a planned illusion of false equivalence.  A perfect anti-GMO scam.

So far no reports to Twitter, so this thing likely died in place.  Let's hope so.

A Conference to Misinform

Colorado is trying to pass a GMO labeling law, so they'll need to bring in the slate of discredited pseudoscientists to scare the credulous.  The Seeds of Doubt Conference is being held on October 11, and features an array of proven scare mongers that sell bad science.

Renowned experts!  Wow!  I can't wait to see who those might be... 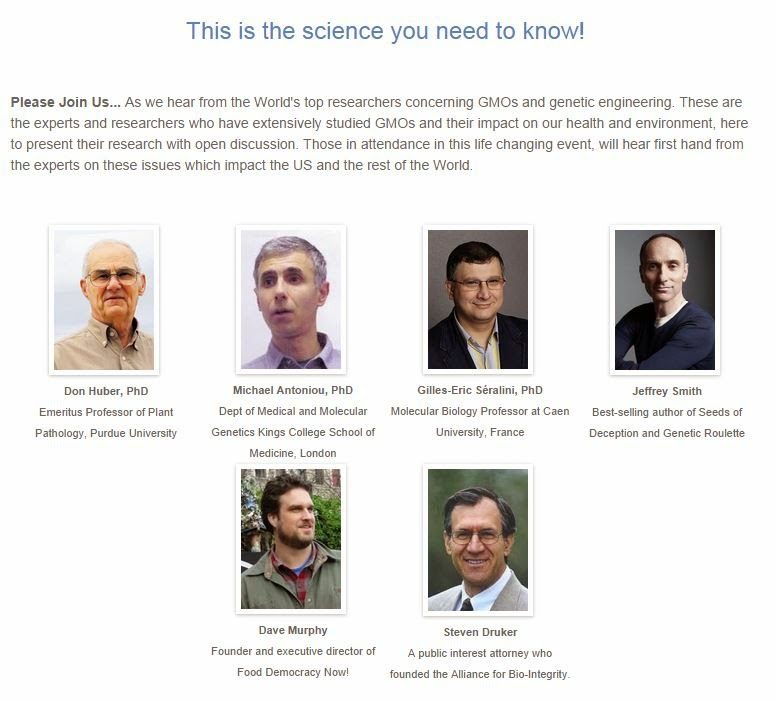 The usual suspects.  Of course, nobody invited that actually presents a viewpoint based on the peer-reviewed literature.

This is no surprise.  When a ballot initiative needs to steep a population in fear and push them to vote against science, this group will be most effective.  Huber will talk about his mystery "entity" that he's cultured since 2002 and has no idea what it is (even though anyone could figure it out in a few days).  There's author and documentarian Jeffery Smith, a guy who's empire depends on scaring audiences. Seralini is well known for data that never pan out anywhere else in the world, especially in the billions of cattle that consume 100% GMO diets.

Here's the scary part:  YOU CAN GET CONTINUING EDUCATION CREDITS! 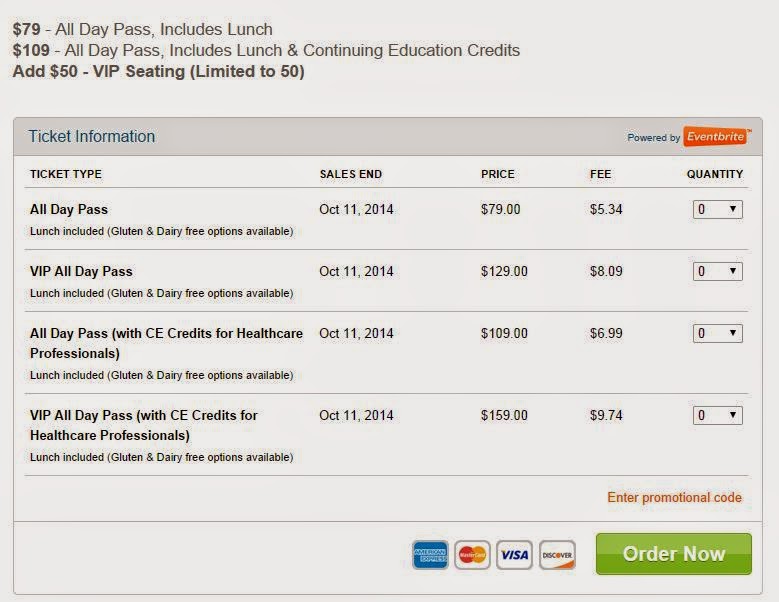 One of the operative words here is EDUCATION.  This group will misinform a public about a perfectly safe technology.  The participants are not being educated, they are being lied to by expert manipulators that push an activist agenda.

Having CE Credit for healthcare providers also provides a credibility to the event it does not deserve.

I'm thinking about hosting an event across the street, a Science Kegger.  Free!  Talk about what participants just heard and how it meshes with actual science.  I just might do it..