I was shocked, but not surprised, when a internet meme from GMO-Free USA popped up on my Facebook page: 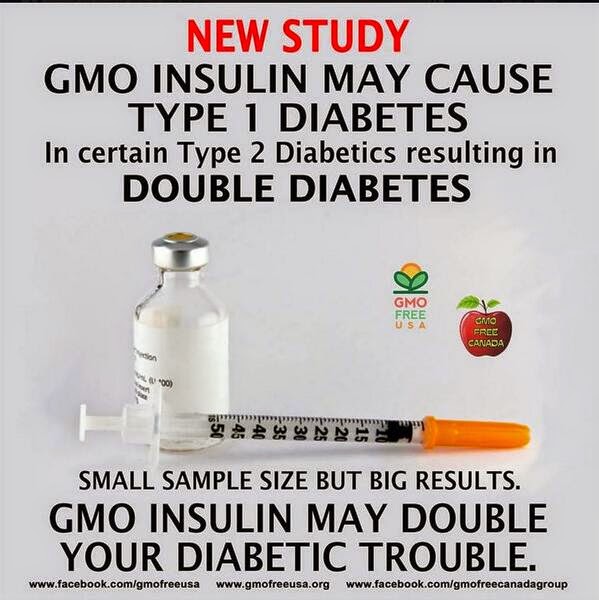 GMO Free USA (and GMO Free Canada, eh) really shows their true colors with this one.  The referenced paper has nothing to do with GMO insulin, other than saying that it is better than the stuff from animals.

The rocket surgeons over at GMO Free USA really stepped in it this time.  They are using their fear-based misinformation machine to now scare people away from life-saving insulin therapy.  We all depend on insulin, a hormone synthesized in the Pancreas, to control blood sugar levels. Elevated blood sugar can lead to a variety of metabolic disorders and long-term damage to various organs. Type II diabetics produce too much at first, leading to insulin resistance, a state where the body just does not respond to the hormone and blood sugar levels remain high. Eventually type II's do not produce enough, so they need to control blood sugar with drugs, or in some cases administer insulin injections to manage their levels.

Insulin for human use used to be purified from the pancreas of slaughtered animals.  The preparations obviously would contain other potentially reactive proteins, which presented an attractive solution for recominant DNA technology.  Recombinant insulin was first generated way back in the 1970's, and today is generated in yeast or E.coli in massive fermeneters.  The recombinant (GMO) insulin is infinitely more pure, safe and available.

So why would the bone-heads at GMO Free USA make this claim?  They are not alone- the same claim was also shown over by the guy with minimal scholarly chops, Sayer Ji.  I'm pretty sure he read the headline and didn't even read the paper (I did).  It is not the first time, as he also reported on the title of the Glyphosate in 75% of Water Samples paper that was not even out, and I got the first copy from the authors. 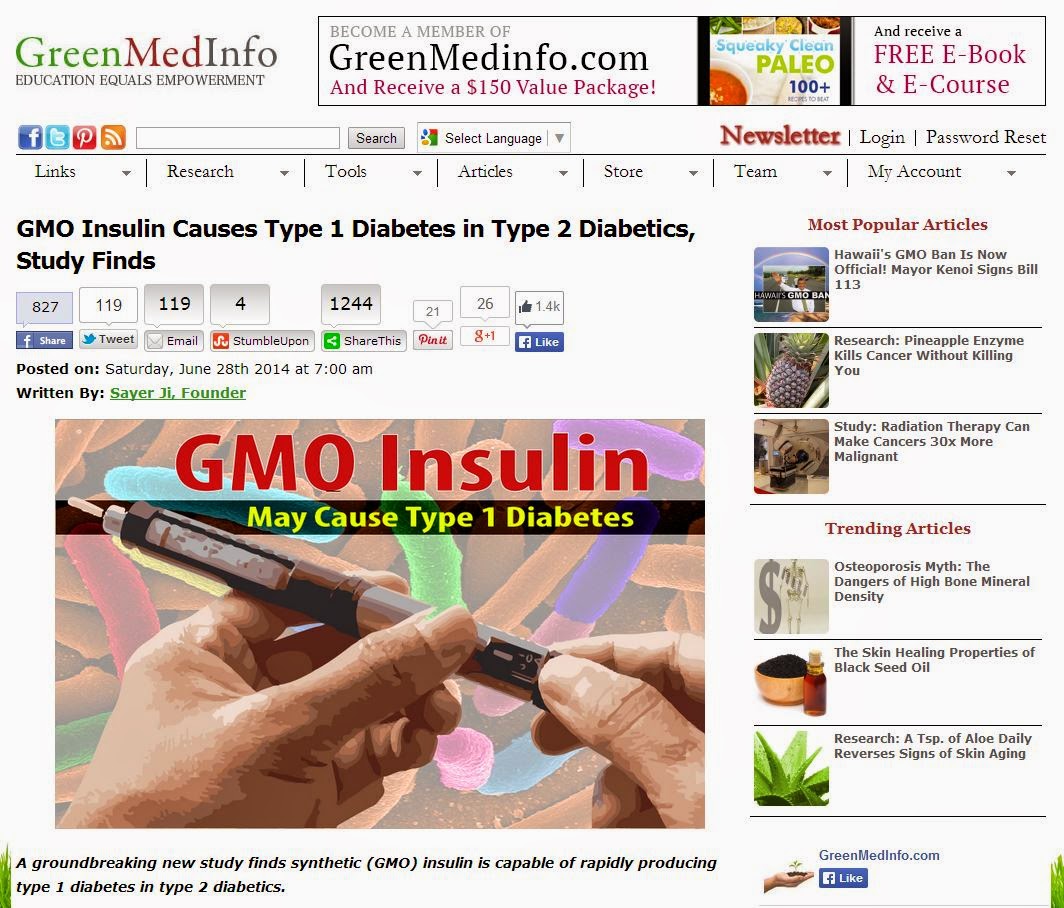 GreenMedInfo once again shows that the truth shall not stand in the way of agenda,
even if people die in the process.


They may be dead wrong on this one, but at least they are being intellectually consistent. If a bacterial gene in plants is magically dangerous, a human gene in yeast must be one of the most poisonous concoctions on earth. Of course, we all know that it is beyond perfectly safe when used correctly.

What did the paper really say?

Well, that would require reading it, which I did.  Here's the scoop. First, it does not mention "GMO Insulin" or even compare recombinant insulin to non-recombinant.

Is that what GreenMedInfo and GMO Free USA say? Absolutely not!  They should be admonished for their scare tactics.  This crosses a line.

The gist of the paper is simple. If you give insulin to someone that is not diabetic, the body reacts to the improper presence of insulin, which is a reactive hormone.  After prolonged administration of insulin symptoms of Type 1 diabetes can be observed in some genetic backgrounds.  The study by Nishida et al., 2014, in the Journal of Clinical Endocrinology and Metabolism is a short report that expands previous observations to a set of six individuals that were being tested for this response.  The interest was to determine if there was a genetic component that could be isolated in this short pilot study.

The report does state that the individuals that have a specific HLA Type (a collection of blood cell surface antigens) are more susceptible to the insulin-triggered development of Type I diabetes.  They link this to specific genetic markers that are present in Japanese populations.  It is much more complex than this, but in a nutshell...

A Dangerous and Deadly Agenda
Even Health Ranger Mike Adams is not stupid enough to touch this one. Once again, anti-GMO activists like those at GreenMedInfo and GMOFreeUSA rub their crystals and align their shakras in a message that stands to strike fear in those using safe and dependable insulin therapies.  This kind of fear mongering is just an extension of their normal routine-- condemning good technology and products to fit their own agendas, even if it causes harm or death to others in the process.

"I don't need a crystal ball; I have a crystal brain."
--Adam Carolla

Today the famous Lumpy Rat paper was published by Seralini and colleagues.  I should say RE-published because it is basically the same content published in 2012, that was later retracted from the journal.  Personally, I was glad to see him attempt to publish it again.  The literature is where the conversation should happen, and if the work is of good quality it will be reproduced and expanded upon.

If the work is of poor quality it will die a scientific dead end, cited only by the same authors in future papers with no additional progress.  Kind of like the rest of the Seralini work.

Unfortunately the general public doesn't follow the scientific conversation. People only pick the monologues they agree with, and a single flawed study from a biased lab carries as much weight (or more) than a thousand agreeing reports from 800 different groups.

It was disappointing to see that Seralini's group didn't even try to fix the obvious and egregious errors and omissions.  They even took on a snarky commentary in their Competing Interests section, stating,

"The author(s) declare that they have no competing interests, and that, in contrast with regulatory assessments for GMOs and pesticides, they are independent from companies developing these products."

... which is amazingly unprofessional, off base and not scientific.  It is a political statement.  The journal and the editors should be ashamed.

"It is conceivable that the data may find publication in a smaller low-impact title, like Carman's article in the Journal of Organic Systems, an apparently online only journal with no impact factor and limited editorial rigor.  The credulous anti-GMs don't understand science, let alone what the quality of the venue means."

Some may consider this prophetic, but it is easy to see the future when the future is painfully obvious.  Seralini appears to have quite an ego to sustain, and the retraction from an okay journal must have hit pretty hard.  It was almost certain that he'd attempt to republish the work-- but it isn't going to a decent journal.  Today it came out in Environmental Sciences Europe, a journal with a less-than-rigorous grasp on reality, a clear anti-biotech slant, and the journal that has published such duds as Benbrook's famous paper on increasing pesticide use that used interpolated and extrapolated data (because actual numbers didn't exist).

It boils down to this-- if these data were significant, if the experiments were good, and the interpretations sound, this would not be buried in the depths of a crappy journal.  If there was hard evidence that our food supply truly caused tumors, it would be on the New England Journal of Medicine, Science, Nature, or maybe Cell if he wanted to go slumming.  But it's not there.  It is in a tiny, obscure journal that has quite a visible agenda, and that's the only thing visible about it.

And that's where it belongs.  Let him have his day in the sun.  History will not remember him for his science. It will remember him as a disgraceful hack that let personal agenda affect adoption of safe scientific technology.  He'll be the guy that fooled millions with low-quality data.

It is very sad, because I'd rather be writing blogs about exciting science and new findings.  Instead we're back to this nonsense.  Luckily, it will slowly disappear into time, like Puzstai's lectins, Huber's mystery organism, and the rest of the alarmist junk never published or never reproduced.

I'm a huge Sagan fan, and even today I am surprised at how well his words and the 70's series resonate gloriously.  But WTF is with the Gold Record on Voyager?

The records were constructed of copper with a gold plating and contain Sounds of Earth.  They were placed on both Voyager spacecraft launched in 1977 and now are somewhere out past Pluto.  Sagan noted, "The spacecraft will be encountered and the record played only if there are advanced space-faring civilizations in interstellar space (that have a turntable)." 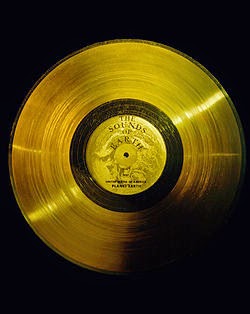 Shot into space, any extraterrestrial can enjoy "Sounds of Earth".
If they have a good thrift shop they might find a way to play the damn thing.


Of course, back in the 70's we were pretty sure that the LP was here to stay.  I remember thinking they should have shot the KISS Alive II double album into space too. The problem of launching an LP into space is that the receiving party has to figure how to use it.  If such a thing were to land from space in some random locale in the USA, the finder would either grill it, rape it or pawn it. Unfortunately the utility of a 1970's style LP record is highly dependent on the sophistication of the receiver.
On our next space probe we should include a turntable, one of those cool ones with that arm that drops a stack of records one-by-one.  Include that weird plastic swastika-thingy that you had to use to play 45's in case they find one on another space probe that liked a few Sounds of Earth but didn't want to commit to the whole album. This is a great idea for a Kickstarter campaign.

The B side is the lousy sounds of earth, like the kid screaming behind you in the airplane, that clicky noise your car makes when you turn the key and the battery is dead, and the noise the dental drill makes when it really starts to dig in.
We also need to include a dime for them to put on the needle in case it skips. Nothing worse than the Sounds of Earth with an annoying "ka-thunk" every revolution.
The whole thing is kind of charming in that it was the best we had at the time, and kinda cute that we'd see the LP record as a durable technology that might transcend the ages. It was gone in a decade. It is a reminder of how far we have come in a short time, and a prelude to how exciting our future must be.