Demanding a Right to Know

In discussions around biotechnology and food labeling there have been three recent cases where people have demanded a right to know what's in their food, but then declined a kind offer to learn when I actually offered to help them.  The right to know is an empty mantra, three words that sound like they are pursuing freedom and information.  However, at their root there is no desire to know-- just a desire to believe.

Here I'll present Case 1.  Hofstra Debate Follow Up- The debate at Hofstra was quite one sided from my perspective. One side was about fear, Gish gallops and bad activist information, the other side was tethered with science. You can guess the side I was on.  One of the debaters was Bhavani Jaroff, a local chef, radio personality and food activist.  Her debate style was to discuss the most shocking activist statements, parroting garbage science and bad conclusions, following the party line with great precision. She stood firmly on Seralini's rat paper being retracted because of Monsanto, stood by the veracity of the data, and also used the widely debunked Aris and Leblanc "Bt in the umbilical cords and pregnant women" shock language.

I do appreciate Bhavani. While I found her critical evaluation of the literature as empty as the rest of the anti-GM movement's, I do like what she's all about at the core-- teaching people to eat better food and educating them about where food comes from.  That's something we agree on 100%.  The problem is that she's sold out to the vilification of biotechnology and is convinced that it is evil poison.

Plus, I had a great time talking to her before the event and at dinner afterwards.  She's obviously bright, but simply is a victim of cultural cognition-- in this case, if I'm going to believe that eating healthy is important, then I have to be opposed to biotechnology, no matter what the scientific evidence says.

During the debate there was a point where one side gets to ask questions to the other.  She held up Seralini and Aris and Leblanc as evidence to support her position. I asked her two questions, both about the papers, their data, methods and interpretations.  She had no clue, and obviously had not read the papers she presented as evidence, or at least did not evaluate the statistics and controls with any scientific resolution.

I felt pretty bad making her feel like a deer in the headlights with hard science questions, but if you're going to use that trash as evidence, then you have to be able to defend your position.  I would never have been so pointy about it at a dinner conversation, but this was a debate where hearts and minds could be swayed, so I was compelled to expose the empty analysis of an ardent anti-GM local hero.

Afterwards I did follow up with her with a kind email.  Certainly I respected so much about what she (here it comes) brought to the table. Is she just missing key information and want to know, or is she subscribing to and ideology with all of its scientifically bankrupt claims?

She certainly is intelligent enough to confront science if it is offered, and I do think she'll flip like Lynas in a heartbeat once brought to learn the evidence. But it is not going to be that simple.

I post the offer letter here, sorry for the small type, but I summarize below. 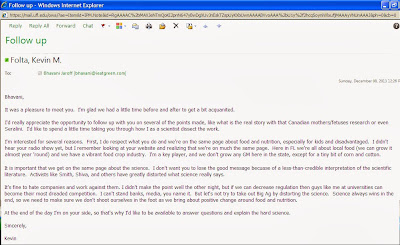 A kind offer to explain the science, and a reminder that Ms. Jaroff and I were really on the same side of a very important issue- food and nutrition.

I offered to explain the science and walk her through the papers that were the foundation of the evidence in her presentation.  My offer was sincere.  From the little bit I knew about Bhavani I completely anticipated resounding cooperation, that she'd be thrilled to have time to discuss how a scientist reviews literature and determines that it is flawed.

The email I got blew me away.  It started with how we'd have to "agree to disagree because I love the work of Jeffrey Smith and Vandana Shiva".  She then noted how science is not always right and cited margarine and DDT. She also reminded me that she can't understand why someone would want to block another's right to know.

I do not want people to have a right to know, if they opt to be deceived.  To know something wrong and promote it, is worse than knowing nothing at all.

As a scientist and humanitarian, I'll do my best to stop someone from sticking their head into a wood chipper, no matter how much it is their right to do it.

A right to know must go hand in hand with a desire to learn.  If you choose to only know the bad information, the lies and the distortions presented by Smith and Shiva, then a science-based right to know is meaningless.  If you don't want to know the science, if you want to 'agree to disagree' that science is better than activists belief, then what good is a right to know?

In other words, why do you want a right to know, when you already know everything?

In fairness, I did receive an email from Bhavani on Dec 31 or so asking about the Gene IV issue.  I was glad to explain.  It is a good point that runs contrary to her original position and certainly says that my blog here may have overstepped the situation.  I'll always be happy to explain the science going forward, and hopefully this one question will be the basis of many more.

Someone Forgot to Tell Me...

When does the crazy misinformation machine stop? 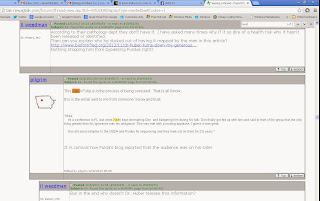 Censured? I think they have it backwards. I'm being heavily supported to moving up in our institution.

As the caption above states, I've been interviewing for the Chairman position of the Horticultural Sciences Department, 50-some faculty over locations all over our state, the #2 hort crops state in the country. I've had support throughout my department and upper administration.  In fact, I had to be convinced to do it.  I've actually been in the job for a year, but only as an interim appointment.

The post also claims that I interrupted and badgered Huber, that ultimately he told me off and the audience applauded.

Just wait. Let's let this continue to stew for a bit.  I just listened to the audio, it is amazing how I didn't interrupt.  All you hear are the unabated ramblings of Huber. Video does too, and soon we'll see what actually happened.

The take-home message is that here's a post again meant to harm reputations and draw suspicion, as well as support the claims of Huber's mystery pathogen.