On Tuesday I gave a talk at Florida State College at Jacksonville entitled "The Future of Food: Feeding More People with Less".  The talk described the challenges to modern agriculture, the need for conservation, improved production practices (including low-input/organic ag) and new genetics from breeding.  One of the key facets was transgenic technology to complement other improvements. 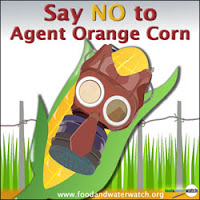 Birke Baehr is undoubtedly a brilliant kid.  At eleven years old he has interests in food and the environment, making him a clear outlier from his peers.  Birke was a speaker at TEDx Asheville. In my parsing of TEDx talks to identify anti-scientific claims, his was clearly a standout for good and sad reasons.
Again, as pointed out in previous posts, the outstanding reputation of TED talks was being hijacked by fringe interests to promote a non-scientific agenda, tarnishing the reputation of TED's credible brand.

This YouTube video named "Monsanto Corporation Gets Owned by 11 Year Old Boy" exploits the credulity of youth and the approval of a credulous audience.  Plus, he never says anything about Monsanto, just the usual anti-biotech rhetoric-- all stated as fact, without evidence.

What is wrong with his talk?  Like a few TEDx talks I am currently discussing, they are weak on evidence and their agendas are showing.  As you listen to Birke, please read along the timeline below.  Pay attention to his claims, and measure them against scientific response.


First minute-- good setup using points we all can agree on. Yes, children are vulnerable to advertising and corporations do exploit that.  By starting on ground of clear consensus he can develop an intrapersonal relationship with the listener, even one skeptical at the onset.  Smart.


At 1:05 he reveals the problem with his presentation.  He reveals the sources for his information.  He looked into modern agriculture on "the internet, in books and documentary films, and in travels with my family."  These are sources notorious for spoon-feeding a persuasive activist agenda that is not supported by the scientific consensus or peer-reviewed literature.  An 11 year old most likely does not have the critical thinking skills to synthesize this material in the context of legitimate science.


1:20  "A seed is manipulated in a laboratory to do something not intended by nature".  Okay.  Did nature intend any of the crops we eat to be grown in North America?  Did nature intend for crops to be cross bred, selected and mutated by chemical agents, acceptable by organic farming?  No on all accounts.  His determination of "natural" is arbitrary to fit the rhetoric.


1:27  "DNA of a fish, into DNA of a tomato, this is just creepy"  Maybe to him it is creepy, but a gene is a gene and such manipulations were thought to help grow tomatoes in cold, as well as give them long shelf life.  No such products are on the market, yet Birke and his supporter will tell you they are, despite no evidence.


1:40  "The food they (transgenic seeds) produce have been proven to cause cancer and other problems in laboratories".  He says this, it is not true.  He is now a puppet, lying for an agenda.  There are no peer-reviewed, published reports showing a causal link to cancer of any kind.


1:55  He talks about rats fed GMO products and liver and kidney problems.  These data come from one lab, one report (Seralini et al., 2007), where a small number of rats were fed the direct gene product doped into food. In this report, differences were observed in a subset of the animals, yet only data from the affected animals were shown. Such problems in meaningfully large studies have not been found, and experiments were not repeated. An expert panel revisited these data and published their conclusion that "analysis conducted by Séralini et al. (2007) provided no evidence to indicate that MON 863 was associated with adverse effects in the 90-day rat study."  Still, Birke makes that claim.


2:35  "Pesticides and herbicides are sprayed onto plants to kill weeds and bugs".  Yes. That is not just transgenic technology, and organic farmers use Bt too.


2:39  "Poisoning our water too".  I agree.  This is why we need more research into how to farm with less environmental impact.  Transgenics will be part of that conversation.


2:46  "Then they irradiate our food to try to make it last longer".  I could not find any information on this with regard to specific fruits or vegetables. However, it is safe and actually kills dangerous microorganisms.


3:06  The crowd goes wild when he says he wants to be an organic farmer.  That's a ballsy career choice for an eleven year old, and I hope he does it.  The crowd reaction gives you a hint of their likelihood to subscribe to a naturalist fallacy.


3:54-4:00  "We can pay the farmer or we can pay the hospital"  He makes the claim that organic food is not more expensive when compared to the medical bills you'll incur from eating the products of conventional farming.  That is a real stretch and somewhat dishonest, unless there is evidence of such costs.


More accurately, conventional diets are part of the lifestyle that allows us to live longer, requiring more health care.  We're not dropping dead from heart attacks at 40 so much these days.

Certainly I agree that food is important and diet and disease are inextricably linked. However, healthy conventional food is just as good as healthy organic food, and that's quite clear. Nothing wrong with organic food.  Nothing wrong with conventional food either.
4:28  "I believe that kids will make better choices when they know about their food and where it comes from".  Absolutely.  I agree 100% and hope that we can teach that with a fair and even scientific hand.
4:54  The Frosted Flakes box again shows the agenda.  Make good food look like poison with no evidence of it being harmful.  Frosted Flakes are not my first choice for a healthy food, but the hyperbole shown is designed to generate fear, not to educate.
5:00  A swell of applause.  The crowd bought it.

Once again, the TED name is exploited to provide an evidence-less presentation that appears to have content. Brike is a sharp kid, likable, and the perfect shill to sell an anti-scientific agenda at the expense of TED's reputation.  It is a rant against biotech and a commercial for organic farming.

My recommendation?  I'd love to see Birke keep learning about food and doing his best to be an organic farmer.  He should continue to learn and implement everything he can about low-input agriculture and how to make food more environmentally sustainable. That may include transgenic technologies and he should be open to that.

He is homeschooled. I'd like him to read "Tomorrow's Table" by Drs. Pamela Ronald and Raul Adamchak. I'm curious what he would think.


Most of all, I hope his home school emphasizes hypothesis-driven science and critical thinking. From the sound of things he's being exposed to a feelgood agenda, promoted by those that subscribe to the naturalist fallacy and/or disdain Big Ag.


It also scares me that an audience is so blinded by Birke, that they stop thinking critically, and actually reinforce what he is telling them- claims against sound science without any good evidence.