Social media can be quite a pox, but for the most part it is a great way to share good information, have a laugh, or connect with others.  The problem is that it also can be used by folks with unsavory interests as a tool for personal tear down.

The unfortunately hostile nature of social media is what turns many away from participation in important conversations. This is especially true about conversations about vaccines, climate or genetic engineering.

So how to fight back?

I used to ignore, block or delete hostile trolls.  About two years ago I realized that I could take screenshots of their hate and actually use it to curry favor with those I sought to influence. In other words, by exposing their filth, I earned trust.

It comes from a position of power. It shows that you are not going to succumb to being a victim, especially from anonymous troublemakers and slander bots.  It also suggests that the reason you are targeted is because you have something important to communicate.

Yesterday posts started showing up on Twitter.  I wrote a note to CNN and the anchor Ana Cabrerra. The featured The Food Babe Vani Hari as an expert in food safety, when she is untrained in the discipline and has a self-serving non-scientific agenda.

The tweets specifically cited the highly-visible articles from Brooke Borel (Buzzfeed) and Eric Lipton (New York Times).  Both of these were articles written specifically to target me, harm my reputation, and potentially stir physical harm by igniting the anti-science zealots that swarm to a journalistic road kill. 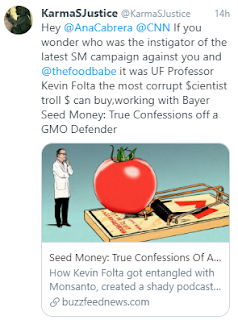 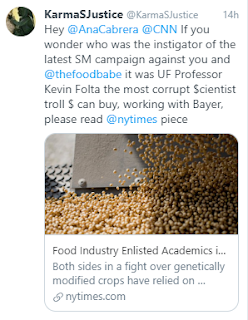 Citing articles that purposely targeted me in an effort to erode the trust I garner as an independent, academic public scientist.  These folks want me out of research, out of the classroom and out of your kids' schools. That's the price of being an agent of change.

While the convention is to block or ignore, the power move is retweet, along with a positive message.

Beat trolls with their own words. Retweet hateful messages with positive messaging.  Show who they are. It worked. They deleted their tweet (or blocked me from seeing it) right after I shared it.

This is why you need to save images of all hostile social media interactions.  Because @KarmaSJustice didn't want to stand by his/her words, I took the liberty of re-posting them. 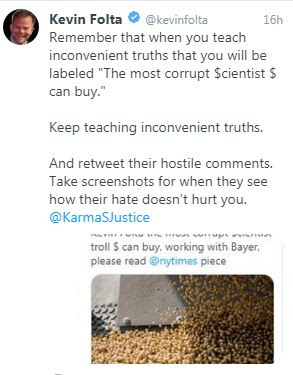 And of course, tag them in the response!

This is the contemporary method of how you deal with trolls.  Expose who they are. Use their words. Show their hate.

Most of all, show that their hate does not hurt your interest in teaching and communicating science.

Remember, most people are unsure of who to trust.  Keep a high road and point out the low road. This is how you gain influence and build more trust with those that need to hear a scientific message.