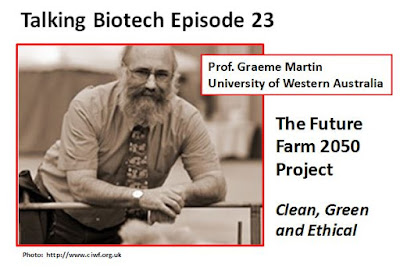 Professor Graeme Martin joins Talking Biotech Podcast to talk about the Future Farm 2050 Project. It is a series of innovative ideas to farm more sustainably, and a very interesting interview.

I've always been interested in science and communication, and as time went along always wondered how to meld the two in an interesting and entertaining way.  In fact, in my senior year in college I finished third in the nation in a forensics event-- something called After Dinner Speaking. Here you would convey a serious topic using humor as a vehicle.  I was pretty good at that.

During grad school I was paid to write for stand-up comedians and even wrote greeting cards.  I self-published funny books on pranks and pseudoscience, and wrote a lot of clever work for "fanzines", the pre-internet alternative media. My stuff flew off the racks at a local place called Quimby's Queer Book Store.  Yes, there once were stores that sold books.

As I moved through academic ranks from grad student to professor, my students' reviews always recognized how my use of humor was appropriate and helpful, and creative analogy and colorful tangents reinforced key scientific points.

In the last decade with the availability of electronic media, I was always intrigued with delivering science through clever video and other methods. The podcast medium seemed like a good one.

But I didn't want to be the "talent".  Yuck.  I like my office, my lab bench, and the occasional research talk.  To interview people seemed a little uncomfortable, maybe even arrogant. I didn't want that spotlight, but wanted to participate in a wider discussion on science.

So I created a character, modeled after the 1990's Art Bell show. When I was a grad student and postdoc I'd work every night well into the late AM, and recall the shows about UFOs, bigfoot, psychics... it was garbage, yet interesting. 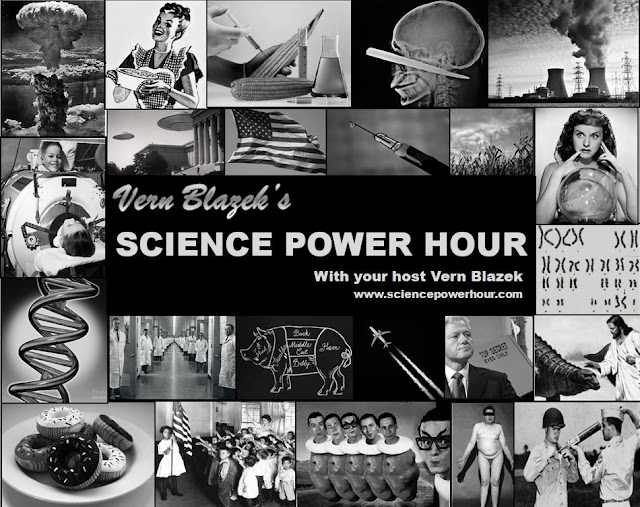 Obviously, from the cover art you can tell this is serious.

The character, radio host Vern Blazek, was modeled after Art Bell, and the thought was simple for the podcast-- instead of a real host entertaining clearly bogus science, what if a clearly bogus host spoke of legitimate science?

Art Bell's show was from the "high desert outside of Parhump, Nevada, Near Area 51."

Vern Blazek was born, from the "high desert outside of Tillamook, Oregon, near Area 52."

The Science Power Hour is about 30 minutes long, and there is no desert near Tillamook, probably one of the most waterlogged locales on the planet.

And most of all, it was done from my home, on my time, and paid for with my dollars.  It was what I did on Sunday once a month rather than cutting the grass.

But one journalist didn't get the joke, in fact, she saw Vern not as a character spawned to explore a new medium to share science and have a laugh-- she saw it as a devious plan. You can read about it over on Buzzfeed. I'm not linking it.

I actually asked her to be a guest on the Science Power Hour.  She had a book on bedbugs and that seemed right up the alley of a kooky and clearly fictitious host, and probably a fun topic to bat around.  I should say, that I always enjoyed her work very much, and followed her for a long time before meeting in person.

But instead of rolling with the joke, she was weirded out, confused, perhaps even outraged.  Heck, it spawned the Buzzfeed piece.

When she suggested the work was questionable I honestly evaluated it through her lens. I agreed that it could be considered problematic, and I took down the whole thing. Done.

In the ensuing months we spoke often.  I was glad to talk to her and try to help her understand why we do experiments, in science and in communication. Why did I push the envelope with communications?  Why did I try something weird, or different?  It didn't make sense to her.

I told her that I understood her concerns and made the correction. No problem.  But she wanted to do the piece, not just correcting the problem, but now doling out the penalty phase of public shaming.

So when it became evident that she was going to publish the story I put some of the episodes up, plus some others I had ready to go.  That's what's there today, of course with some obvious transparency.

Long story short, it still ends up a substantial piece on Buzzfeed, intertwined with the tired story of my emails and a donation from Monsanto to an outreach program that was never used. 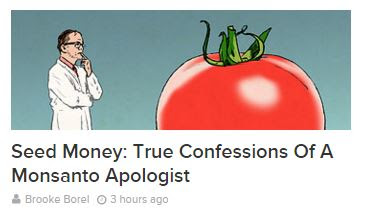 Now I've been branded as a "Monsanto Apologist", even though I've always stood up for science, and don't care one way or the other about Monsanto.  More code for clickbait hit piece on a public scientist.  (They did change the title later. Wow, maybe it is okay to change one's mind later about the appropriateness of what we do, maybe not unlike the re-adjustment of the VB podcast... Hmmm.  Irony everywhere.)

Sadly, when we interviewed together for her piece I was able to clearly answer every one of her allegations, but it didn't matter. Even in the article she makes the claim that my interactions with Monsanto began in April of 2013, which I explained over and over to her was not true. She cites an email from a guy at Monsanto. She's right, he works there. Real discussions of communication and funding outreach didn't happen for a year and three months later. Still, it was important to establish the longest timeline possible.

It was not a case of a decent scientist, who has made a career doing edgy science and outreach, pushing the edge-- to her, it was a scandal, a nitwit scientist that doesn't get it.

That's exactly what comes out in the Buzzfeed piece.

I do get some positive feedback. Some people enjoy it and think it is a good piece of work with nice guests. It has been said, like "Art Bell and Steven Colbert had a baby, only not as funny or entertaining."

As for the author, I hope that she finds a sense of humor and an appreciation that we're not all schooled journalists that play from a narrow playbook.  I can't help but think some of this is personal, something I said or something she doesn't like about me. I never got a good vibe from her, which is why I invited her to the podcast. I'm uncomfortable with not connecting to others, especially those in science journalism.

Some of us are obsessed with sharing ideas, teaching, and inspiring. And if a golden-throated parody of a UFO radio show shares a story or captivates a few minds... that's a good thing.

It will be very interesting to see how this story plays out.  I think the story in Buzzfeed will long be viewed as a personal takedown, an attempt to harm a scientist that does not share views on modern ag or some other issue.  Who knows?  I don't understand why this was necessary.

And someone on Twitter saw this flap and hit the nail on the head about innovative science communication. She said, "Everyone keeps saying that we aren't reaching beyond the choir. Somebody tries, and it's nothing but pearl clutching."

Science will tell its story, and will do it with many means, including innovative, perhaps weird, use of many types of media. That's how we'll reach more hearts and minds that didn't find the original dry science particularly compelling.

7/12/2019 EDIT --  This was a good idea and was executed well.  Unfortunately the other organizers took umbrage to my repeated demands to complete the work and dismissed me from the project.  I did initiate drafts of the manuscript back in 2016.

It is part of a much bigger falling out.  These folks also decided to use FOIA to obtain internal university documents about confidential professional witness work I was doing for a law firm on my vacation time. They broke my confidentiality, revealing information that was not supposed to be public. It jeopardized my involvement in a private dispute between two parties, as well as the progression of the arbitration. They have certainly taken every opportunity to impugn my integrity and harm my career, in this and other ways.

Please understand that if I had any pull in this situation I would do everything I could to complete the work as promised. It pains me to not deliver, but I have been dismissed from this project and have zero influence in its progression.

We want YOU to help us answer the question!

The internet is filled with claims that wild animals will not consume genetically engineered crops.  Even alleged experts like Dr. Don M. Huber claim with absolute certainty that animals "will not eat it at all" .

These kinds of claims are reinforced by rather dubious one-off demonstrations on the internet.  Like this one: 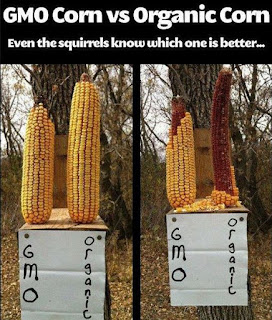 Demonstrations like this one are common on the internet, and suggest we need to do the real experiment.

Dr. Karl Haro von Mogel and I have been planning the actual test for years.  We have finally obtained 2000 lbs of corn and it will be distributed as kits at $25 each.  The fee covers the shipping costs, kit components, and cost to hire people to do the assembly.

You can join the effort here!

Hypothesis:  When given a choice, wild animals will not consume genetically engineered corn.

You can hear the whole story on the Talking Biotech Podcast.

We'll test this hypothesis with the help of 250 volunteers who will perform the test using our blinded, coded corn.  The GM corn plants were glyphosate treated and have many "stacked" traits.

Get your kit today, and any extra funding obtained will go to fund extra kits that will be distributed to schools for free. 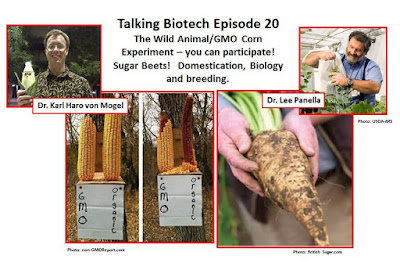 This week's Talking Biotech features interviews with Dr. Karl Haro von Mogel and our interest in finding 1250 participants to test the hypothesis that wild animals will not eat genetically engineered corn. You can contribute to the effort and/or participate here!

The second part interviews Dr. Lee Panella about sugar beet breeding.  We don't think much about sugar beets, but they are important to sugar production and bring good value to farmers.