Back before calling out disinformation was fashionable, I was busting biotech charlatans for lying about science to satisfy their personal agendas.

It was seven years ago today that Dr. Don Huber, Emeritus Professor of Purdue University, stood in front of a room of people and scared the hell out of them. I was in the room. His stream of disinformation was disgusting, deliberately and intentionally lying to an audience assembled to learn about food and new technology.

You can read about the event in detail here.

At the event he reiterated his claims of a new organism he had isolated from "GMO" crops-- a deadly "virus-like fungus" or "microfungus" that killed plants, caused disease in people and triggered spontaneous abortion in livestock.  The audience was aghast, with audible discomfort in the room. 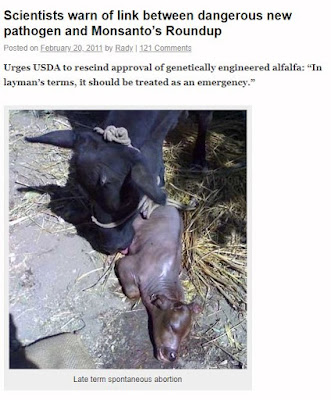 Not "scientists" but one unscrupulous scientist that intentionally fabricated a story to influence public perception and sway federal policy.

Long-story short, during the Q&A I asked him if I could obtain a sample, sequence its DNA, and reveal the nature of the organism and stop the crisis.

After a long, rambling retreat, he said that he and his team in China (yes, China) were sequencing the genome and would release the results shortly.  He refused to accept my generous offer.

This is the same deadly organism that Dr. Huber reported to US Ag Secretary Tom Vilsack.  He wrote it from his position of authority as a university professor, and noted his military service. He claimed that it was a "pathogen of high-risk status" and "should be treated as an emergency."

From Cooking Up a Story - A synopsis of the Huber letter to Vilsack
This established expert attempts to mobilize the resources of the United States of America to address a problem that only he can see, a move motivated by his anti-biotech views and a vendetta against a company.  It also was claimed to be caused by glyphosate, making it an harbinger of the future false claims made against the compound.

Seven years after I offered to help him solve this national emergency, there is still no news of progress on the deadly pathogen.

Because he made it up.  He lied to the US Ag Secretary and millions of people to scare them away from modern farm technology.

He also went after me personally, sending a brutal letter to my university, condemning my audacity to ask him questions, and explaining that I was "aggressive" and off base how I treated him.  I was nothing other than polite, as was revealed to my boss on audio recordings.

So this is personal.  I want to hold him accountable, I want the public to not forget his lies.  He intentionally provided false information to influence public perception and policy around agriculture.

While he had a solid career as a scientist, his disinformation and hostility towards the scientists that held him accountable should be the centerpiece of his legacy.

Ending COVID19 - The Decision is Ours

One message that is not being shared about COVID19- It is 100% controllable with changes in our personal behavior. A virus is just a tiny collection of infectious chemistry that only spreads when we permit it to spread. This is why testing, tracing, staying home, washing hands, controlling your respiratory aerosols, and keeping distance are so important. We each, control its spread together.

Australia did an excellent job at this and yesterday logged zero new cases. Life there is normal; their businesses can thrive. Hospitals can go back to treating the involuntarily ill and health care workers can know they are not risking their lives by treating someone that perhaps elected to become infected via their own negligence. How can we do reach zero in the States when we are turning the corner into increasingly unprecedented infections?
If everyone were to assume they were infected and took their most extreme efforts to protect others, the numbers would plummet within weeks. Unfortunately the message that this is in our hands to control means our politicians and science deniers can't blame someone else.
This is literally on us, individually. A chain is only as strong as its weakest link, and any chain completely fails when it is actively being cut with bolt cutters by 30-some percent of the population.
The pandemic's grip ends with leadership, cohesive federal response, aggressive programs to test and trace, guidance from medical experts, and most of all, an attitude change across the population.
The problem is not a virus. The problem is an infection of national narcissism that puts individual belief, selfishness, and even disinformation ahead of the basic science of viral transmission. We control how long this pandemic will affect the nation. It can be beat without new vaccines and therapeutics, packed hospitals and lockdown orders. Other countries have done it. We have to all commit to being our brothers' keepers, and realize that if we want to be part of a healthy, happy, and prosperous nation, our most patriotic duty is to prevent the preventable.
at November 01, 2020