Investing in Postdocs and Giving Thanks


I received an email yesterday from someone I had not spoken two in probably six months.

Such things are sorely needed.  We produce way more Ph.D.s than the number of jobs to support them, so we end up with a large number of postdocs in circulation. These folks are professional scientists, as good as they get.

We just don't have enough jobs for all of them, so it is not unusual for a Ph.D. scientist to be making $35,000 a year, six years after the degree is over, with no hard promise of a job.  Interviews are ultra competitive and skilled scientists often fail at that last critical moment-- impress the committee on paper and get the interview, but fall short in person and don't land the job.

After the seminar I was approached by a 5th year postdoc.  We can call him Dr. S, since he has a very distinct name and I don't want to embarrass him.  He said that he has a great record on paper, that he gets interviewed for every job he applies to, but never gets selected for the position.

Clearly, Dr. S has some academic firepower but was lacking tools and coaching on how to communicate his science.

We spent three sessions going through his job talk.  The first one revealed why he was never chosen.  He talked over my head, lost me in the first slide, and his entire presentation was good, but didn't connect.  I didn't fall in love with his science and didn't imagine him as a good colleague.

Over two more sessions we adjusted the talk.  We changed his approach to the talk, developed a sense of audience, helped him connect as a person, built a new philosophy toward the interview, and talked about how to answer questions.

I received this yesterday: 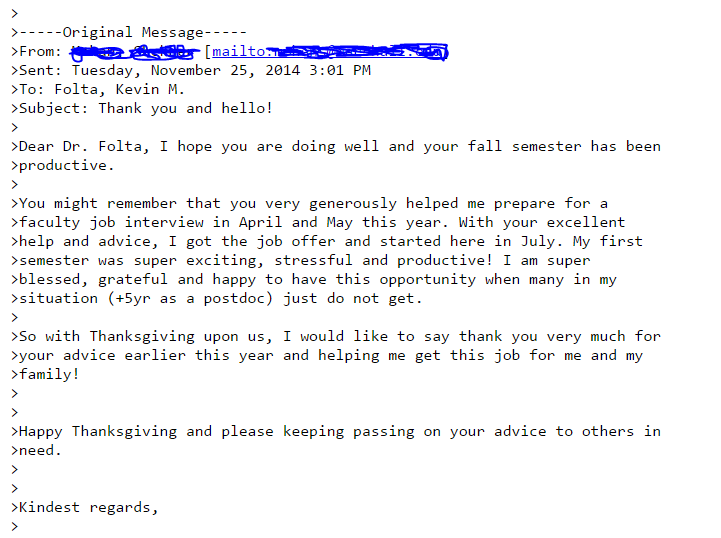 One of the many days lately where I need a science kleenex.

This is just a reminder that science needs to flow in order to work.  How many talented scientists are trapped in jobs they don't want because they simply lack the courage and training to tell others about their passions and ideas in a human way?   How many could land the job if they realized that a job seminar is not about beating scientists to death with data-- they want a clever colleague, a friend, a solution maker, someone to complement their department's expertise.

It is a classic case of forgetting why you are doing a job talk and who the audience is.  They want you to succeed, they want a new colleague, they asked you to try out for that part!  Rather than blinding them with brilliance and science-- simply share the work you care about.

Don't be the unreachable scientist on a stage. Be the clever friend down the hall.

It worked for Dr. S, and maybe it was just his time and had nothing to do with my help.  However, I was grateful for the letter.  It turns out to be probably the best three hours I invested in 2014.