Science Center : Opinion and Activism are the New Science?

I am not happy.

Opinion is the new science.

Activism is the new science.

Undocumented claims are the new science.

Arguments from ignorance are the new science.

That is, if you are a speaker at an event held by the South Florida Science Center and Aquarium.  You can watch the video here.  I'll wait.

First of all I can say that I totally predicted this.  I predicted exactly what this would be, that it would start out with some neutral and credible (well, undeniable) science and then degenerate into a scientific abortion ending in a rallying cry for food labeling and a "right to know".

I'm like a damn psychic. It is pretty amazing.  Not really.  These things are incredibly predictable, and while I warned them, they suggested that 'teaching all sides' is a good move.  Ugh.

Hey dude, science is whatever you think it is, your opinion is as good as evidence!
After all, science is about hearing all viewpoints.

The part that just makes me so mad is that a "Science Center" supported this.  It is an appeal to fear, ignorance and the typical trash.  Some of the quotes are priceless, and make me wonder what kind of half-cocked science you have to poop out on a test to be an RD in Florida.

Really?  ""If some of the bigger chunks of protein are still left over chances are they could be an allergen."

Science Center, don't we turn off a microphone at this point? 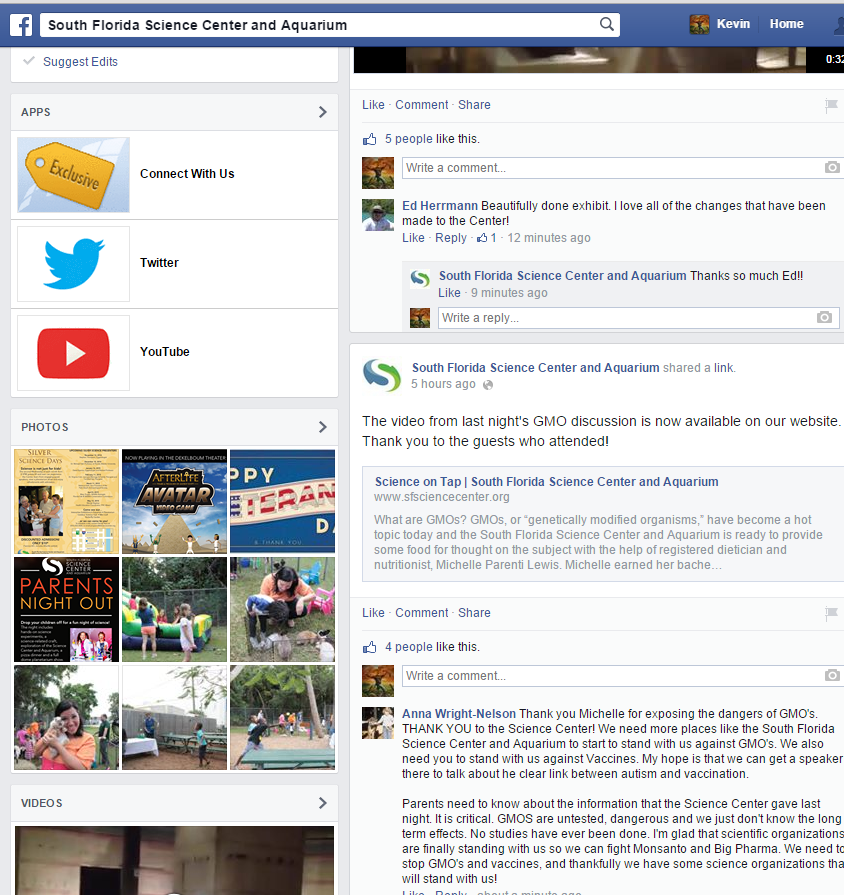 From 29 min to 39 min of her 25 min allotted time she goes off on labeling.  No evidence, no science, just her political, activist rant.

When she finally provides references, not one is peer reviewed, and GMO Myths and Truths is her major source, and activist rag that has been completely discredited by mainstream science.

Another major reference for evidence was, well, JURASSIC PARK!  The movie.  Yes, everything we know about science can be discounted by a campy horror flick.

Then if you watch the question and answer section you'll see an activist grab the microphone and spew on without moderation about Monsanto, Monsanto, Monsanto.  Nobody stops her. She goes on about the well discounted claims about Indian suicides and other myths.

I'm blown away.  Can we please remove "Science" from your name?

If it seems like I'm being too harsh it is only because I see how these solutions have helped farmers and the environment, and see what we can do going forward.  When a Science Center promotes an event where a non-scientist is allowed to make false statements and force a political agenda (as predicted), it destroys their credibility.  We need Science Centers.  Unfortunately this one has a lax idea about what science actually is.