A Letter to Support My Claims Against The Food Babe

A few weeks ago I attended the Food Babe's talk at the University of Florida. I listened to her talk about herself and provide lots of false information to my students, and waited for the opportunity to ask dismantling questions from one of the two microphones in the room.

She was paid $6000 for over an hour's time to promote her brand and spread her filth.  Now scientists and educators have to fix it.

I first wrote about the night and the lack of a Q&A period here.  The story spread quickly through social media, the place with a love-hate relationship with Hari.

Vani Hari responded by claiming that there was in fact a Q&A session, that she did answer questions from the audience.

So it is my word against hers.  Via social media she explained to her followers that she did answer questions.  We know she didn't.

The answer may be that she knows nothing about scientific presentations and that we are asked to publicly defend our claims.  She may have answered questions from adoring fans that met her by the stage afterwards, but there was no formal public Q&A, which is what we do when we make public claims.  We defend them.

In another thread she encourages those curious to call the university, because "a certain professor who promotes Monsanto... has spread a lot of nonsense". 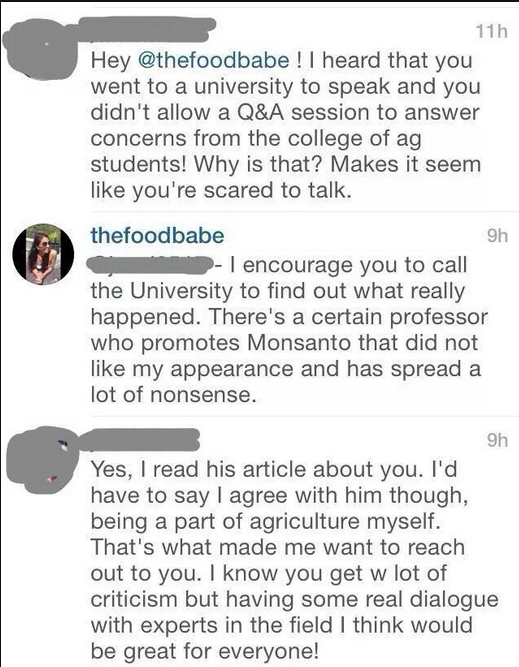 Again, she speaks from no evidence, leveling false allegations against a public scientist that only wants her to back her claims with science.  How do I 'support Monsanto'?

So how do we end this controversy?

I requested a letter from a neutral party, someone close to the event.  I received a letter from one of the central instructors of the First Year Florida course. The university hosts a series of events and readings for all incoming freshmen, and The Food Babe was one of those events (hurts to write that).

She was happy to give me a letter, and has given me permission to share it here. I am withholding her name here to protect her from harassment or allegations of her connection to Hari's imagined Monsanto Conspiracy.  However, if you would like to talk to her directly I can arrange that.

Here are some key excepts. The whole letter may be accessed here. 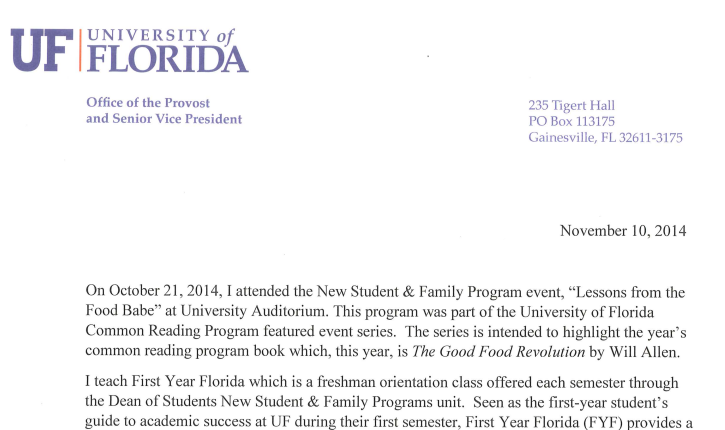 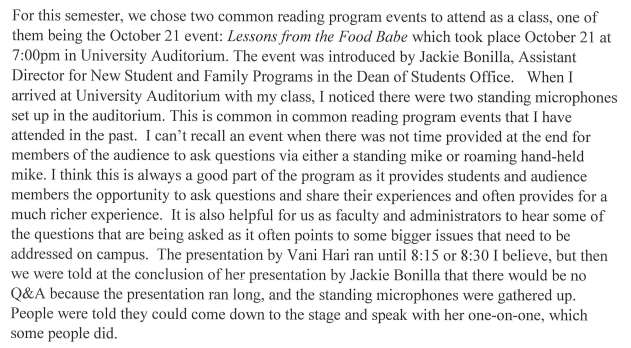 Here the microphones are noted, the fact that she would not be taking public questions because the event "ran long"  (click to embiggen) 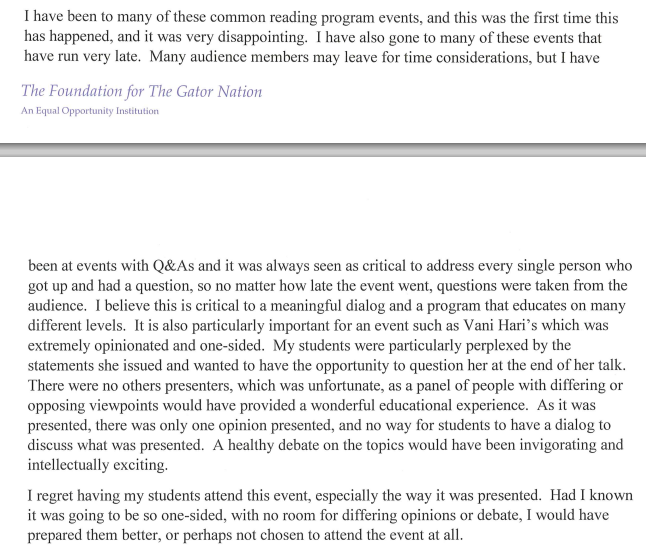 The letter affirms my claim that there was not Q&A period.  One could say that she ran overtime and could not stay.  That's not my problem and is unfair to a student audience that has questions about her radical claims.  That should be budgeted into her time.  It was 8:30 pm on a college campus, the venue was open at least until the next morning.

If she wanted to answer questions, she could have answered questions. It might have just been some exogenous semiotic entropy.

The best part is:

It is a rare day that an invited nationally-recognized speaker is referred to as a mistake.

So there you have it.  Hari did not hold a public Q&A as she claimed.  She also took the liberty of making a false association between a public scientist and university professor to a company that does not exist, purely to discredit him.

Here are two clear falsehoods that Hari stands by.  Why anyone would take any advice from her, ever, is beyond me.