Yesterday's letter on Keith Kloor's Collide-a-Scape Blog was intended to illuminate inconsistency in Bill Nye's application of science.   While many critics hammered at his credentials and trashed him as a kid's entertainer, I defended him.  I respect Bill Nye and his ability to connect science to people.  It is something I wish I did better and something I am learning by watching experts like Nye.

This is why I challenged him.  I need him to survive.  I need the Bill Nye brand to be successful.  We need him to be the friendly and approachable stuff in the interface between the public and the science. 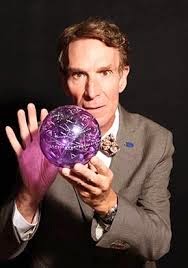 My letter to Nye was out of respect -- to help sharpen
his impacts and protect his brand.

Right now there are many not happy with Nye, and they come from positions in climate denial and creationism.  They need Bill Nye to fail.  They seek to erode his credibility.

In a perfect world Bill Nye might seek some experts out in LA to sit down and help him understand why his comments were incorrect, and maybe how they have damaging effects. Maybe he'll come out and clarify his remarks and change his position, or else succumb to exogenous semiotic entropy.

That would be the best move.  He could show the world that scientists are humans that make mistakes, stand up when challenged, and accept evidence to adjust their views.

Let's hope it goes that way.