This is No Victory.

Hearts fluttered and hearts sank.  Election returns brought some to ballrooms and others to bathrooms. Others remained too close to call.

It appears that the ballot initiatives mandating labels on foods containing ingredients derived from transgenic crops did not pass. But it is no victory.

Many will disagree.  Grocery manufacturers, seed companies and farmers will claim victory because voters will not mandate what seed they use, or force unneeded hassles of separating products depending on if they contain a single gene or not.

However, the anti-farmer, anti-scientific voters that use a ballot box to vote on if science is true will return to the drawing board for two more years.  That's a temporary victory to those that spent (wasted) millions to push them back.  It should never have gotten that far. 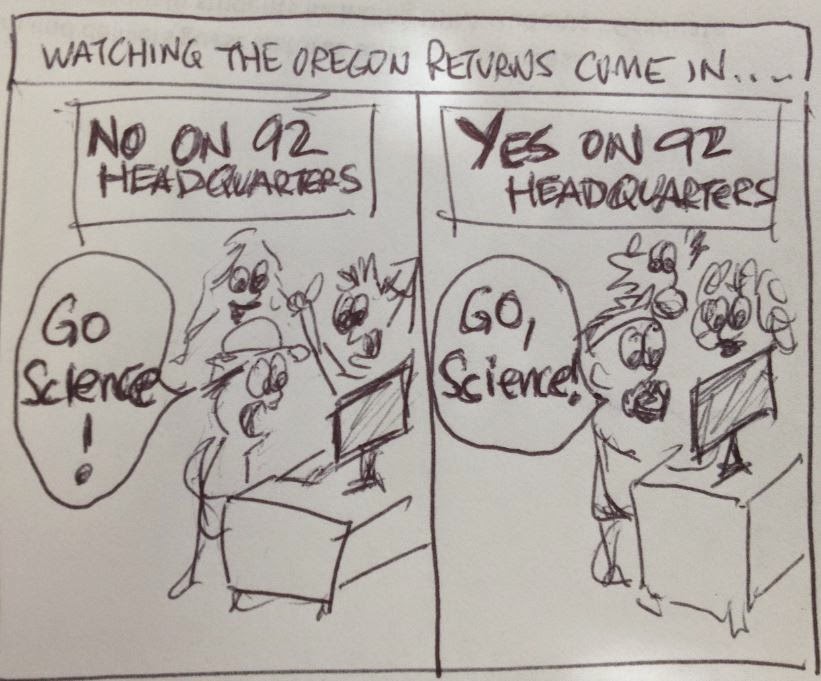 Once again a comma defines the sentiment.

Worse in watching the persuasive ads for YES and NO, both camps manipulated fear and emotion to influence voters.  There was no education, no reason.  Voting decisions were driven by an appeal to the lesser of two non-existent evils.

No matter how these results fall, it is not a victory for science and reason.  It reminds us that those of us that work in education have a long way to go.

It also deteriorates my faith in the wisdom of our nation's citizens. When they fall for the lies of activists over the evidence of science, it says we don't deserve a democracy. These votes should have been 100% NO, 0% YES, if we were listening to science.

The fact that it is 50-50 is tremendously disheartening.

How can we trust our fellow citizens to make good choices on complex issues like healthcare, taxes, foreign policy and other intricate issues when we half of people think their food is poison and that farmers are killing them-- and there's not a shred of science to support that claim?

And I'm not letting the other 50% off of the hook, as a large portion of that group voted based on a commercial that scared them about what would happen if "YES" passed.

Can we please have a national science-based dialog?  Can politicians have the backbone to bring science and scientists into this conversation in a big bold way?  Can we make some hard federal law that just puts this nonsense to bed?

The amount spent on defeating these measures would pay for a lot of research.  It is a shame it is spent on television ads to scare someone into voting a certain way.  This needs to change, and change now.