One big difference between scientists and activists is that the latter have no problem using manipulating language to scare the public.  The former uses information to help the public make sound decisions.

Here's a stellar example from GMO Awareness.com.  It features fossil biotechnologist Dr. Theirry Vrain, a guy that used to work on the genetics of nematodes and used some molecular biology tools in the process.  Since his retirement, he's enjoyed the stage as one of the handful of sort-of-scientist darlings of the anti-scientific, anti-GM movement.

It bothers me when guys like Vrain and Huber use their former credentials to perpetuate bad science today.  Maybe I'm a little pointy because I was asked to analyze his YouTube video and it cost me an hour of my life I'll never get back.

However, it did help me understand who he is and why the anti-GMs love him so. 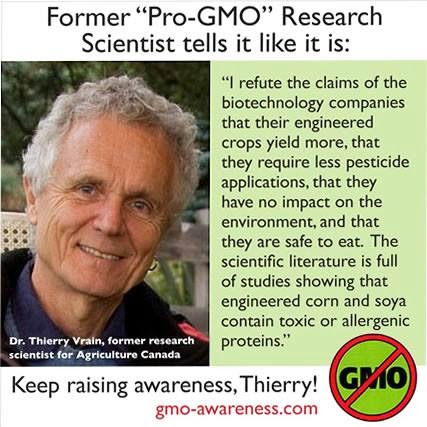 The sure love Thierry.  He tells them what they want to hear, and aside from a good 1980's understanding of molecular biology, almost all of it is wrong, and packaged to be cleverly deceptive.

At least he starts out by saying "I refute" rather than making statements that claim to represent broader science.  Of course, the data show that yields are often better (despite no genes added to increase yield) require fewer insecticides and safer herbicides, which are of positive impact for the environment.

No evidence has ever shown them to be unsafe to eat.

The last line is the winner-- Yes, they have been shown to contain allergens, the same allergens as in non-transgenic corn and soy!  Plants make allergens!
In this little blurb it is cleverly stated to induce the freak-out factor, to manipulate the malleable mommy middle that will make decisions on fear over logic.

So why does the anti-GMO movement love Vrain?   Simple. He has some technical knowledge of the techniques, that's quite clear.   He's the closest thing they have to a scientist with a clue, and he tells them exactly what they want to hear.

So where did he go goofy?   According to web-based sources, about 10 years ago he retired and "reinvented" himself.  He now lives with his herbalist partner, and they teach workshops on organic farming.  So there you go.  Cultural Cognition 101.  If you are into curing your problems with herbs and organic farming, then you have to hate transgenic technology.

Here's an excerpt from a radio interview that 'splains it-

An online bio gives some sense of where this nonsense all comes from.

The good news is that the dollars of the credulous will finance his appearances well into the next decade, as they line up to hear him slam good technology.  The bad news is that carefully crafted deception as seen above, will continue to plague scientific decision making, clouding the atmosphere on this important issue.