Standing With Hilborn through Manufactured Controversy

Ever since the brutal treatment I received last fall, and continue to receive, I have vowed to never let another researcher stand alone in fighting misplaced activism. Your public scientists are under ideological interrogation with personal attacks that seek to destroy reputations and careers. Here is the latest round in this fight of pseudo-religious-belief against the inconvenient truth offered by an independent, academic scientist. We must take control of this narrative. The truth must dominate this narrative.


Greenpeace has waged a vicious attack on a leading researcher and environmental advocate.  Dr. Ray Hilborn, a University of Washington Professor and a recognized leader in fisheries conservation for decades, has drawn fire from this activist organization because he reported data that were incompatible with their agenda.

A researcher does good research.  Activists don't like the outcome. They trash the researcher because industry funded work in his program. No evidence of misconduct was ever implied.


Today if you are a scientist and you present data that don't fit the story activists demand that they do, the default assumption is that you must be the puppet of a major corporation that has influenced those research outcomes.  We've cataloged this well in climate, vaccines, GMO crops and other areas.

Hilborn is the latest public scientist forging his way through this dangerous new trend-- well-funded activist groups impeaching the careers of lifelong academics that present research incompatible with activist beliefs. Organizations like Greenpeace use the internet to attack a scientists' credibility, acting as merchants of doubt. They do not question Hilborn's published data or its scholarly interpretations. They don't know enough to do that. Instead they attempt to tarnish the man with personal attacks.

Why is Greenpeace so green and non-peaceful?  Hilborn used a bit of corporate money to perform scholarly research. If that money supported research outcomes that aligned with Greenpeace's agenda they would not care.  However, some of the sponsored research was in conflict with Greenpeace's opinion, so they must defame the scientist that threatens their (thin) credibility and thus, financing.

Hilborn studies fish populations.  He has an incredible publication record and is amazingly prolific. As of today, 32073 people have cited his work in the peer-reviewed literature.  His work uses modeling and measurement to examine fish populations in discrete areas and  has published an evidence-based dissection of various fisheries all over the world.

The reason he has drawn the ire of Greenpeace is his sober, numbers-based interpretation of the state of the world's oceans. In one summary article he wrote:
"To be fair, there are some places where such severe (fish population) declines may be true. A more balanced diagnosis, however, tells a different story — one that still requires changes in some fishing practices, but that is far from alarmist. But this balanced diagnosis is being almost wholly ignored in favor of an apocalyptic rhetoric that obscures the true issues fisheries face as well as the correct cures for those problems."

Overfishing denier?  Nah, just a guy that chases the evidence.  He was second author on a 2009 paper in Science that stated that while many fisheries were in crisis, others were recovering or were not threatened. He says the often-cited statistic that 70% of the world's waters are overfished simply is not supported by data.


In short, if you are not sounding an alarm, someone must have paid you off to not pull the lever.

To amplify the activist cause, they find complicit journalists that are willing to report their claims in biased articles that tell part of the story.  This too fits the formula.  In this case Hilborn's story was picked up by NPR, because reporters smell blood in the water and don't know enough to realize it's just cherry Kool Aid.

The main allegation is that he "failed to disclose" industry money.  Sound familiar?  If personnel and materials for a given paper were funded by a certain organization, they were mentioned appropriately, with fully disclosure, in the acknowledgements of that particular paper.  That's normal and customary.

What Greenpeace wants is for him to mention ever speck of funding for all projects because they feel that those sponsors actively manage the outcomes.  The funny part is, he gets buckets of money from environmental and conservation organizations. 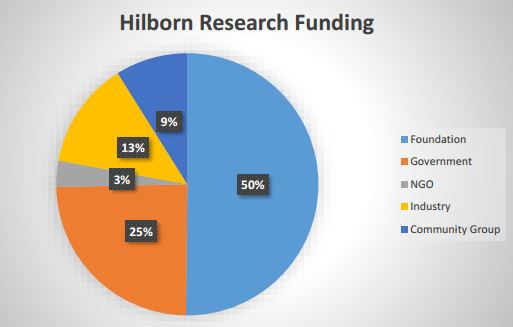 Hilborn's funding is mostly from foundations and government. Yes, some fishing industries are glad to fund research with a recognized expert that understands impacts on sustainable fishing.  from: https://rayhblog.files.wordpress.com/2016/05/hilborn-response-to-greenpeace.pdf

His CV is available online and offers an extensive list of funding sources, from corporations and conservation groups.  In a recent NPR interview he states that the fishing industry is interested in funding studies on over-fishing and development of sustainable fishing populations. There's a surprise.  Where I live the citrus industry is in collapse and is funding huge amounts of research at the university to find a cure. That's who should be paying for it.


Hiborn's story is a little like mine in that he disclosed funding sources where and when appropriate. If he could do something better it is to engage in radical transparency going forward. In an age where evil people are poised to destroy everything you worked for in public research, you have to go one step further and be beyond transparent.

My recommendation to Dr. Hilborn-- put a link to your CV on everything, even direct link in your pubs, or provide a semi-annual report that is publicly touted as a leading example of transparency. Then ask Greenpeace to do the same.  Good luck with that.

Hilborn is a magnificent example of what public science should look like.  Work on the public dime, work financed by foundations, and some work that is done for industry.  The data don't care who paid for them.

Integrity is what matters and what will shine here.  Prof Ray Hilborn is an asset to his university and to academic science. We better all start standing up and making some noise when people like him fall under attack simply because he had the nerve to publish science.