Science March- A Stage for the Illegitimate

I've taken a lot of heat for my criticism of the planned Science Marches. Getting scientists to coalesce around anything is a rather monumental task akin to herding cats-- if cats were on Segways programmed to move randomly at high speed. Taking a united stand against the erosion of science funding and science standards is a good thing.

But as I mentioned earlier, is this the best investment of our energy?  Maybe, and we should probably do it.  But let's do two other things:

1.  Stand up for science by making a commitment to durable, sustained efforts to fight science illiteracy and teach the wonders of our physical world.

2.  We must label, criticize, ostracize and shame the pseudoscientific organizations that will co-opt the Science Marches nationwide. 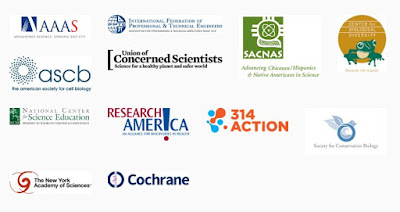 "Partner Organizations" contain some great organizations, but also a few that actively fight against science they find inconvenient or helpful in fundraising.


A Mess on the Horizon

I can see this shaping up to be a stage for anti-Vaxers, March Against Monsanto, and creationists.

They don't need a lab or peer-review to legitimize their science-- all they need is a stage and a camera and someone claiming the dangers of vaccines, glyphosate or GE corn has as much instant social media cred as Paul Offit or Norman Borlaug.

There clearly will be an element of Trojan Horse, as these organizations are poised to potentially be a bigger presence than the scientists themselves. Remember, they have time and money, things scientists don't have.

Already On the Inside

Organizations that espouse less-than-scientific positions have already permeated the organization. They are riding the credibility and visibility of this event to advance their own causes,


Environmental Voter Project- Not sure what they actually do, they seem to be interested in climate, but have Annie Leonard from Greenpeace Executive Director featured as "Leader"