Another often-used tactic to harass scientists is the creation of multiple accounts in social media by one person.  These are then used to create the illusion of multiple interests with a common theme of a unified argument against a scientist or idea. They are used to post defamatory and false information and propagate it using Twitter's powerful reach.

These highly coordinated troll attacks are likely orchestrated by a single person that creates a series of accounts that interact and reinforce each other.  It creates an illusion of a codified message, when it is just one nutcase stirring the pot.

It happened before, and after years of abuse an internet sleuth figured out who it was.  She is a professional in California. When I was out there I met with her and she told me all about how it was a guy she was renting to that would use her computer. Sure. I've never posted her name or taken legal action.  Both are still on the table.

This week a whole new set of fake accounts popped up and unleashed their vitriol.  You can monitor them here. 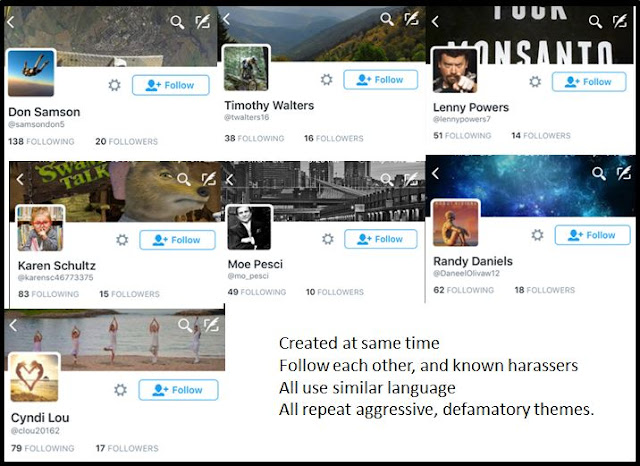 Why it is clear it is likely a single person: 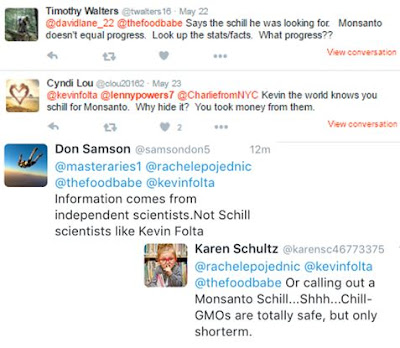 If you google the words "Monsanto Schill" you can find a good candidate for who this likely is.

In conclusion, it is more of the kind of harassment we see as scientists that simply stand up for evidence-based interpretations of popular assertions.  It is another volley with the intent to create more harm toward my reputation and record by propagating defamatory memes and misinterpretations.

I guess a silver lining is that they tell the world I run GMO Answers. Not sure why they'd give me credit for such an enterprise. And no, I could not name a Monsanto product. I don't work in agronomic crops.