My Letter to Vani Hari

Public records requests are an important tool for journalists and other investigators to obtain information to check public employees' for episodes of wrongdoing.  Today there are two alarming trends.

1. Politicians with deep pockets and plenty of attorneys find ways to make sure the records are not made public.

2. Scientists that do not have deep pockets and attorneys are seeing abuse of the system for elaborate witch hunts, expeditions that find no evidence of wrongdoing, yet result in potentially career-damaging manufactured narratives.  In other words, when you teach a scientific topic or do research that some find objectionable, your records can be used to harm your career. It has been seen by researchers in climate, vaccines, animal research, genetic engineering, and most recently, fisheries.

Last year my institution received a Public Records Request from Vani Hari, The Food Babe.  It was indeed curious, and it didn't take long to realize that this was retaliation for my scientific assessment and criticisms of her claims. On her website, she states that she feels Monsanto compelled my speech. She also publishes false information about me and my statements about a relationship with that company.

Mega-extreme narcissism alert!  When a scientist objects to you lying to students at his university--- it must have been because he was paid off by a company.  Makes perfect sense.

When offered an opportunity to win public sentiment, will she choose the path of harassment and slander, or use her talents in concert with the scientific community?

My university compiled 2707 pages of my private email, redacting anything that had student information or proprietary information. She requested we search "Food" "Babe" and "Food Babe", "Vani" "Hari" and "Vani Hari" among other terms.

No Monsanto smoking gun, because there was no gun to smoke. I just saw many private conversations that had nothing to do with her, but mentioned one of these terms. Consistent with the law, all of them are included.

I read through them before our university lawyers did.  Nothing there. So I thought that I might do a test, extend a gluten-free olive branch to Ms. Hari.

I sent her a letter telling here there was nothing to see, and suggested she repeal the request before it cost the public a small fortune.  That's a good gamble.  She'd be viewed favorably, win back some of the middle that sees her as a bully, and maybe ingratiate a scientific community that sees her as an annoying loon.

If she decided to proceed, and there's nothing to reveal (which there isn't), she just confirms everyone's beliefs that she's a profit-driven narcissist happy to waste public money because she knows more than scientists.

Worse, if the records are released and she proceeds to fabricate stories like Thacker, Lipton and others did-- she'll look awful.

I gave her a choice and welcomed her to embrace science.

Here is the letter I sent. 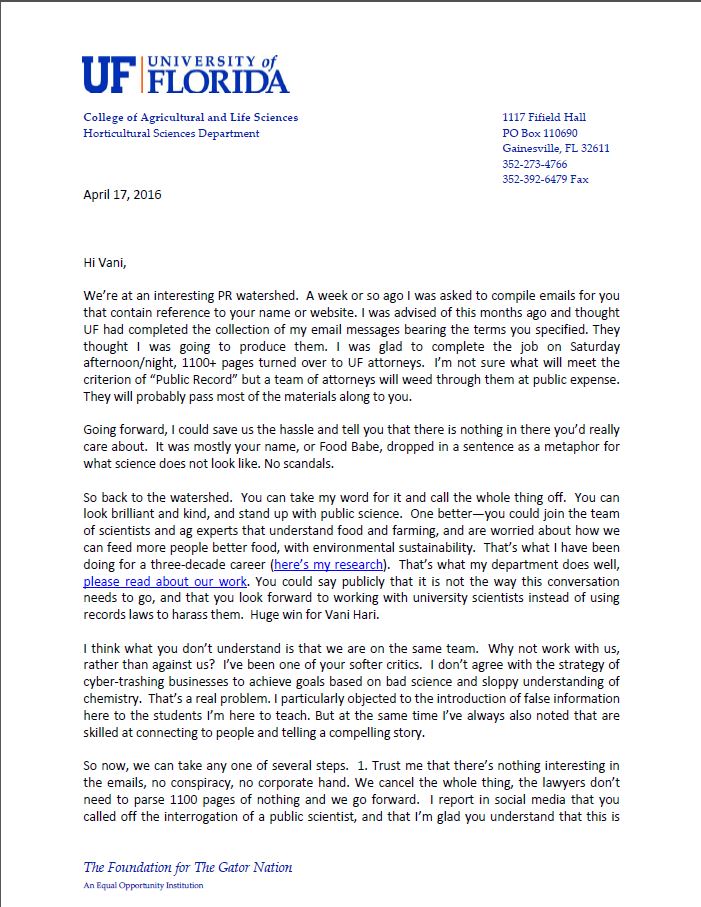 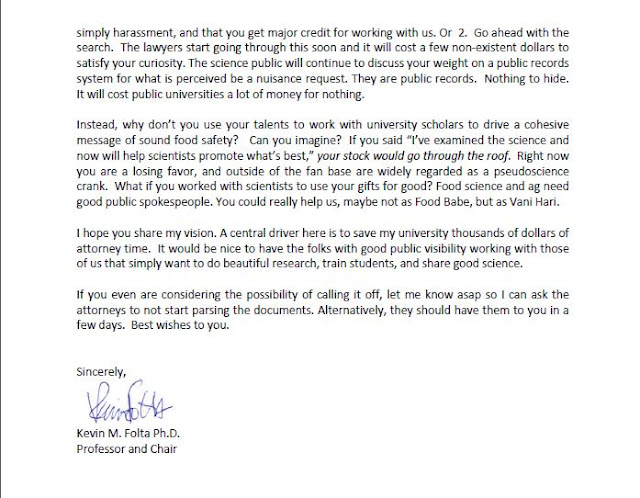 The disparity between my "1100 records" and the actual 2707 is because the university conducted their own search of my records. I did not include the full attachments, which are talks available on Slideshare, and other redundant documents. The university gives everything!

It is quite a concept.  Unfortunately the desire to push forward with the fishing expedition tells me that I best brace for Round II of manufactured, damaging claims.

My letter was sincere. If she were to step to the science side, her star would rise to amazing heights.  She could be a science communicator rather than a shill for her own image and endorsements.

It will be an interesting couple of weeks.