Last year the National Academies of Science convened a panel of experts to discuss genetically engineered crops.  The panel listened to a huge range of testimonials and opinions.  They hosted everyone from Jeffery Smith, to Jon Entine, to a pile of scientists spanning many disciplines.

The discussion was vetted against the scientific literature, and you know what we learned? 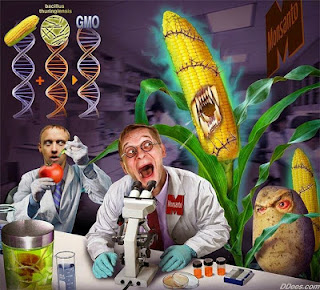 This image has nothing to do with the article.
Anyone know a good tattoo artist?

We learned that GE crops pose no special risks over conventional breeding, that they help farmers by cutting costs and marginal effects on yields, despite no yield-associated genes being installed.  There is no evidence of effects on health for humans and animals, and environmental risks are understood and should be addressed.

We learned what we knew, and what we already teach.

The report also speaks of new ideas for a regulatory framework that makes a lot of sense. Every crop/gene combination should be weighed on its own merits and risks.

Is the report useful?  Yes.

The report synthesizes the existing science well and is an excellent reference. Scientists will find this extremely useful and the public will applaud a resource for accurate, vetted information.

But will it change minds?  No.

I think you are more likely to see the anti-GMO machine sift through the funding histories of the people on the panel, and a single sponsored program from Big Ag will be used to cognitively negate the entire effort. They might even FOIA the folks on the panel to see how Big Ag fed them the report, and when they don't find any evidence, they'll just make it up.  Business as usual.

The committee should be applauded for their efforts and sacrifice. This was not a trivial piece of work and represents a great milestone in condensing the breadth of work into a single, conservative, scientific, and evidence-based work.  As an agent of social change-- all the evidence in the world won't change the minds of people that don't care about evidence.