Translating Activist Spin: How They Lie to the Public

Two weeks ago now an activist brochure was distributed through the internet, promoted as exposing "alarming" levels of glyphosate in common grocery store items.  The report did not provide adequate methods, statistics, or evidence of replication, and therefore does not qualify as work that can be trusted.  I have spoken with the laboratory that did the work.  They claim to have done the test correctly, but did not provide evidence of that or any statement of the numbers of replicates.  They won't do that because the data belong to a paying client.

And of course, the paying client has no interest in transparency, as that would let the air out of the fear balloon.

My comments and criticisms were all correct and within the bounds of conventions of analytical chemistry.  Others have been much more critical and feel that there's no way these results should ever be trusted.

Bottom line-- it is unacceptable to scare the public with false statements about un-trustable data.

So how does the anti-science movement handle this?  Attack the scientists!  Here is my translation of today's article over at Sustainable Pulse. 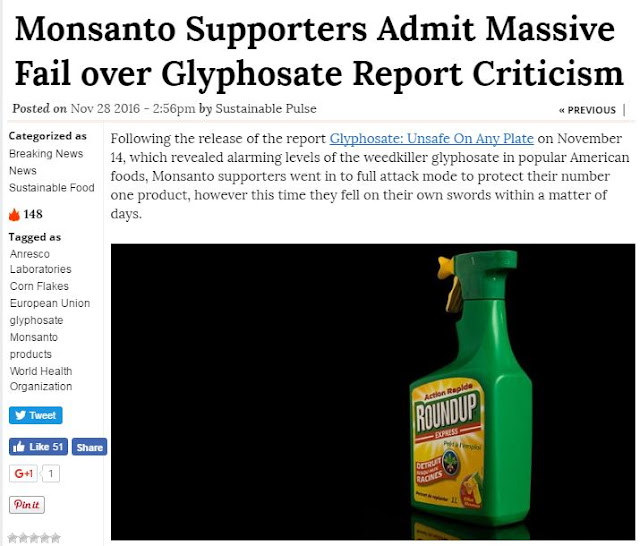 Translation:  Scientists that know about this technology present ideas that are incompatible with our beliefs and our mission to scare the public.   Monsanto supporters?  In order for activist groups to demonize independent scientists they must attach them somehow to Monsanto.  They make a claim of "Monsanto Supporters" when there is  no evidence that I support Monsanto,  Not sure how I do that.

"Monsanto supporters went into full attack mode to protect their number one product.."

Translation:  Scientists appropriately criticized an underpowered brochure that made claims that exceeded the data.  That's my job as a scientist, to analyze claims and vet them against convention and the literature.  That's not an "attack" and it is not my product.  It is not even Monsanto's product, as glyphosate has been off patent since 2000 and many companies make it.

Translation:  The analytical chemistry group that did the analysis did not find reliable numbers for most of these products and stated that clearly.  Where they allegedly were detected it was done without providing a method, and no idea of statistical variance between samples.  The levels do NOT present significant risks, in fact they present no risk unless you are planning to eat millions of boxes of crackers. 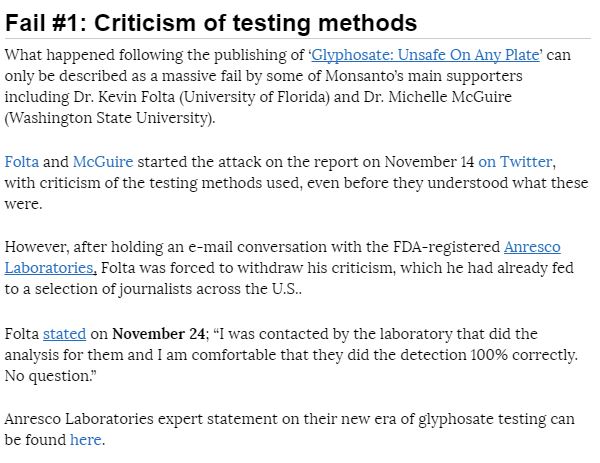 Translation:   Folta and McGuire (two scientists that understand these techniques) criticized the slim methods provided and lack of replication.  Folta took the time to discuss the methods with the laboratory, and they claim to have done the proper work, after they original report and laboratory analysis certificates made an incorrect statement about the method used.  Or of course, they did it exactly as they stated and now that scientists are criticizing that technique, the company changed its position. 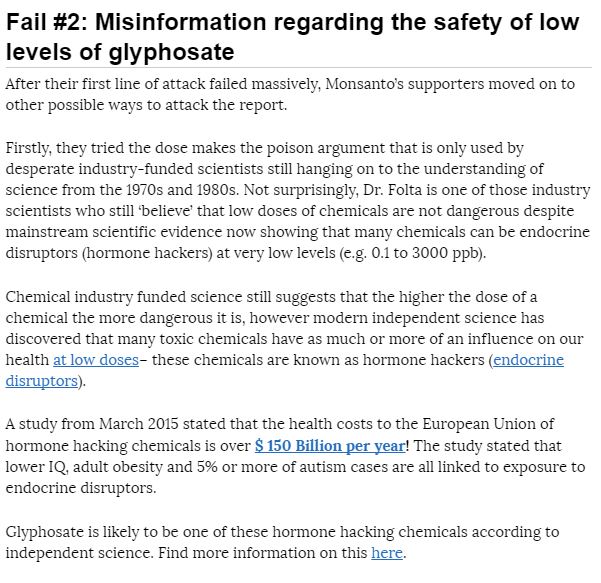 Translation:   Firstly, it was appropriate criticism of an inadequate technique as presented in the original document by the analytical chemists.

But more importantly, look at how they paint public scientists that correctly and appropriately criticized their fear-mongering brochure.

Scientists adhere to the concept that dose-response relationships exist in almost all cases of pharmacology and the exceptions are rare.

The evidence of glyphosate being an endocrine disruptor is thin, and never demonstrated outside of a petri dish.  In other petri dish studies the same results were not seen. 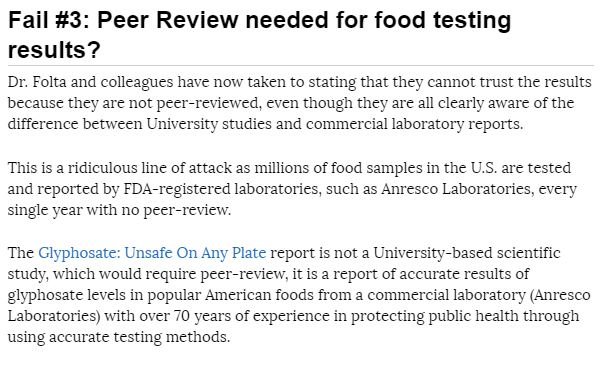 Translation:  You should believe activists that misinform the public over independent public scientists.  Peer review is important.  A non-reviewed document is meaningless if it has political or economic intent, which is what Food Democracy Now does.  Would they accept a report from Monsanto?  Of course not! But they will accept anything that confirms their biases.

1. It is not clear if all of these numbers are accurate, Anresco says that clearly.  It has confidence in a few of the samples, the vast minority.  Most have no detection or low detection.

2.  The levels are remarkably low and pose no risk if consumed.

3.   You know they are dishonest by repeated mischaracterization of me as a "Monsanto Supporter" and "industry scientist"  There is no evidence to support those statements.