After commenting on the New York Times piece that claimed that genetically-engineered crops have failed due to no effect on yield, I decided to revisit a slideshow I prepared back in 2014.  I was on a panel in Denver, CO to discuss risk, benefit, gain, loss of genetically engineered crops with a diverse group of farmers, scientists, physicians, activists, NGO leadership and corporate representatives.

I was tasked to be on a point-counterpoint discussion with Doug Gurian-Sherman, then with the Union of Concerned Scientists.  He wrote the notoriously cherry-picked and underpowered (yet highly influential) brochure "Failure to Yield", and indictment of the failure of genetically-engineered crops.

My point was simple.  GE crops were not made to directly increase yields.  They control other aspects of growth so that yields are maximized.

Yields are determined by how genetics interact with environment, and how pest pressure, weather, and dozens of other factors impact the plant.

So what do the data say?  Here are a few examples from the talk. 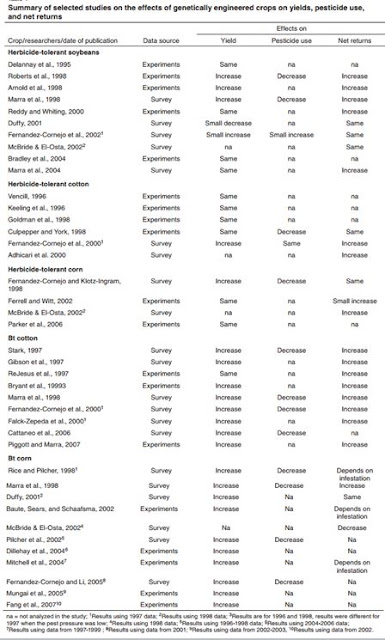 The results of this meta analysis show how the net effects of adopting GM crops over conventional, comparing yield and pesticide use.  Hakim claims yields are flat and pesticide use increases. What do the data actually say?

Interpretation:  Yield and pesticide use depends on the crop, pest pressure and other factors. However, the net benefit is generally positive. 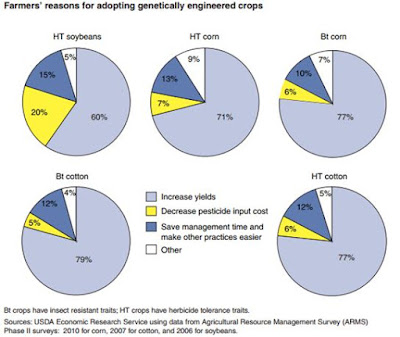 Interpretation:  Farmers seem to think their yields are good and pesticide costs lower. 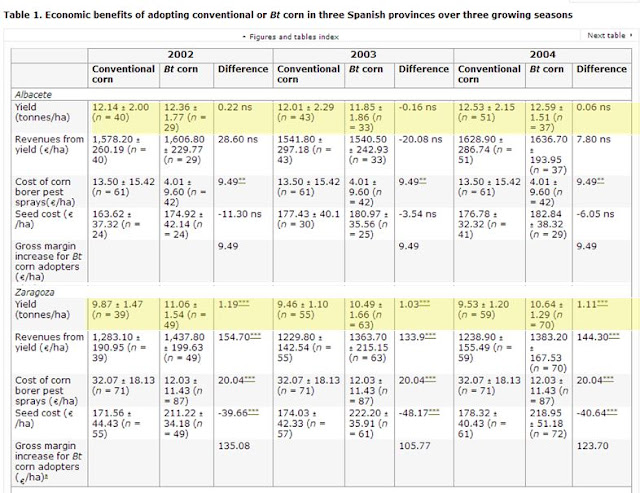 INTERPRETATION:  I think I did the highlights. Yields are the same across all three seasons. However, the farmer's profits are higher, even with the higher costs of the product, which are offset by decreased corn borer control costs. 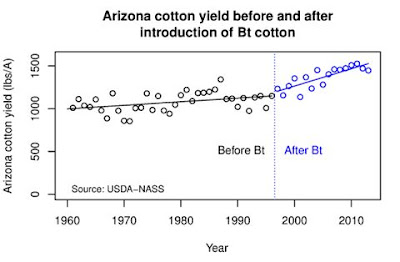 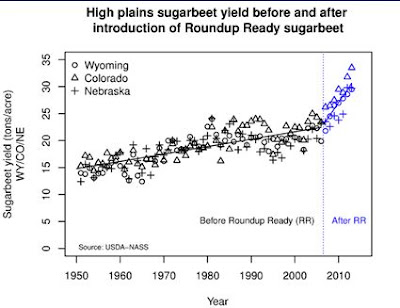 These two tables show cotton (top) and sugar beet (bottom) data from various states, before and after adoption of transgenic traits.

INTERPRETATION:  Traits help yields in these locations over these years.  USDA data. 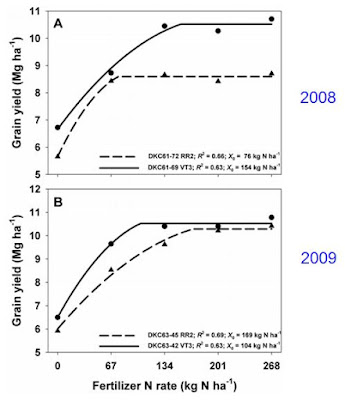 The dotted line is a Roundup Ready corn variety.  The solid line is the same line with a Bt insect control trait.  Yield is shown over two seasons as a function of nitrogen input.

INTERPRETATION:  Yield depends on many variables. In 2009, the Bt trait is invisible.  No effect on yield.  But in 2008 the Bt trait had normal yield, the non-Bt had significantly lower yield.  This is an important figure in the discussion.  While the Bt trait did not increase the yield, it made sure that the inherent genetics were allowed to produce to their full potential.  I'm not sure where I got this graph from.  Poor scholarship. I'll figure it out later.

YES, these are selected and biased examples and there are plenty out there that show no difference.  I just thought it was important to reinforce the idea that yields are not always the objective, and certainly there are documented cases where GE traits matter.

I hope these resources prove helpful in your continued discussion of the New York Times article.