Thanks Snopes- A Big Win for Science and Reason

I'm up on a Saturday enjoying a big cup of coffee and working on the podcast. I'm also standing by for the next round of requests for my emails from Vani Hari. What happened?

Yesterday's blog was in response to an article on Snopes.  The article on Snopes was in response to a flashy brochure that claimed to find herbicide residues, in parts per billion (seconds in decades) in familiar foods.  The well-circulated activist rhetoric was intended to scare, and it worked.  My inbox was flooded with inquiries from friends, relatives and dozens of strangers.

When Snopes talks, people listen, and their analysis was a bit confusing, sort of lending credence to the claim, as well as stating that glyphosate herbicides were carcinogenic. 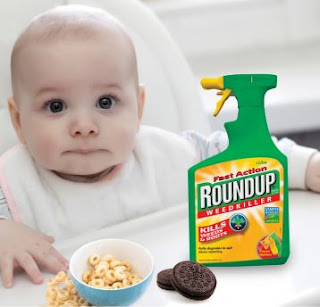 This is on the cover of the report. It should be an immediate tip-off to the reader that this is highly suspect and intended to tell a manufactured story, not communicate scientific results.

I reached out to the author and participated in the online discussion.  Within 24 hours the author, Alex Kasprak, made good corrections that reflected the simple fact that the data were not peer-reviewed, they originated in activist literature, and were purely intended to scare consumers.

Huzzah for science and reason!

But more importantly, huzzah for Snopes and Alex Kasprak.

But news of this change did not resonate well with food activists and anti-GMO interests.  The Food Babe, Vani Hari is not happy. She's convinced that the claims are legitimate.  On her blog she refers to the alleged detections as "poison in your food" and when the Snopes article changed, it must have been the work of....

Yes, an author on a fact-finding site refines a message to be scientifically precise after a nudge from a scientist that understands the technology.  So it must have been Monsanto.  Of course. 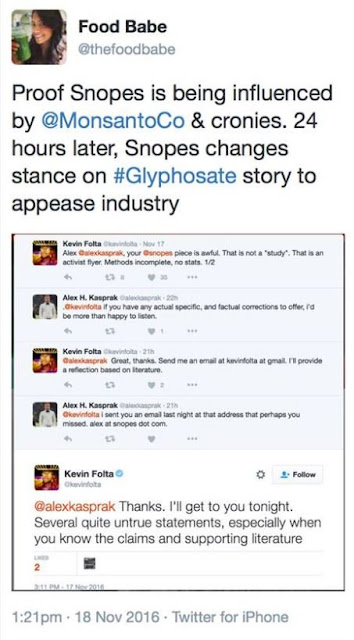 Oh Vani, A scientist speaking to a journalist about science is not "proof" of Monsanto influencing Snopes. I'll start gathering my emails for you so you can make sure at public expense...

That's perhaps the saddest part of this chapter.  A debunking website and a scientist work together to correct an important record.  A food activist with a motivated following screams conspiracy.  Sadly, her followers remain misinformed, but also suspicious and maybe angry.

In the end, I'd be very happy if she'd have a talk with Kasprak, understand what he saw in the communication that motivated the change. That's science, and that's how we operate.

I won't hold my breath.  Unfortunately she does not realize how her credibility and lost celebrity would skyrocket if she humbly admitted she's off base, and committed to working with the scientific community to improve healthy food and healthy diets.