Snopes Claims About Glyphosate in Food

So many times I've been rescued from a critical debunking excursion because someone had provided excellent analysis that I could use as a starting point.

It is really disappointing to see them go soft and conflate unrelated issues that just confuse the reader.

The article about the Food Babe's claims about Monsanto covering up glyphosate in food items seemed like it would follow the science and once again foist her on her own critically underpowered petard.

But instead the article by Alex Kasprak just creates confusion.  Even the subhead says, "Monsanto suppressing evidence of cancerous herbicide in food?"

(and to be fair, Alex did reach out and we're discussing this. I do think he wants to get it right)

Instead of simply letting the air out of a conspiratorial claim, he conflates three issues at once, an in the process lends credence to the crazy claim, while not critically evaluating the others.  Here's the problem:

This is the headline of the article.  A highly-suspect, statistically bankrupt activist brochure is referred to as an "independent study" -- a term usually reserved for actual research.

Next, the author presents the synthesis of the claim as "Mixture" meaning that the claims present some legitimate points.

This should read FALSE.  Done.  Enjoy your Ritz crackers.

But the author expands upon the claim and folds in a non-seqitur conclusion about glyphosate that is not accurate either. I see his intent and understand how he got to those conclusions, but they are not relevant to the claim.  Here's the whole thing: 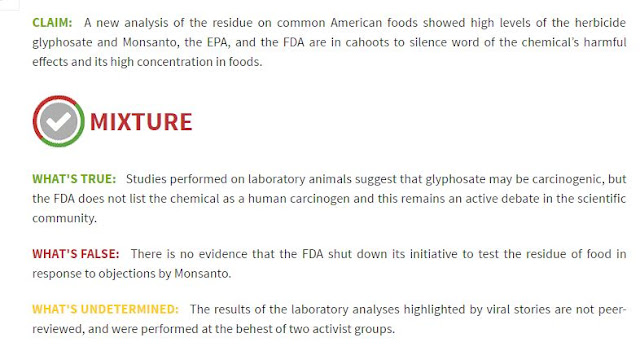 What's true?  Well he says that "studies performed on laboratory animals suggest that glyphosate may be carcinogenic" and that is not the case.  Glyphosate has been evaluated by hundreds of independent peer-reviewed efforts and certainly by many federal regulators in many countries. They all have concluded that it is not a carcinogen.

The only departure is a hazard-based assessment by the IARC last year that used a thin set of reports to make the conclusion that glyphosate was a "probable carcinogen".  This was a hazard-based report, not considering actual exposures.  They also didn't derive their conclusion much from animal studies.

I also reject the premise that this is "an active debate in the scientific community."  Scientists are scratching their heads over this, and why the media is complicit in giving fuel to activists claims built on thin science.

What's false? -- of course, that section is consistent with the scholarly literature.

What's undetermined? -- The author says basically that the results might not be trusted because they are not peer-reviewed and come from activists.   Under that premise alone, the results are not evidence of anything!  They are a claim on a website as valid as the picture of Bigfoot fur is a "mixture" proof of the existence of Bigfoot on Snopes.

Plus I have described in yesterday's blog why the activist brochure is not even close to fit for peer review and why the data are likely unreliable.

For Snopes to get this right the claim needs to be broken down into three independent claims.

1.  Are the data in the report believable and do they represent a rigorous test using proper methods and statistical representation?

2.   If the results are real, do the levels claimed to be detected pose a carcinogenic threat to humans?

3.  Do the prevailing data on glyphosate substantiate its hazard-based description as a "probable carcinogen?"

The answer to all three is no, no, and no.  The only one that is even open for discussion is #3, and evaluators worldwide are constantly scrutinizing the compound.  The best evaluations from Germany, the USA, and many others have shown repeatedly that there is no legitimate evidence of a cancer risk at the levels used or in exposure to its residues.

The problem is that what I think is an honest effort from Alex Kasprak conflates three separate unrelated questions and in the process accodentally misinforms the casual reader that is simply looking at their cheerios, their kid, a cheesy activist brochure, and then turning to Snopes for a trusted synthesis.

I hope he corrects it.  Unfortunately the Food Babe and others will use FOIA to gather our email exchanges and then say that he was just paid off by Monsanto, adding to the conspiracy.  Same old, same old.