There is a central rule in the anti-GMO world--  scare them at any cost.

It is amazing how ethics are disregarded in the interest of peddling a fearful message.  It has long been part of the anti-GMO industry and a weapon of its foot soldiers.  If something sounds scary and supports your beliefs, then promote it, run with it.  No matter how weak the evidence is, claim it is real.

Such was the case with the "Stunning Corn Comparison" where fake data in a soil test table were claimed to represent biological samples-- that were not remotely biological.  Still the authors and pundits stood by it as a legitimate test.

They also claimed to find glyphosate in breast milk.  However, an actual study by a real scientist with properly reported methods did not show any evidence of detection. Of course, anti-GM folks shouted down this legitimate report as unreliable.

Fake data, finding positive signals in noise, and wrongful interpretation of good data are cornerstones of their strategy.  Over the last couple of years we've endured report after report, claiming to find glyphosate (well, claiming to find "Monsanto's Roundup") in everything they report.

Everything.  Nothing has ever been reported as zero-- and that's important.

This is mostly because they misuse a commercial test for detection of glyphosate.  They use it with an untested solution that likely would inhibit the reaction, rendering a false positive.  To them, that's gold.  A false positive is still a positive!

But the latest round is a series of tests that claim to use LC/MS to detect glyphosate (I mean, "Monstanto's Roundup") in everything from breakfast cereals to organic cookies.

The alleged detection was commissioned by Food Democracy Now.  It was not peer-reviewed, but instead presented in a flashy brochure intended to scare.  This is critical, as the methods are incomplete, there is no evidence of replication, there is no statistical treatment presented, and the effective limit of quantitation was not calculated for extraction for specific matricies. It is not peer-reviewed because it would not survive peer review.

However, last year they hammered the actual peer-reviewed report that did not detect glyphosate in human breast milk.  The work was done by Dr. Shelly McGuire of Washington State University, properly developing an extraction protocol for breast milk and then using proper LC/MS detection methods, replication, statistics, and independent replication of the results.

Of course, FDN didn't exactly appreciate the findings. They promote soft science in their brochure, yet trash a legitimate piece of work done by a real scientist.

When you don't find glyphosate, it's "Slack Science".  It also was not a "Monsanto" study.

The company that  performed the FDN work was Anresco. They place information on their website and in their literature that seems legit, claiming to use LC/MS to detect the compound faithfully.  That's all good.  They discussed concepts like how the sample was derivitized and the use of HPLC etc that all seems kosher.  When doing the detection you should see results presented like these where they analyze glyphosate quantitatively in water.

However, they never discuss extraction.  This is a big deal.  They say water and methanol, with no further explanation. If you dig into the report, they show a method developed for beer and barley tea. Hmm.

They are dealing with complex matricies like ground oreos and other food.  Perhaps they can detect glyphosate and AMPA, but it can't be described as linear and reliable until they show that the extraction protocols do not affect faithful detection of spiked samples to show that there is a relationship.

This becomes an important issue when you perform derivitization. Targets to be detected are best visualized when they have certain chemical characteristics.  Derivitization can be thought of as a process that chemically optimizes compounds for detection in this technique. This is important because if there are a mixture of similar compounds, they could take on similar characteristics after derivitization, causing noise in the assay.

All is well and good until you start to attempt to detect a given compound that was pulled from different starting materials. Cheerios are not Oreos. Do all compounds isolated perform the same after derivitization?  Not necessarily. This is why scientists performing LC/MS prepare specific extraction and validation tests for individual matricies (Cheerios, Oreos, Stacy's Chips, etc).

The fact they claim to detect the compound in non-GMO verified crackers and pita chips says that there's something wrong here. When you are detecting glyphosate where it should not be found, that means that you need to evaluate the detection method more carefully, or at least show some statistical representation of the range of alleged detections.

But what did the report say?

Here is a table from the actual report from the analytical lab:

The results show that the compounds are either not detected, or that "samples exhibit very low recovery (meaning from extraction) or response (meaning detection).  The above amounts found are rough estimates at best and may not represent an accurate representation of the sample."

The analysis seems legit, certainly they are detecting amounts on the edge of nothing with no replication and using methods developed for beer and barley tea.  Is it wrong?  Can't say. Is it actual detection?  Can't say.

And in the thin method section in the FDN brochure, why is "derivitized glyphosate and its metabolite AMPA" being injected?  I thought they were testing food extracts? 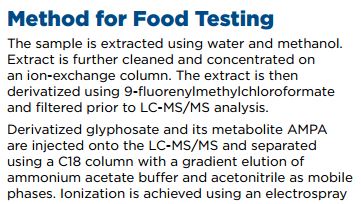 Of course, these borderline claims from single samples that could very well be noise are beyond convincing for the anti-glyphosate crowd: 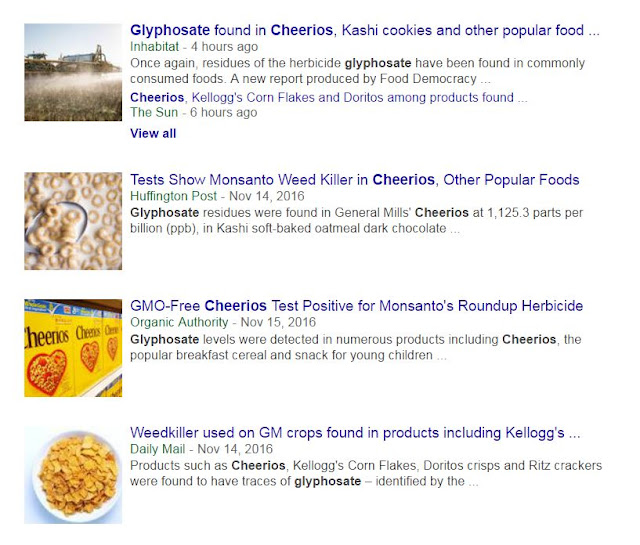 However, this report does exactly what it sets out to do, scare people and create what appears to be a legit report. It provides a slick brochure that a rabid anti-glyphosate movement was quick to snatch up and promote.  The above is from Google News.  If you don't like reality, you can manufacture it!

It is also important to note how it is being reported, as is reeks with agenda.

Important.  *** Look how it says, "Monsanto's Roundup Herbicide" and that should tell you all you need to know.  The test claims to find glyphosate.  Thousands of companies make glyphosate, an herbicide off patent since 2000.  You cannot tell the origin of the company that made it by such detection.  For them to say that with such authority is dishonest, and shows you that they are not to be trusted.

All of this shapes up to one conclusion:  A non-peer-reviewed brochure from activists claiming to detect an herbicide at levels approaching the limit of detection, from highly variable matricies (foods in this case) using an extraction and derivitization protocol for beer and tea.  The tests were not done in replicates and so we have no idea about the variation within the detection.

The reason it is not peer-reviewed is because it would not survive peer review.

But it certainly passes Food Babe review and her critical muster! 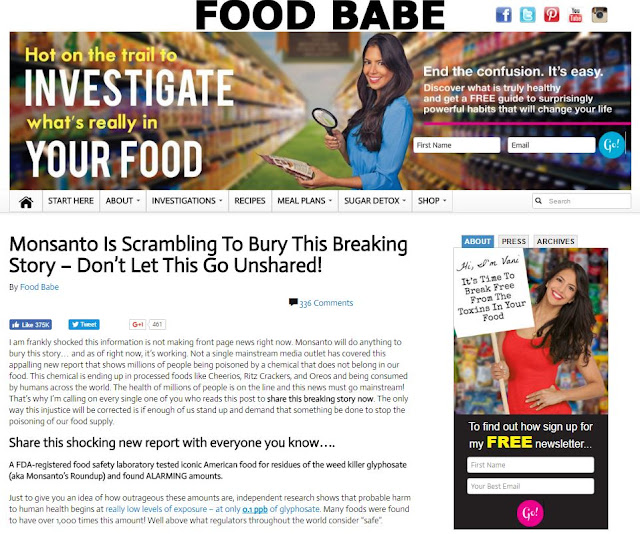 The Food Babe, Vani Hari, not only sees these results as legit, she places them into the context of a conspiracy!

So there you have it.  Activist groups are making sweeping claims from single samples that are likely just noise from an assay that is not done 100% correctly.  The company that did the analysis says the numbers are not reliable and they certainly cannot be published, the gold-standard of such claims.  But the claims are made with strong conclusions juxtaposed next to pictures of babies and other heart-wrenching pathos.  It is disgusting, dishonest, and they should not be trusted.

It would be great if these companies actually decided to take legal action.  However, it is just making cranks look like victims and legitimizes their claims.  The best strategy is to share the legitimate criticisms and let this report disappear into obscurity with the rest of the irreproducible claims of glyphosate in umbilical cords, beer, wine, breast milk and every other place they seek to find it.

Most of all, if it is not peer reviewed it does not count.

If it is peer-reviewed and never independently verified or expanded upon, it should be considered carefully.


What does it say about them to use marginal numbers, that would not be a real risk if they were true, to scare parents?  This is the hyperbole of our time, and it is wrong. 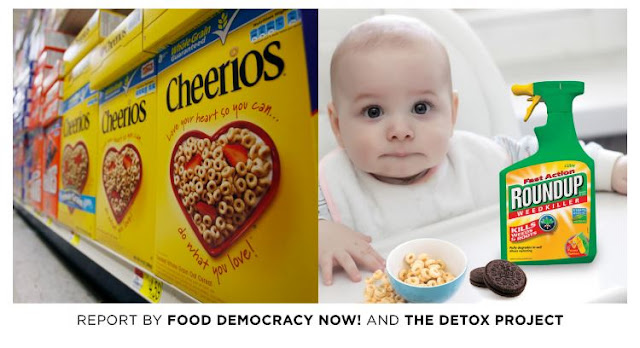