The enemies of science and reason must take unethical steps in attempts to tarnish and discredit the legitimate scientists who retard penetration of their fear mongering campaigns.

When Dr. Shelly McGuire and I correctly commented that the analysis presented was wholly insufficient to support a claim of alarm, we immediately became targets for those that manufacture risk and wish to erode trust in food, farming and science.  We were immediately chastised by those that promote pseudoscientific claims, and those paid to obfuscate science and ablate the trust of public scientists.

USRTK employee and paid content producer Carey Gillam cites article where Dr. McGuire and I were referred to as "Monsanto Supporters".  Wow. Sticks and stones...

The tactic is simple.  Play off of the popular notion that the Monsanto Company is somehow at the root of all evil, and say that scientists presenting criticism of shoddy work are just their pawns.

Anyone with a modicum of computational prowess can quickly see that both Dr. McGuire and I are public scientists, all of our funding is open and available for scrutiny.  (mine's here)

It is also clear that Dr. McGuire and I have also published work where such analytical techniques were used correctly, and we are in a position to appropriately criticize sloppy presentation of soft results.

I don't support Monsanto.  I don't un-support Monsanto. I feel the same thing for Monsanto as I do for New Balance or Pizza Hut.  It is a company where I don't use their products and recognize that many end-product users appreciate what they do. If they went away tomorrow it would have zero effect on me or my work.  I'm agnostic. They don't influence what I do or my synthesis of scientific information.

In fact, if they went away it would be wonderful because it would remove the red herring from the activist defamation strategy.

My criticism is not that of a Monsanto supporter. It is of a Science Supporter, a Truth Supporter.

And science and truth are two things Gillam, Food Democracy Now and Sustainable Pulse don't exactly have on their side.

And it shows.  After more than twelve hours online, no shares, except for one on Google Plus.

So why write about it?

Simple.  The point is to show that these activist groups resort to what they think are defamatory methods, but actually only show that they can't be trusted.  It is one big ad hominem against me and Dr. McGuire. 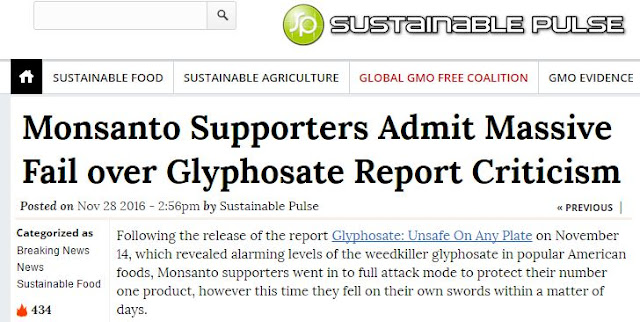 I don't support Monsanto any more than I support Chevrolet or Burger King.  I don't use their products, but certainly recognize that others do, and find value in them.

1.  Understand that these activist groups can't defend themselves with science, so they resort to ad hominem attacks against scientists.

2.  The efforts use the loose term "supporters" to attempt to connect a scientist to a company with a perception issue.

3.   The goal is to defame public scientists.  Our appropriate and measured critique of their fear campaign resonates with the public that sees them as a distraction from a responsible dialog about safe food and farming.