We Declare No Consensus!

The world's esteemed scientific organizations have made bold statements regarding the scientific consensus on transgenic crops.  The National Academies of Science, the American Medical Association, and dozens of others worldwide have all indicated that these products have an outstanding safety record and pose no more risk than conventional breeding.

But what do they know?

A paper was published last week in Environmental Sciences Europe, a Springer journal that has published some real gems, including the un-refereed republication of the 2012 lumpy rat torture study.

It boldly proclaims in the title "No scientific consensus on GMO safety". The authors represent a series of academics, activists, and NGO associates, all that hold public views against transgenic, synthetic or nano biology.

To me, consensus is something that just happens.  We don't usually measure it with tools, because we don't have to.  It is a general agreement on the state of a scientific issue.  There is consensus among scientists on climate change, gravity, evolution, and jillions of other topics, transgenic crops being one of them.

The evidence for consensus also comes from how science is discussed.  As scientists, we loves us some controversy!  Scientific meetings and the literature show many cases of ongoing discussions of one view or another about a scientific topic.   We do not see GMO safety discussions at national conferences or in the real, reproducible, high-impact scientific literature.  The papers published are one-off dead ends that nobody really cares about other than a handful of activists.

But to this list of authors, including prominent activists that make a living opposing ag biotech, they say that there is no consensus!

The Hilbeck et al. paper offers no original data, no measurement of scientist sentiment, and represents strictly an opinion shared by 15 authors.  The support for their position is built on the usual conspiratorial thinking, cherry picking, arguments ad populum and special pleading that underlies any contemporary argument against transgenic technology.

But the most fundamental flaw is that they keep repeating "no safety".  They criticize scientific reports as not demonstrating safety, when there is no scientific way to demonstrate safety.  You cannot prove that anything is safe.  You can only demonstrate, under your conditions, in one test, that there is evidence of harm.  That's it.

They start out with a few interesting statements, one is truly ironic.

Here they say two things.  First, that the statement of GMO consensus "does not exist outside of the above-depicted internal circle of stakeholders" which is composed of "fierce responses" and are "a concerted effort by genetically modified (GM) seed developers and some scientists, commentators, and journalists."

First, this is a clear consensus across scientists-- not just "genetically modified seed developers". Look at this week's Pew/AAAS survey where 88% of scientists answered that "GMO crops were safe to eat".

88% of AAAS scientists might be considered reflecting a consensus.

Next, it is amazing how few commentators and journalists follow this topic and with a generally positive message.  They tend to be science and food journalists.  I'd guess that 90% of journalists are negative on GM crops!

Quite to the opposite, those denying consensus, including authors on this paper like Hansen, Shiva and others, are absolutely stakeholders in science denial.  Their jobs depend on manufacturing risk and undue skepticism.

Then in the statement above, they say that health and environmental effects must be assessed on a case-by-case basis, which is true.   Which is what is done.  Which is why we don't need GMO labeling as a "blanket" solution.

The next paragraphs talk about how there is no consensus, that Carman's pig paper is good stuff showing harm (when it is trash to anyone objectively understanding science) and then they state that reports have shown danger when animals were fed transgenic feed and a non-transgenic counterpart.

I was curious about this, so I checked their cited sources. Here they are: 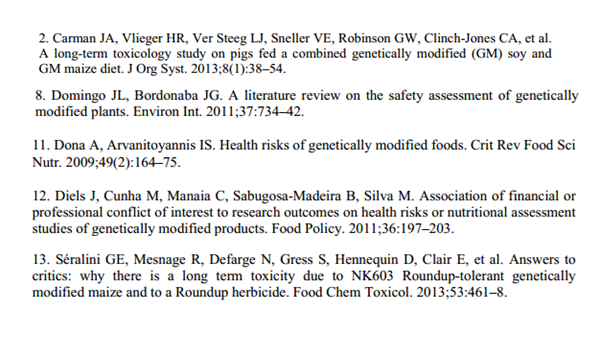 ONLY ONE OF THEM IS A PRIMARY RESEARCH STUDY!  Only one of them actually has data, and that's the one from Carman et al that makes only a few claims that can be easily disregarded based on study design.

The rest are reviews and don't show any original data from GM and non-GM equivalent diets. The authors scream "no consensus" and then convince the non-critical reader that there is support for such a position by listing papers that have no data supporting their claim.  It is a clear attempt to manipulate the reader.

The authors then claim that there are no epidemiological studies, which is entirely true.  There is no epidemiology to study.  Oops.

They cite a Royal Society of Canada report that says, " that it is ‘scientifically unjustifiable’ to presume that GM foods are safe without rigorous scientific testing and that the ‘default prediction’ for every GM food should be that the introduction of a new gene will cause ‘unanticipated changes’ in the expression of other genes, the pattern of proteins produced, and/or metabolic activities."

That is a good conservative statement that most scientists would say errs to the side of precaution, especially considering that GM crops are the least invasive of any genetic improvement approach.  The report is also 14 years old, and none of the "unanticipated changes" have actually presented themselves in reality.

The next cited report is a 2004 output from the British Medical Association.  They make some statements that again, I agree with as conservative statements about the science, including that safety cannot be completely dismissed.  I agree. That is why rigorous safety assessments are done.

They then go on to criticize the 2010 report by the EU "A Decade of EU-Funded GMO Research", which really shows that across studies of transgenic work funded there was no evidence of adverse effects.  That's what it shows.  Unfortunately the authors criticize the report for what it does not contain, complaining again about long-term feeding studies, etc.

That is a fundamental frustration of any scientific reviewer or editor. Any critic can think of the next experiments, the ones you DIDN'T DO.  It is the cheapest criticism in the book.. when the desire is to trash someone's work,  and they can't address what is done, levy the complaint that there are other things that were left out.  Of course, there are times that it is appropriate to suggest additional experiments and controls, but the scope of this compilation was to show that over 250 M euro of funded work, there was no evidence of harm, based on the experiments funded.

The authors again, rather than providing information about hard evidence of harm, go after the scientific claims that there is not anything published worth worrying about.  They primarily criticize the Biology Fortified synthesis of the GENERA database, a collection of hundreds of scholarly articles that indicates no reports showing a compelling case for transgenic-crop danger.  That's exactly true.

But the authors again criticize what's not there, stating that the information is incomplete.  Again, it is classic moving a goalpost.

They then go on to talk about Bt and herbicide resistance traits. They cite some reviews.  The original research they cite is Lang and Vojtech (2006) who fed Bt plants to swallowtail caterpillars and showed that they didn't do so well. I'd guess that would be true, but how often swallowtails visit corn is something I'd wonder about.  They also cite the Marvier meta-analysis that shows Bt corn and cotton fields have more diverse taxa than those that use conventional insecticides. That's not a bad thing.

They then make the assertion that scientists claiming safety are connected to funding from those with interests in safety.  Which is not true. If you ask any independent scientists the vast consensus accept the stance that these crops offer no more risk than those generated through conventional breeding.

The last evidence that there is no consensus is reference to the Codex Alimentarius and the Cartenenga Protocols.  They report that so many countries have signed on and that this is a reflection of a lack of consensus.  Again, an argument ad populum that does not address the fact that there are no actual reports of harm, and no plausible mechanisms to anticipate harm that cannot be easily tested.

The conclusion has several important points, mostly an argument from ignorance that "we just don't know and that science stuff is soooo confusing."  They also boldly state:

The authors are the ultimate circle of likeminded stakeholders that are as internal as you can get, a group where at least some, if not all, depend on opposing agricultural applications of biotechnology in order to keep a job and speaking tour events.  Compared to the texture of scientists across disciplines worldwide that accept the science of ag biotech- it is the ultimate example of the pot calling the kettle a dupe of Big Ag.

They then say that 300 others support the statement.  Stay hot. Again, an argument ad populum. Just because you can find 300 other knuckleheads does not make your non-existent data compelling.


The ABSOLUTE BEST part of this is the "Competing Interests" part of the paper, a place where publishers ask authors to disclose any financial or other interests that would potentially influence an author's scholarly integrity.  They state:

(hold on for a minute while I compose myself from laughing)

I don't even know how they could say this with a straight face.  Hansen works for an NGO that receives massive support from anti-GMO interests.  Vandana Shiva receives compensation for paid lectures and appearances, because she takes a stand against GM crops!

I'm following up with the publisher on this one.


To conclude, scientific consensus is something that happens, and if you have to measure it, it probably isn't there.  Scientific consensus on the safety record and utility of transgenic organisms is sound, and support an overwhelming majority of scientists that accept the position that transgenic crops pose no more risk than those derived from conventional breeding.

You can't just get a few fellow ideologs together that share a disdain for transgenic, synthetic or nanotechnology and publish a paper in a hack journal and expect the world to change its mind.

In fact, you are more likely to further awaken scientists and journalists that see invasion and exploitation of the scholarly literature for political activism as completely unacceptable.
at February 01, 2015