An Open Letter to US-RTK

To the right-wing talk show host, a scientist claiming evidence of human-induced climate change is simply running the talking points of George Soros and the anti-oil, liberal media.

To the Young Earth Creationist, scientists speaking of evolution are simply reiterating the talking points of the atheist, Darwinist movement.

To a Jenny McCarthy anti-vaccination disciple, discussion of immunology and communicable disease simply is the talking points of Big Pharma.

And it follows, that if you honestly answer questions  on agricultural biotechnology that is consistent with the peer-reviewed science, they are simply the talking points of the evil Big Ag.

I've been accused by US-RTK of using  corporate ag "talking points" and it appears to be the principle reason why my integrity is being impeached by US-RTK. I had to go to the dictionary to see how “talking points” is defined.  I figured that was a good place to start since I have been accused of using them.  The term is defined as, “in debate or discourse is a succinct statement designed to support persuasively one side taken on an issue.”

I think that definition is rather insufficient.  It should be defined as "prepared and repeatedly used arguments that substitute for actual interpretations or analysis".  That's why I don't write dictionaries.

In other words, US-RTK believes that my words are corporate words, implanted by them, in me, to do their bidding.

They don't know me very well.

The Open Letter states the rationale for US-RTK’s inquiry is that “when these (publicly funded) professors are closely coordinating with agrichemical corporations and their slick PR firms to shape the public dialogue in ways that foster private gain for corporations, or when they act as the public face for industry PR, we have the right to know what they did and how they did it."

This is where they make a massive blunder.  They assume a conspiracy, just because a scientist teachers about science.  The companies they loathe use the same science.  It does not make the science incorrect, or the scientist wrong for speaking about it.  It also does not connect the scientist to the company, other than they share a similar respect for scientific evidence.

And by the way, nobody tells me what to say, or what to think. Nobody is "coordinating" or shaping anything I say. Eff that Ess. 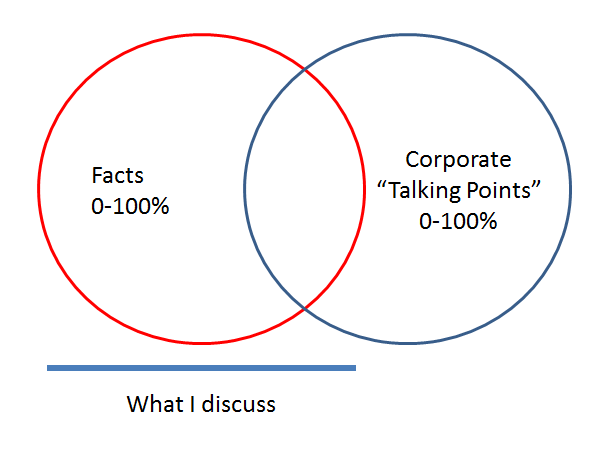 The science, is the science, and they don't like that the science is inconsistent with an anti-corporate worldview they hold.  Since their science heroes have been dismissed as frauds and quacks, that legit data in line with their beliefs has to be statistically tortured or broadly interpreted to fit their models, and real science continues to reinforce the basic concepts in transgenic crop science, their tactic is to silence the most effective voices that take the high-quality science to lay audiences.

I've never reported anything on GMOAnswers.com that is not consistent with the peer-reviewed literature. In fact, I simply talk about principles of recombinant DNA technology (the stuff I earned my Ph.D. in) and spend time debunking junk science.  That isn't "corporate talking points".  That's science and technology that I understand.

Now if I were to work for a public institution and spout information counter to established science, then I should be subject to a little more inquiry.

In US-RTK's letter to me, Gary wraps up with a quotation from James Madison. I'm not going to go dig for James Madison quotes, but I do know that he certainly noted how power, in human hands, could be easily abused.  This witch hunt is an absolute abuse of liberty, the liberty of scientists to freely discuss science.

It is fine for US-RTK, Gary Ruskin, or anyone to hate a PR company, Big Ag, heck, even hate me.  That's cool.  There have been no words spoken on their website or anywhere else that suggest that I am doing anything outside my job as a teacher and educator.  It is science.  It is not "PR".

So thanks for the open letter, steeped in conspiracy and innuendo, manufactured suspicion of a guy that works constantly, seven days a week to do good public work.  Yes, that's what I do.

I spend a few hours a week answering questions for the public on transgenic technology. Those are questions concerned people want answered honestly by someone that knows the science. Regrettably, US-RTK does not like that.

The other 100  I'm working it is for my research program, my students & postdocs, our producers, faculty, and my department.  It is all the truth, all hard science, and I'm sorry they don't accept it.

Rather than learn it, they must stop me, and anyone like me, from communicating the science they don't find acceptable.

Climate, evolution, vaccination... transgenic crop technology.  Solid science that activist groups want stopped, and it begins by attacking those that communicate it to a curious public.