When US-RTK filed the public records request on the #science14, they didn't realize they were creating a turning point in public perception.

The public is sick and tired of those that waste limited public funds to abuse important transparency mechanisms, or even hacking, to silence or harass scientists.

The public sentiment sees this as slimy, expensive, and an undue attack on their public scientists, just like ClimateGate.

For instance, two days ago there was a post on GMOInside.com's facebook page that claimed that I was "afraid" of the public records request and gave the impression that I was somehow refusing to cooperate.

I posted that I have always been 100% in compliance, and to their credit, they let my post stand.  Within a day, that post had 1000 "likes" and over 1000 supportive comments.  I have obtained screen caps of all of it from Philip Crews and others, and will immortalize that thread on this blog in the coming days. 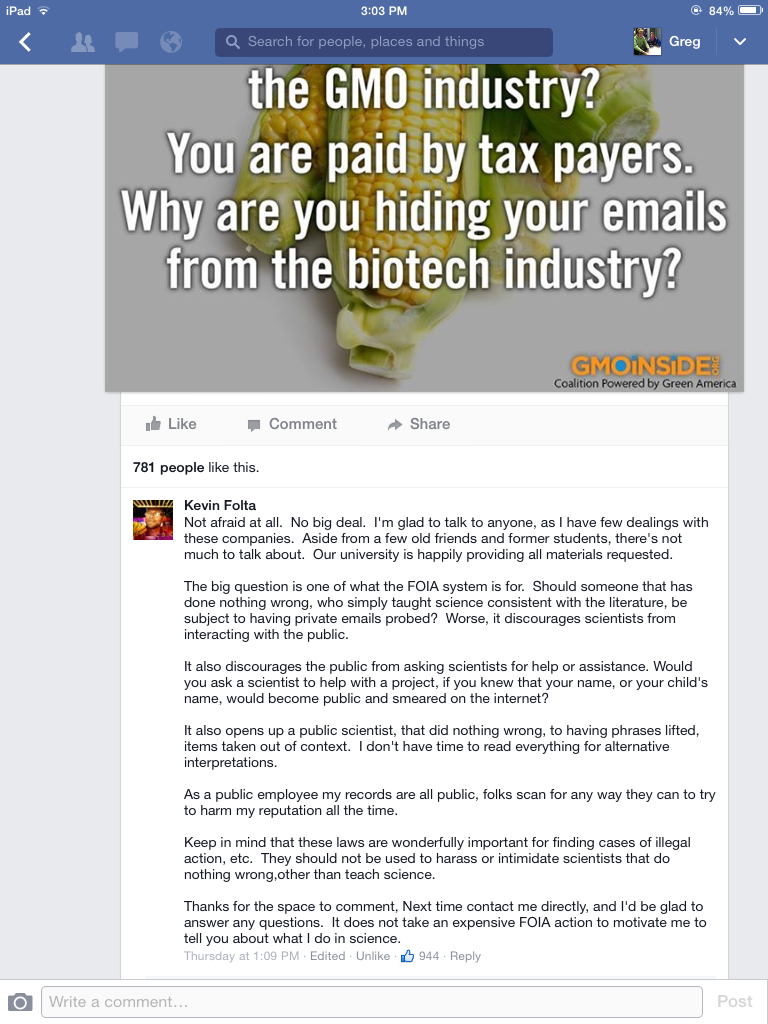 My response to their allegations of obfuscation. 944 "likes" when this was captured.  The site was eventually taken down, as their smear campaign was not shaping up the way they wanted it to.

1. Fear of litigation. I asked them to kindly cease and desist.  Their comments were defamatory and certainly libelous, as they suggest that I am hiding something and refused to comply.  That is patently false, suggests I am not following the law, and absolutely damaging, as it was shared on hundreds of other sites.  Their lawyers probably blew in their ear that they crossed a line.

(MORE LIKELY) 2.  Overwhelming Fail.  Just about every comment on that thread was supportive of me and of science.  It was amazing.  There was nobody able to defend their position that I was not in compliance, and if anything, it came across as repulsive and slimy.  This smear campaign is one that did not go their way.


YOUR Scientists need YOUR help!

Look how your involvement changed an entrenched activist website!  YOU created a turning point in this discussion.

Remember, I am YOUR scientist.  Whereas they want to paint me as a some back-pocket Monsanto lackey, I'm proud to work in public science.  I'll ALWAYS maintain relationships with these corporations and maybe someday I'll be fortunate enough to talk Monsanto into sponsoring YOUR research.

The difference between this being an isolated victory and the turning point in public perception is how public YOU help make it.  Let's face it, this attack on YOUR public scientists is wrong, and it is backfiring.

What you need to do now.

1.  Use email or Facebook to contact any magazine, paper, whatever, (especially science ones) and bring this to their attention-- a case of public scientists being interrogated and libeled for teaching science.

3.  Go to science-friendly websites and podcast websites, like Skeptics Guide to the Universe, Talk Nerdy, Radio Lab and Science Friday.  Show them how YOUR scientists, the #science14, are being harassed by an expensive nuisance public records request-- because they taught science on a science website!

I've said from the beginning, we must not let US-RTK and activists control this situation. We should not play defense.  Some researchers involved have been told to remain silent. I won't do that.

This is time for us to go on offense, as people demanding the truth,  as a scientific community, as a concerned citizenry, and as people standing up for science, reason, and THEIR scientists.