Peer-Reviewed Opinion Does Not Equal Data

The year is 2067. I'm living near a dried-up lake bed in the Northern Wisconsin Desert, popping the cork on a bottle of GMO champagne, and pouring a cool glass in the heat of another January day. It is the eve of my 100th birthday and I'm looking back at the cool stuff that science has done.  The most exciting changes were the way that technology was used to change medicine and food. Medicine integrated comprehensive genomic and gene expression data in treatment, and in farming, all tools were now integrated into producing food for a growing world population.

We had come a long way, especially from the days when starvation and deficiency once claimed many lives, way back in the decade known as the "Denial Teens". It was the time when the Communicable Disease Plagues began, when political leaders ignored warnings of carbon emission, and a time when the most modern and precise genetic improvement techniques were demonized as poison by a small group of well-fed, vocal activists.

Today in 2067 everyone is eating food changed by moving around a gene or two, nobody is lumpy like a bag of volleyballs and 1 of 2 kids does not have autism. The folks that made those claims have been room temperature for a long time, but everyone points at them as criminals against humanity, as their efforts delayed the development of useful technologies to feed others.

In thinking about my little teeny-tiny sliver of contributions to science, the there were two key contributions.  My lab's work was good, we published a lot, but never had the big breakthroughs that changed things much.

One of the biggest achievements was training fifty Ph.D. scientists, fifty postdocs and close to a thousand undergrads.

The other satisfying achievment was my time spent pushing back against science denial, helping communicate the reality of science to the public.  That time was important because it probably helped bring forward the acceptance of the best methods of genetic improvement of crop plants, maybe just a little.

But there were many hurdles. One of them dated probably back to early 2015.  It was a day when a number of academics and activists sworn against biotech crops published an opinion that was accepted as fact.  A now-long-defunct journal, Environmental Sciences Europe, published an opinion piece.  No data presented, no surveys, statistics. It claimed boldly, "No Consensus of GMO Safety".

The soft yellow journalism of the (completely free, the good ol' days) internet paraded this report as scientific fact, as a reflection of a "no consensus".  Consensus is the agreement within a field of inquiry, and certainly there was scientific consensus on the safety of transgenic crops back in the mid-Denial Teens.  Every major professional scientific organization stated it, and there was no controversy in scientific conferences or in the literature.

The only controversy was spawned by those that profited from it-- a handful of well-paid national speakers, folks profiting from books and movies, others with anti-corporate agendas, and those raking in a fortune from selling this really expensive stuff we called "organic" food.

There was one event in particular that I remember as a scientist.  It was somewhere back around Ground Hog's Day in 2015 or so.  A peer-reviewed journal actually allowed a group of activists and academics to publish their opinion, that there was no consensus. Some of the activist authors, whose livelihoods were tied to standing against transgenic technology, did not even report their conflicts of interest in the work.

Of course, mainstream science rolled its eyes and pushed on with reality. There were problems to solve.

But the manufactured science was picked up by sources that fed the credulous, peddlers of misinformation and propaganda common in that day.  Here's an example of some of the things we read: 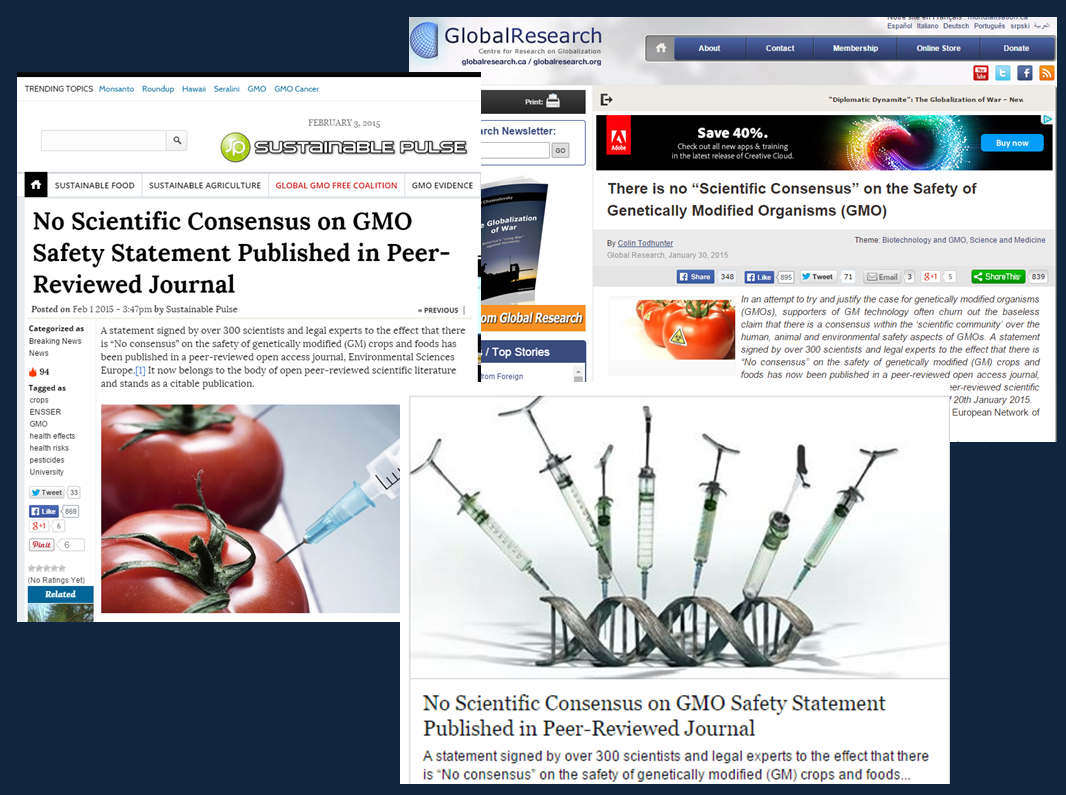 A team of food terrorists hijacks the peer-review system, giving the activist media the validation of its errant worldview that it can't get from actual science.

The article did a lot to remind us about the frailty of the scholarly literature and how it was being manipulated for political gains.

The article helped heighten awareness of how scientists need to be involved in allowing academic freedom, but having a tight grip on the rigor that is required for scientific publication.  Opinions are not data  yet they have the potential to shape public opinion by brandishing the patina of legitimate research.

The scholarly literature is being used as a propaganda tool.  We now have tabloid science.

The article was later cited by hundreds of other similarly-biased papers and authors, as it was bestowed with a title, journal name, volume and page number, just like any other legitimate science work.   Few realized that this was opinion, without data.  It was treated as primary research.

It was one of many examples of efforts from that era that kept the public in the dark.  It was selfish, anti-corporate activism that put personal gain and ideology ahead of science that could help the needy, the farmer, the environment, and the consumer.

It also was clear that the 99% of farmers and scientists, those that actually knew the science, sat on their hands way too long and didn't push back soon enough.  They allowed vast minority opinions to steal space in the scholarly literature, which was then parlayed into lying to a public that wanted to hear the message.

Looking back from 2067, the planet was a different place in 2000-2020.  Those with plenty of calories and comfort fought to keep pulling carbon out of the earth and others fought to squelch effective types of genetic crop improvement.  Time would tell that they were wrong, and millions of the most vulnerable died due to non-action, when we could have acted.

If only a few more scientists, farmers and consumers would have gotten upset, and then active in promoting real science back in the mid-teens, perhaps more people would have realized its benefits sooner.

That's it for tonight. I'll celebrate 100 years by going to the lab in the morning.  Students to train, papers to write, and a visit to a 3rd grade class to talk about what the world was like in 2015, back when people rejected science.