Who Are the Real Shills?

I hear it almost every single day.  Because I talk or write about science, and promote ideas consistent with the scientific literature, I must be somehow receiving compensation to share such views.  After all, what kind of sick bastard would spend their personal time communicating facts to the public?  There must be something hidden!

These are the brilliant speculations that fuel the #Science14 public records request, the endless accusations of being a Monsanto lackey, and the distrust in scientists in general.  If we are talking about cool scientific ideas, then there must be some secret money trail encouraging that discussion.

It is one of the most small-minded assertions I've ever heard, but coming from small minds it makes perfect sense.  There are a lot of people making big bucks by promoting bad ideas. They have been doing it for centuries.  Swindles are financially lucrative, because "there's a sucker born every minute", and many modern-day charlatans are cashing in on building fear and/or exploiting the credulous.

It is the muck where Food Babes and Health Rangers are spawned.

This discussion prompted me to think about the question, "What is a shill, and how would I know if I am one?"  For the purposes of this discussion we'll go with the idea that a "shill" is a "paid shill" someone receiving compensation for perpetuating false ideas.

There are fundamentally two criteria.

1. You must espouse a position that is not consistent with evidence.  Either out of ignorance, self-deception or knowingly false statements, claims are made. Claims continue to be supported after correction from sources with authority.

2.  Compensation is received to make the claim. Some sort of compensation, financial, career motivation, etc is provided in direct exchange for the statements made.

Who are the real paid shills?

This table sums it up pretty well! 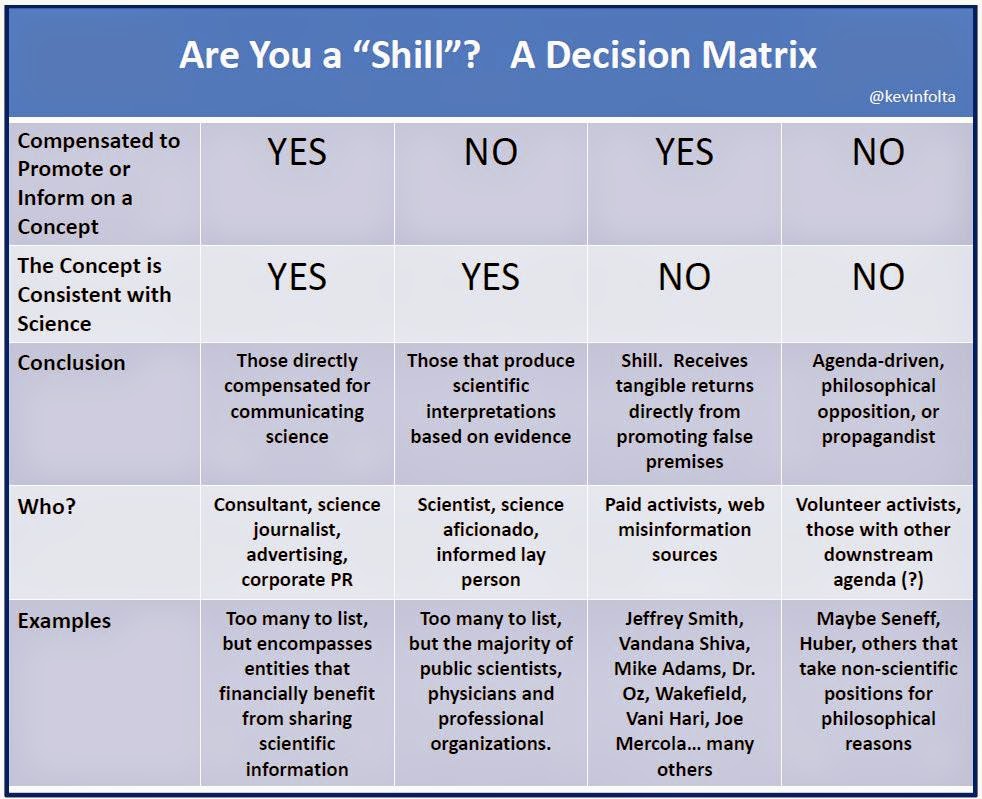 Who really benefits from the perpetuation of false ideas? As they say, "Follow the money!"

The table above spells it out pretty clearly.  There are many that promote scientific ideas and are well compensated to do so. These are the folks in companies, PR firms, advertisers, and others that make a living promoting scientific ideas-- especially if their efforts benefit a company or themselves.

The second column are those that promote science and evidence strictly because it is the right thing to do.  These are scientists, volunteer science communicators, teachers, physicians, and their national organizations. The science shared is not source-dependent, as it changes based typically on evidence emerging in the peer-reviewed literature.

The third column are the people that make a living selling information that is inconsistent with the scientific consensus, generating false or wild claims that result in increased visibility and financial gain.  Many of these folks promulgate bad information for a living-- it is what pays the bills.

The fourth column is the most curious.  These are people, mostly professionals, that for some reason have adopted non-scientific reasoning and perhaps have a personal agenda or other motivation to espouse a non-scientific viewpoint.

So who is the real shill?

Column three! -- and these are the all stars of the anti-vaccination, anti-climate, and anti-GMO movements.  They get rich off of selling bad ideas.

It reminds us of how the internet just aids in the dispersal of modern day snake oil, perpetuating bad information to the gullible for substantial financial gains.  Those are the shills-- those that enthusiastically promote a false idea for serious financial gain.