The recent flap on glyphosate has been fun to watch.  It is an ag chemical that is used on some transgenic crops that contain a gene allowing them to grow through herbicide treatment, where weeds die. This technology has been extremely helpful for farmers.

Because the folks opposed to ag biotech have had zero luck tying the process of gene transfer or the genes themselves to any health issues, they have retreated to hammering glyphosate.  After all, it is the chemical that makes the trait valuable. Plus it kills weed pests, so it can be lumped in with the ever-evil pesticides.

Plus, herbicides by definition kill herbs, and herbs cure every disease in the world, ever. Big pharma just won't let that happen.

Therefore, glyphosate has become the new popular target for the anti-GMO movement.

Of course, nobody points out that glyphosate is used extensively in non-GMO applications, such as a harvest aid in grains, clearing rows of weeds in tree-crop orchards, or heavy use by municipalities.  It is safe, cheap and works well.

They also fail to point out that there is none, or next to none, on food.  It is sprayed on GM crops weeks before they flower, and most of it is long-gone by the time plant parts used as food are harvested.  Oops. 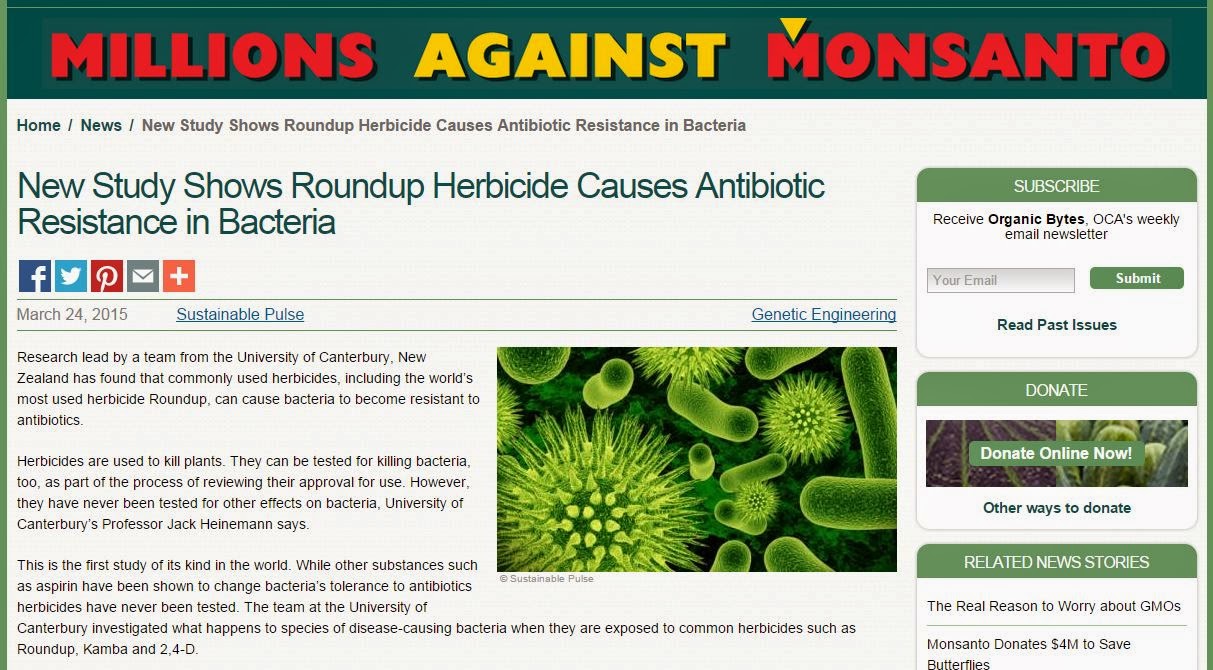 "Roundup Herbicide" is a deadly poison that kills .... wait, what's this?  It makes bacteria survive better?


But let's play along.  Computer scientist Stephanie Seneff claims that it is responsible for half of autism cases. Web quack Joe Mercola claims that glyphosate causes celiac disease.  Retired scientist and hobby micro-cryptozoologist Dr. Don M. Huber says it pretty much causes everything else, including cancer, morgellian's, fibromyalgia, Alzheimer's, Parkinson's, and a list of a dozen other diseases.

When pressed, none of these experts have a clue about how it works to cause the problems they claim. In science, disease-causing agents have well-defined mechanisms of action, in other words, when something causes a problem, we learn exactly how it causes the problem.

Despite the claims of glyphosate-related ills, nobody can demonstrate any hard connection to the diseases in question. However, these folks boldly assert, without data, that clearly it is because glyphosate interferes with the microbiome, at least that's the conclusion drawn by Samsel and Seneff (2013), without doing any actual experiments to support that conclusion. 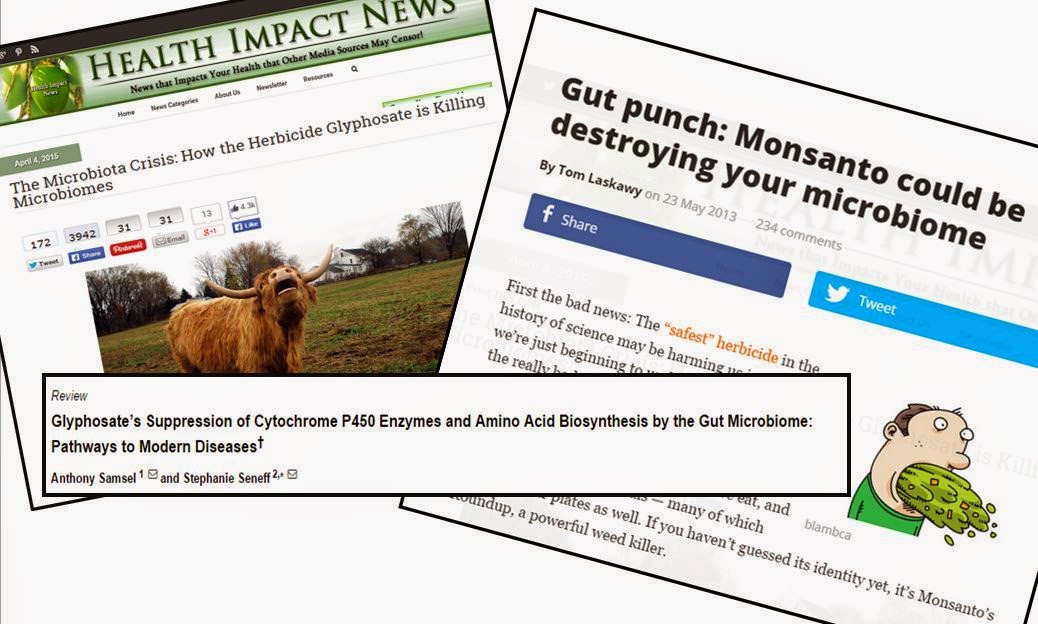 So the chemical you don't really consume causes all these human ailments by destroying internal microbes.


So what does the new paper by Kurenbach et al, 2015 really say?  Glyphosate not only doesn't kill bacteria, it actually helps them survive.

The group tested several bacterial strains for their response to antibiotics, in the presence of several weed control chemicals, including glyphosate. In short, when you grow cells in weed killers, they survive antibiotics better.

Statistically meaningful differences in sensitivity were observed in many cases, as in the presence of weed control chemicals they survived ampicillin, tetracycline, chloramphenicol, ciprofloxafin or kanamycin treatments better.

The authors then test the mechanism, which is a great next step. They hypothesize that the herbicides might increase the expression of an efflux pump, a kind of molecule that actively removes compounds from the cell.  Cells have mechanisms like to this to sequester and remove toxic compounds. Efflux pumps give oncologists fits, because they pump out chemotherapeutic chemicals.

The authors use two indirect methods to test the efflux pump hypothesis, first showing that the promoter of the gene (the gene's on/off switch and volume knob) is activated by the herbicide.  This shows that the first step in production of the efflux carrier is active. The second test uses a chemical inhibitor of the pump to test if it changes the sensitivity to some of the compounds.

The results are consistent with the hypothesis that herbicides activate mechanisms that facilitate removal of compounds like herbicides or antibiotics from the cell.

The work seems technically solid and there's no real question there.

The problem comes in how the authors chose to frame these data in the context of antibiotic resistance and its relationship to herbicides. This is where their agenda starts to show.

If I was asked to review the work I would have noted the good experiments and statistical treatment.  However, I would have suggested that statements like:

"The magnitude of the induced response may undermine antibiotic therapy and substantially increase the probability of spontaneous mutation to higher levels of resistance. The combination of high use of both herbicides and antibiotics in proximity to farm animals and important insects, such as honeybees, might also compromise their therapeutic effects and drive greater use of antibiotics."

be a little toned down. Clearly they include the "honeybee" pathos (where I'm not sure how much antibiotic is used in bee hives, maybe there is).  At best, it is tempting to speculate that there could be enhanced resistance, but the herbicide levels tested are not likely to be encountered on food.  Even amounts used in the commercial formulations would have be directly in bacterial contact to make these experimental concentrations relevant.

For instance, the glyphosate concentrations used are 31 times higher than the maximum amount allowed as food residue, and even those maximum residual levels are rarely encountered.

The paper gets high marks for its methods, but the relevance to clinical antibiotic therapies is a stretch.

Most of all, it shows that these chemicals have little effect, or minimal effect on bacterial growth at reasonably high levels.  This conclusion contrasts greatly with the conclusions of Seneff, Smith and others that claim the tiny amounts that might be present on foods derived from glyphosate-treated crops have profound effects on intestinal bacterial populations, and directly underlie human disease.

This is a case where some good data are over-interpreted to support a conclusion, and that's a science no-no.  Stronger reviewers and a more rigorous editor would have asked the authors to adjust the language to fit the data, and fit the relevance to the concentrations used and where they may be encountered in food.

Other than that, another good in-vitro study that has marginal direct relevance to antibiotic resistance.  It does frame a compelling hypothesis, and now we'll see if the authors follow up and expand these findings to actual biological circumstances, or if this one ends up as another one-off lab study with no relevance to the reaching speculation it makes.