The Value of the Farmer's Voice

U.S. farmers make up approximately 1.5% of the population. They are the most credible source of information about production details, the inputs used, and the challenges faced.  However, they are not active in social media.

Of course, there are notable exceptions, one featured here today.

On the other hand there is Moms Across America, a group of anti-farmer, anti-vaccination, anti-biotech affluent Californians that have a strong social media presence.  They don't know about farms and farming, yet they write about how detrimental farming is, they certainly don't like the major seed companies, and they even promote false or flimsy data.

So Kansas farmer Mary Mertz reached out.  The following note was re-posted in the Food and Farm Discussion Lab on Facebook, after its original post was posted as a comment on the MAA site. 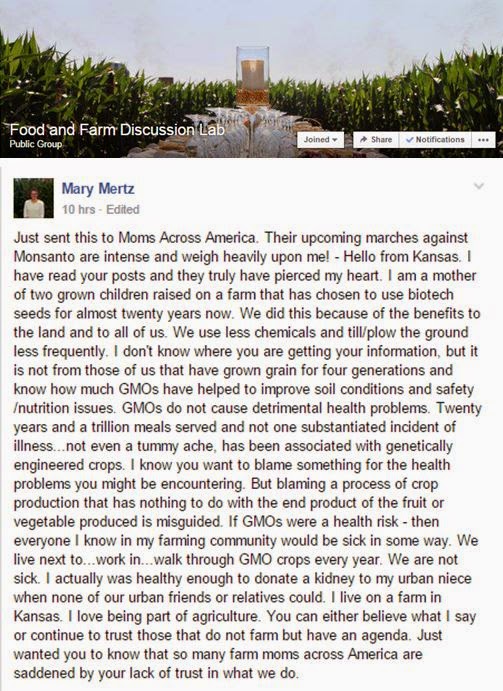 Mary Mertz reaches out to Moms Across America.  Her heartfelt honesty is what is needed to build trust with the average consumer.

This is a textbook example of how to make progress in this area.
Farmers hold a huge amount of power in this discussion and are among the least likely to use it.  Their increasing participation can influence the hearts and minds of the people in the middle, those that do not have firm understanding, and the people that typically capitulate to the fear and lies promulgated by MAA and their cohorts.

The American farmer will be the most impacted by bad public policy that restricts traited seeds, targets the products from them, or limits safe chemicals used for their production.  Farmers have the most to lose- yet the most power to influence the situation. It is great to see them reaching out more and more to a public that needs to understand where food comes from.