Science as a "Marketing Arm" of Big Ag

The most hilarious part about US-RTK is that they are so clueless on science that they'll actually print the stuff like you find here.  Go ahead and read it.  After you compose yourself from laughing, come back and continue reading.

Their claim is that the GMO Answers website is a PR tool.  I suppose at some level it is, as the technology, traits, seeds and users of agricultural biotech have been defamed and smeared by activists for two decades without a whole lot of push back.  Here the science is related to the public, which I guess defines public relations.

However, Truth does not need "PR"-- it just needs to be communicated effectively.

That is what GMOAnswers.com does.

For almost twenty years the non-scientific arguments, blatant untruths, and half-cocked evidence were allowed to tarnish the reputation of technology that has performed safely and effectively.  These efforts have led to calls for horribly-conceived, non-scientific and expensive changes in public policy (like labeling). The worst part is that new technologies that can help the farmer, the consumer, the needy and the environment are slow to develop.

The organizations that fund GMOAnswers are tied to the ag biotech companies, so the unsophisticated thinker will automatically assume that the companies dictate what information is presented.

But this is the difference between science and non-science. In the world of anti-biotech activism you can make up stats, skew numbers, conflate false parameters and generate false associations in the interest of fooling a reader.  That's common practice.

If I read anything on GMO Answers.com that was not true, I would tell them, not ask them, to correct it.  Period.  If they failed to do it, they would be the subject of a very pointy blog here at Illumination, and widespread criticism from the broader scientific community.

So let's analyze the conspiratorial and paranoid USRTK rant.  Once again, they go after public scientists and promote nonsense, the old formula to keep the supporters happy and the cash flowing.

Ironically, they get funding based on their support for non-scientific ideas, whereas the independent experts they criticize get nothing (except hassles). 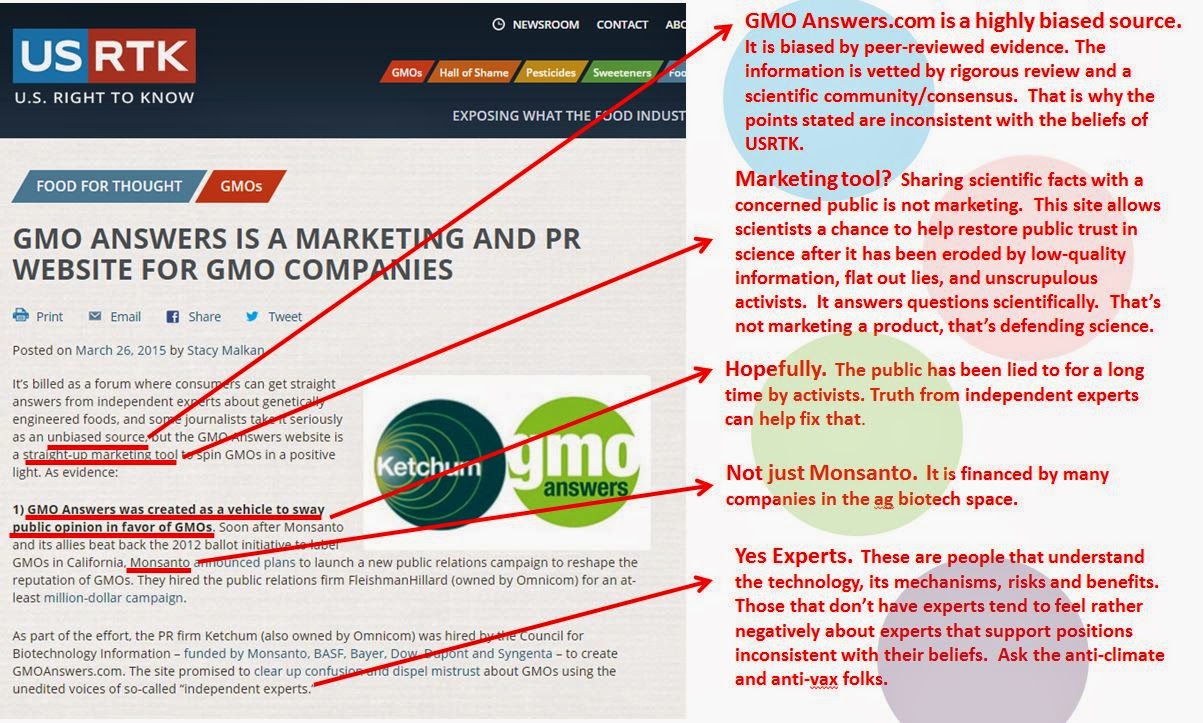 Click to enlargenate.  The thesis- activists like USRTK are not exactly happy that scientists have a place to speak the truth, and to share science with a curious public. It is sad to see them go after a resource that connects independent scientists with people that want answers. 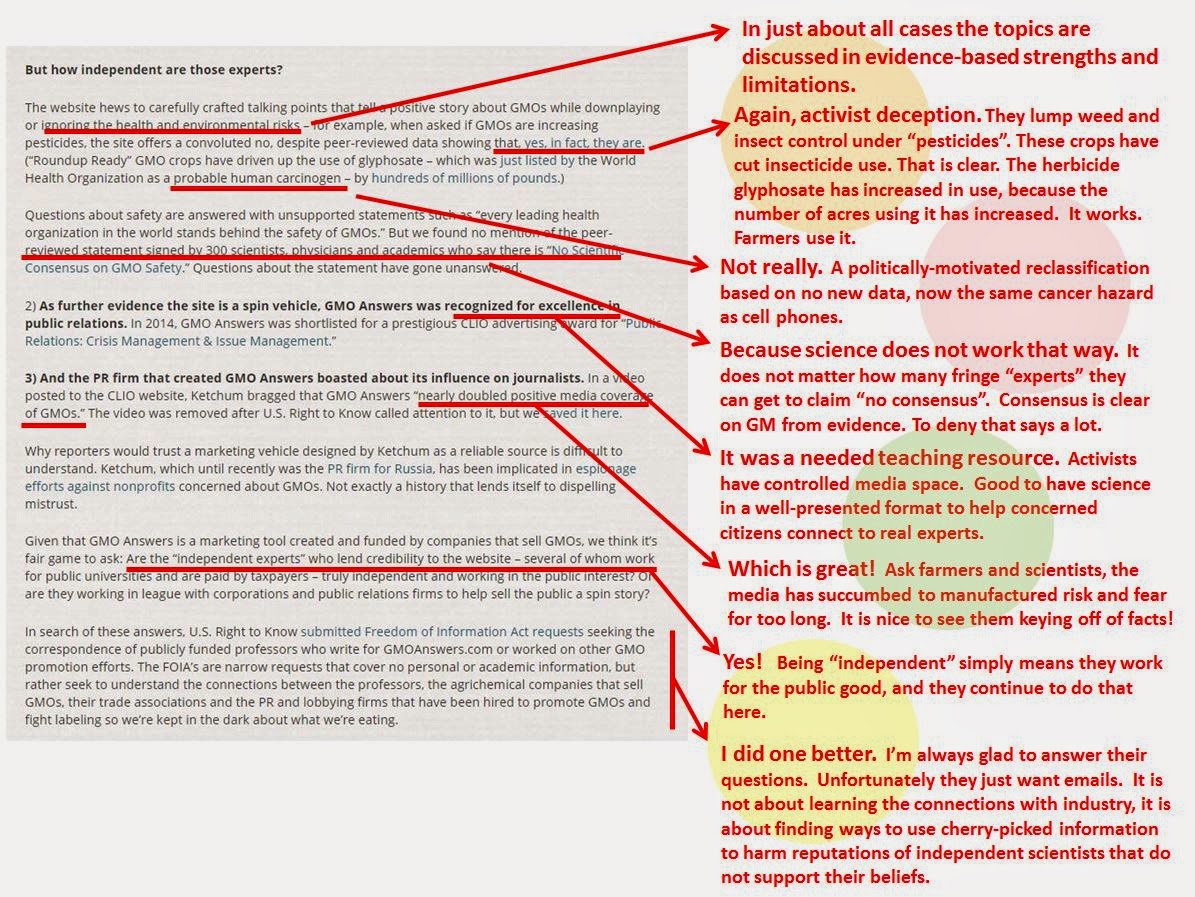 Click to embiggen.  This part shows a lot of the careful deceptive wording and reliance on low-quality "science", as well as their desire to discredit truly independent public scientists (like me!)

Perhaps my favorite comment by Stacy Malkan is that GMO Answers.com does not address the "peer-reviewed statement" that 300 scientists claim "no consensus".   I hope they do eventually, heck, I might even ask the question on GMO Answers.

First, they are still about 2,000 behind the Creationists that state there is no consensus on evolution, and waaaaay behind the climate change folks that say there's no evidence of global warming.

Just because two reviewers for a journal known to publish soft work print an opinion (the article cited presents no new data), does not make it scientifically valid.

*****
To the casual reader or person concerned about ag biotech, there is one way to correctly interpret the USRTK claims:

GMOAnswers is an effective portal to obtain hard scientific information about the topic, a lot of it coming from independent experts.  This kind of information drops their stock.  As more people learn the science, and develop disgust for heavy-handed activist tactics, their credibility and influence continues to drop toward irrelevance.

The avalanche of irony is that here is an organization getting paid to distort science, which is exactly what they accuse others of doing.  How can you sort it out?  Start with the hard science and compare it to what is presented at USRTK and GMO Answers. One of them isn't being exactly truthful.