I enjoy a spirited discussion.  But how do you do that with a robot?

What if the robot is doing the dirty work of a corrupt activist organization and you are the topic du jour?

As a 30-year public scientist I’ve enjoyed educating the public on the science of genetic engineering. That raises the ire of those sworn against the technology. As their arguments continue to crumble and time shows that they have been deceiving the public for decades, their numbers thin. So now they have employed robots for scientific slander.

Such is the case over on Twitter, where an account named @NoGMOVerified spews vitriol, seemingly pulling stories from a substantial archive and pumping them into tweet space. The majority of their messages are just the usual drivel, but it gets personal. 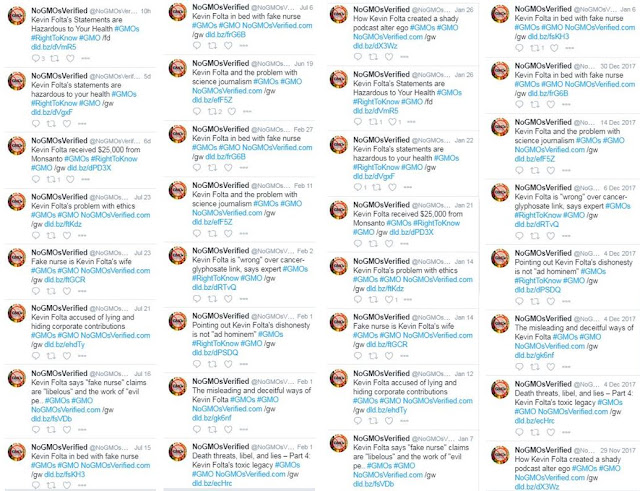 This account exists solely to spread false information, including a daily dose of smear about Yours Truly.

Is it ethical for Twitter to allow continued, targeted harassment?   I've reported the "user" bot and no response.

This is what the corrupt anti-GMO movement has become. When you can't discuss issues attack the person.  When you realize your personal ship is sinking because of attacks against people, send a slanderous algorithm to do the dirty work.

The bigger question is, if you consider yourself part of the anti-GMO movement, is this something you endorse?  Are you proud of the people (and robots) that represent you in this asymmetrical dialog?

Is sending a libel-bot into a scholarly discourse simply waving a white flag?
at August 06, 2018