Just because an organization creates a report does not mean the report should be considered seriously.  In fact, it should be reviewed with a keen eye and great skepticism.

This is not a blog about glyphosate, the active ingredient in herbicides (including "Roundup" for example).   It is a blog about how fear mongers work, and strive to harm trust in perfectly good food. It is about Food Terrorism.

I wrote about this in my Foreword to the book The Fear Babe. While many object to the use of the word terrorism, it is a perfect moniker for what is happening around us.   Terrorism is defined as coercion or intimidation to achieve political or ideological gains.

This is exactly what the Environmental Working Group (EWG) is doing.  Again.  Deliberately deceiving the public to advance their agenda.

The timing was perfectly coordinated to fit with the widely-publicized jury verdict in California.

The EWG claims to have found the herbicide glyphosate in commercial oatmeal brands, including organic ones. But here’s the problem. It is very easy to detect extremely small and insignificant levels of chemistry. That’s exactly what they found.

EWG makes up its own standards, which are 14,000 times lower than the EPA's and extremely lower than any other regulatory body.   The levels detected were not high — they actually were well within safety limits. You’d have to eat 30-some bowls of oatmeal a day, every day, in order to achieve some level of realistic risk.

And the media fell for it. 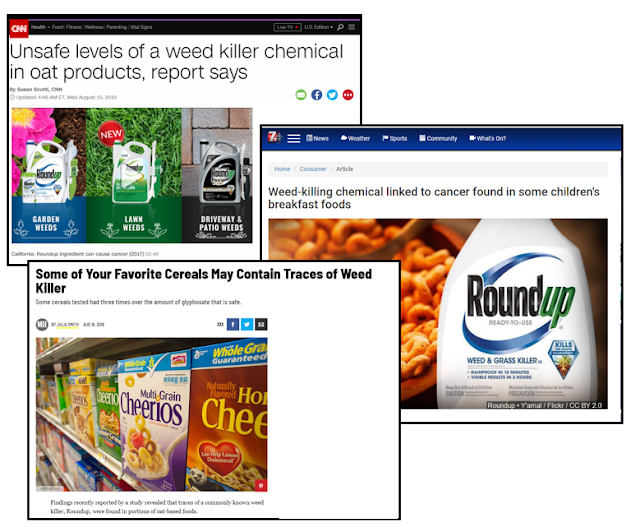 The good news is that within a day dozens of critical analyses were published that detailed the EWG's motivated distortion.  Really nice pieces detail what the numbers really mean and how they truly relate to risk.  Here are some good examples:  1 2 3

But the damage has been done.  Moms everywhere are dumping oatmeal down the garbage disposal and shaking a fist at farmers everywhere. Those greedy bastards just take tremendous personal financial risk to safely feed the rest of us.  The nerve.

The poor Quaker Oats dude will likely make quite a showing on garbage day, and oatmeal, a safe food with some potential collateral health benefits, is now off the shopping list.

Why Trust the Environmental Working Group?

This is the real question.  Why do news outlets, consumers and Whole Foods shoppers hang on their words?  Greenwashing.  EWG has "environmental" right in the name. How bad can they be?

While sounding like a benevolent organization out to protect the environment, they actually spend a lot of time fighting against farming, particularly with respect to chemistries that are used to safely protect crops.  Yes, these are the Dirty Dozen folks, the people that scare families away from fresh fruits and veggies.

Plus, it is not a published report!  EWG does not publish its work in peer-reviewed journals.  Because they can't.  Wild extrapolations, tortured math, lousy statistics and deliberate misinterpretation are their currency and would never survive critical evaluation at a reputable journal.

I'm perplexed.  When independent scientists or journalists step into a public discussion and cover science honestly they are accused of being agents of corporate conspiracy.  When NGOs tap corporate coffers to deceive the public about food and farming, they are considered heroes.

And they are very happy to scare the public to death to achieve their agenda.