This blog post is a revision of a yesterday's that you can read here.

At the time I was amazingly disappointed, betrayed and angry.  It provoked an overly emotional response that I don't like in retrospect.  I leave it here in the interest of transparency.

Today's article on Biofortified makes a number of false claims, and they have made a tremendous mistake.

They made a very public admonishment of me and alleged conflicts of interest that they construe as  ethical misconduct.  However, a simple analysis of the facts provides a very different view.

Here are the facts:

1.  In May of 2017 a law firm contacted me and asked about my willingness to analyze some data as a "Subject Matter Expert". It fit perfectly into my area of expertise, but was not work consistent with my appointment at the University of Florida, and I would be compensated for my time.

2.  Because it was not university work, I filled out the forms for outside work.  There was no check box for the nature of the work I was planning to do (as a subject matter expert),  so I checked "consultant". It was not professional witness work as it was not for a trial.  In an attached letter I would clarify the nature of the work with my university administrators in a letter (that Biofortified also has) that says explicitly that the work was not consulting.

I explain it this way:  The ballistics expert that matches the bullet to the crime scene and presents his data in court is not a consultant for Smith and Wesson.

While Karl and Anastasia had clarifying documents, they decided not to show them.  They also never reached out in a meaningful way to have a reasonable discusison.


3.  Under my retention agreement with the law firm, the work was to remain confidential.  I could not discuss the nature of the work, the parties involved, or the type of analysis.  I was a subject matter expert, providing analysis toward an outcome.  This was analysis of public university data within my expertise. A dozen experts or so were sorting out a private matter.

4.  I inquired with my Associate Dean that handles outside work.  She was glad to provide some guidance and how to be in compliance.  I followed her direction.  Thes fact that I was working as a paid expert for a law firm was clearly presented on my website. 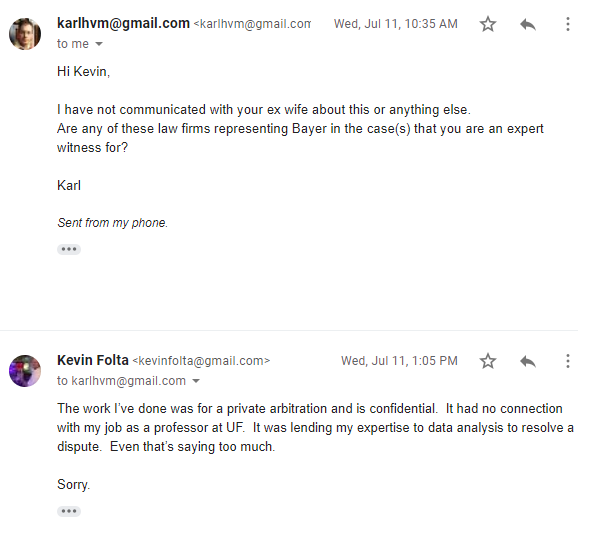 The work I did was bound by confidentiality.  I will not breach that agreement.


6.  Karl and/or Anastasia obtained university documents (ANONYMOUSLY) from the University of Florida via a Public Records Request that we happily filled.

7.  Instead of picking up a phone and asking questions, they interpreted the situation based literally off of the documents-- which were drawn up before I even understood the nature of the work.  This is a dangerous space for misinterpretation.

8. They have posted internal documents between me and my superiors that describe what I think the work will be.  Unfortunately I didn't always know ahead of time what I'd be doing, and just provided the best guess information.  My superiors need to know what kind of work I am doing generally to grant my request for outside work.

No information was provided because I had a contract that said the nature of the work, the parties involved and the outcomes would remain confidential.  This was a private matter, not in courts, not in the public.

10.  There are only a handful of people that know what I interpreted from the data and if they favored one party or another. It does not matter.  I just objectively analyzed the data and gave my report.


Why is Biofortified Hostile?

Beats me.  My guess is that this is a tie-in with MAMyths and their buddy Kavin Senapathy, who was quick to jump in on this story.  She's been especially hostile toward me lately in social media, and the folks at Biofortified are probably happy to throw me under the bus and get credit for the next big reveal in Folta's lack of transparency.  That's my best guess.

It is especially surprising because I always have promoted Karl and Anastasia.  I'd offer them opportunities when I was too busy,  I'd write letters of recommendation, and help promote their careers. I appreciated Biofortified, and actually liked it more before I had anything to do with it.

We have had collegial yet pointy exchanges about the fate of the doomed GMO Corn Experiment and the lack of progress.  I find this unacceptable, as we took money form a crowd sourced effort and owe something.  It should have been done two years ago.  Maybe this sparked their retaliation. 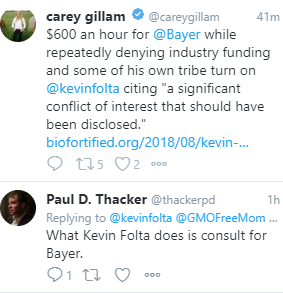 And then they celebrate.