August 24, 2018
I've written a lot about public records requests, which ultimately are a good thing and ensure transparency in public servants.  However, I do believe that the current rules far overstep their original spirit, and the process is massively abused at massive taxpayer expense-- with the intention of harassing and harming public employees.

When you have access to all of someone's email, you can cherry pick the message you'd like to tell.  The internet loves sensationalism and scandal, and is not so excited about the boring realities.

Over the last month my institution has produced about 50 MB of my email and other docs as PDFs.  It is a substantial number of pages, most of it going to author and documentarian Jeffrey Smith.

But there have been anonymous requests as well.  Yes, you do not even need to say who you are or what you seek to peek voyeuristically into the private conversations of academic professors that just want teach and do research.  Transparency is a one-way street.

This week some docs went out to someone "seeking any documents related to any harassment cases involving Dr. Kevin Folta at the University of Florida, including complaints and investigative materials." 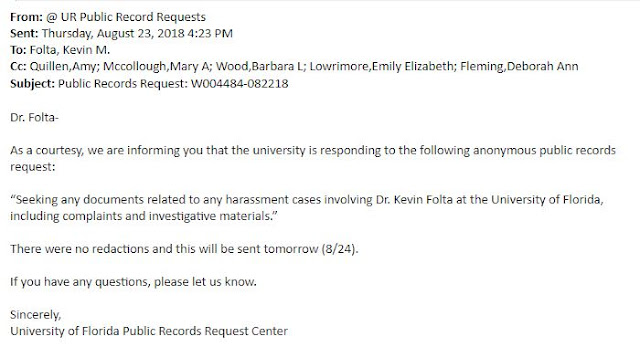 More requests for public records. The latest come from anonymous inquiries, which I have a hunch are folks in the SciComm community.

They'll get two documents about harassment. However, I was the one being harassed, in one case by someone that stated "that he wanted to kill Kevin Folta."  This ended up as a police report by the university that I didn't even see until yesterday.

Who is the Anonymous Requester?

It is no secret that some in the science communication community have been quick to side with and propagate false information and allegations from folks like GM Watch.  They've distributed materials in the interest of harming me personally and professionally.

But these same folks never ask me for thoughts or clarifications.  They have their story and stick to it.

It is very disappointing.  They don't talk to me, they just distribute negative information from activist websites, turn me in at conferences for violating the Code of Conduct (which the conference found baseless), and now make anonymous requests because they are afraid to be exposed as the gutless backstabbers they truly are.

The good news is that it is easy to figure out who they are, and chances are they reveal themselves very soon in their scathing misinterpretation of materials gathered.  I welcome that.

It is amazing that in the process of transparency these folks wish to remain hidden.  It says a lot about their motivations and character, as they take on the same damaging tactics as the most deplorable activist groups.

My recommendation is that they carefully fact check before misinterpreting emails and cryptic internal documents.  It will be career suicide if they don't.  This will be interesting to watch.