Revision of history is a dangerous game, especially when you denounce the intellectual and material contributions of others-- like they never even happened.

I have been advised that I no longer am involved in a project associated with Biofortified (Biology Fortified Inc.)-- the now mummified GMO Corn Project.  Karl Haro von Mogel and Anastasia Bodnar's unilateral action is not only disappointing, it calls into question their ethics and trustworthiness, as it was their glacial pace that has dragged this simple project out for almost three years.

Yesterday they outed my confidential, non-work participation as a subject matter expert in a private arbitration. I was retained by a law firm to provide my insights and analyze some old data in an ancient matter.  My participation as a compensated expert in outside work with a law firm is clearly delineated on my website, to the extent that I can provide details under my confidentiality agreement.

Karl and Anastasia decided it was their job to blow my confidentiality using public records law and then call my commitment to the confidential nature of a private matter "non-transparency".  Shame.

I was also expunged from an Experiment.com project yesterday.  Here's the story:

In the Summer of 2015, yes almost three years ago, Karl Haro Von Mogel and I developed a concept for Experiment.com, a chance to formally test the frequent and tired claim that squirrels, rats, and other varmints would not eat GE corn.  We'd do it as a fun Citizen Science experiment.

We exchanged dozens of emails and sat through meetings, talked about Materials Transfer Agreements and what the right experimental design might be.  We spent a lot of time in conception and roll out.

The experiment went live in November of 2015.  I promoted the work, sought donation, and we were surprised to see the project fully funded in fewer than 24 hours.

Then and now.  Overnight my contributions to a project vanish. This is a serious ethical breach.

Over the next weeks Karl worked extremely hard to manage the kits, mail them, etc.  By far he did a the most work on the project, as prepping hundreds of kits, coding the corn cobs, etc is not trivial work.

That is where the energy died.

In the following weeks I recommended gathering the data, analyzing it and publishing.

Karl insisted that we'd complete the work, and that he had a few more kits to send out and we were waiting on data from a few more people.

One year goes by.  He finally closes the two-week experiment.

After that it was like watching grass grow-- if you sprayed it with Roundup.

And I'm not saying that I was especially helpful in forcing it forward. Outside of occasional prodding, I also sat on data once or twice and didn't have time to commit 4-6 hours to certain measurements.  But there was no sense of urgency in the project and I can think of two times where something that could have taken a day took a week or two (maybe three or four).

This should have all been complete early in 2016.  I spent a substantial amount of time framing the paper and writing up the rationale, and leaving holes for the finalized results.   That died on a Google Drive.

The messages kept coming in on Experiment.com, "When are you guys going to publish this?"

I answered them, but mostly referred them to Karl.

To me this was the biggest problem.  We accepted funds to do the work and failed to deliver.  People were sending me angry emails.  This was ugly.

Over the last year I regularly prodded Karl-- can we please finish the project?

It still was not complete, three full years after its conception and almost three years since it should have been done.


Removed from the Project

Yesterday I received an email explaining that I was removed from the project from Karl and Anastasia.  They made sure it went to my Dean and Department Chair too. 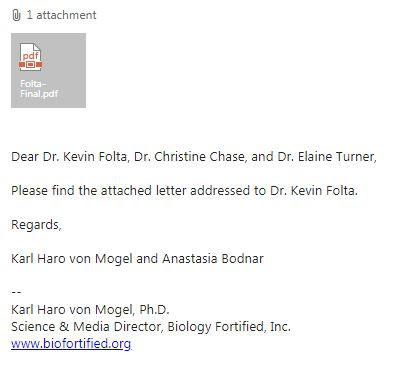 Gone are the days of civil conversations between adults. Someone has to tell on Folta, so weave in his Dean and Department Chair into a personal matter. Well done.


They basically told me to delete everything, that I'm off the project, and have nothing to do with it.


Can we Re-Write History?

This is the serious ethical question here.  We agreed to do this together three years ago.  If Karl and Anastasia would have invested minimal time in this work it would have been done long before any allegation of a conflict of interest (when my activities were fully disclosed to the extent I could discuss them).

Authorship and appropriate credit for work performed is critical in scientific publication.  You can't just remove someone and pretend they never contributed in a meaningful way.

Karl and Anastasia kind of get a pass on this because they don't publish their work and have slim exposure to the process.

I wrote wrote back and advised them:

Will Karl and Anastasia cross an ethical line here?  My guess is yes because their compass seems to be a little rusty. Not only did they publicly violate the confidential agreement of someone else, they also removed them from a project that needed to be completed ages ago.

I'm extremely disappointed with them, and if they publish the work and fail to acknowledge me as an author, we will discuss this matter with the journal, seek retraction, and correction.