The other day on Twitter I saw an unusual entry that led a popcorn trail to a new level of public records abuse at new taxpayer expense. 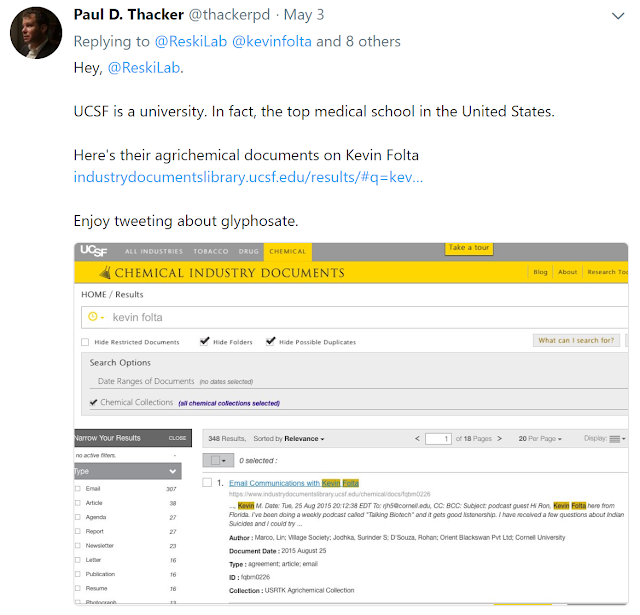 It’s my old buddy Paul Thacker, the guy that writesunfortunately inaccurate articles about me and others that ultimately endretracted or sporting corrections. He always seeks a way rub his stink on me, in a clear attempt to harm a public, academic scientist that teaches from the literature.

And in this case he does not disappoint.  He posts a curious website, the Industry Documents Library at the University of California San Francisco.  To Thacker and his buddies at US-RTK (the industry-funded hate group that seeks to silence and/or harm public scientists) this database has become a new repository for their “evidence” of foul connections between academics like me and the chemical industry.

Of the 4,000 documents in the Chemical Industry Archive I'm 10% of them, a lifelong public scientist that has 99% of his funding from public sources (USDA, NSF) and the Florida Strawberry Industry.

First, chemical industry?  Industry database?  The first entry is an email between me and folks at Cornell University.  They asked me to sign a recording waiver for my seminar, and I inquired if Prof. Ron Herring could join me on a podcast.  Chemical industry?

The second is me and UC Davis’ Dr. Alison Van Eenennaam.  Chemical industry?

Maybe there are some emails with friends in the seed companies in there somewhere.  I didn’t dig deep, but these are mostly personal emails between academics; me and another professor.  This is not illicit conversations with the “chemical industry.”

However, Thacker, Ruskin and company use the fact that these emails exist in this database as overwhelming evidence of malfeasance.  That’s spread via Twitter and other conduits.  Oh, and they put the emails in the database.

I called the UCSF Library and spoke with Kate Tasker.  She was polite, but insisted the documents were bona-fide proof of deep chemical industry collusion that were appropriately cataloged in that collection.

All the while Thacker and others exploit UCSF’s credibility to add gravity to their hateful false claims.

Where’s John Stossel when you need him?