But to Carrie Gillam this is rhetorical red meat, another way to sell a book, put dollars in her pocket, and advance a cause --- by exploiting credulous media and readers.

Her second recent article in the Guardian says that the herbicide formulation Roundup is more toxic to human cells than glyphosate alone.  This revelation has been published many times before in actual journals, so this is not new information, just time to stoke the fear fire a bit more. 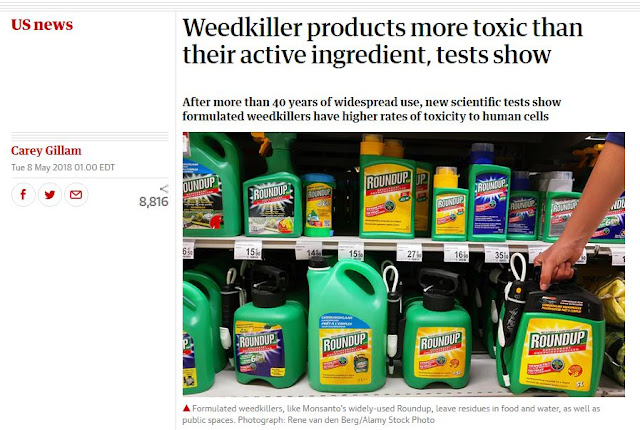 Yes, products formulated to penetrate cells are usually toxic to cells-- in a petri dish.  Use of the product on crops means your cells do not get the same exposure, and your body is not a layer of slime in a Petri dish.


Researchers have examined glyphosate for toxicity or endocrine disruption potential against tissue culture cells. These limited systems are great ways to start understanding how a compound might affect cells, which can then inform later studies in whole organisms.  If it doesn't affect slime in a dish, then it probably isn't going to do much to a metabolizing, living organism.

Time and time again it has been shown that glyphosate itself has no effect on cells in a dish until concentrations become massive.  However, the Roundup formulation does kill cells. Whatzzup?

Herbicides are composed of several key components-- the biology interfering chemical that kills the plant (in this case glyphosate) and other molecules that aid in its delivery.  Getting an plant-lethal compound into a plant cell can be quite a feat. Plants have waxy layers on their leaves to help retain water and serve as a physical barrier to pathogens. It keeps herbicides out pretty well too.

Because glyphosate works almost exclusively as a foliar herbicide, it must somehow penetrate into leaves. That means that formulations must contain a surfactant, a molecule like a detergent that allows for good surface contact and even facilitates movement across the waxy cuticle, cell walls and membranes.

Surfactants have detergent-like properties. At even marginal concentrations they will affect cells in a Petri dish. Just like a tiny bit of dish soap, shampoo, or Dr. Bonner's Pure Castile soap.

One of the best papers to illustrate the cytotoxic properties of the surfactants comes from Dr. Fiona Young's group. She shows that glyphosate has no effect on cells as an endocrine disruptor, and complete formulations become cytotoxic because of the surfactants.  I wrote about it here, and did a podcast with her discussing the work and activist distortions here.

This is how Gillam continues her deception, spinning a known finding (detergents kill cells in petri dishes at certain concentrations) to imply some sort of risk to humans when none is observed.

Remember, human cells in a culture dish are fragile critters. They respond to anything that doesn't belong in culture medium.  Adding a commercial formulation of an herbicide to cells and observing an effect is normal and expected.

But translating those findings to imply risk in the whole organism is not allowed. First humans are not exposed to the surfactant and herbicide in biologically relevant amounts. Second, surfactant and herbicide are independent molecules when encountered in tiny amounts- meaning they will be metabolized or excreted independently by the body, which is exactly what happens.

Of course, Gillam and the Guardian don't check with scientists. They have their story of deadly toxicity and they are sticking to it.  After all, it is not about science or truth. To them it is about advancing an agenda, selling a book, and promoting a bogus story that can instill fear about food and farming.